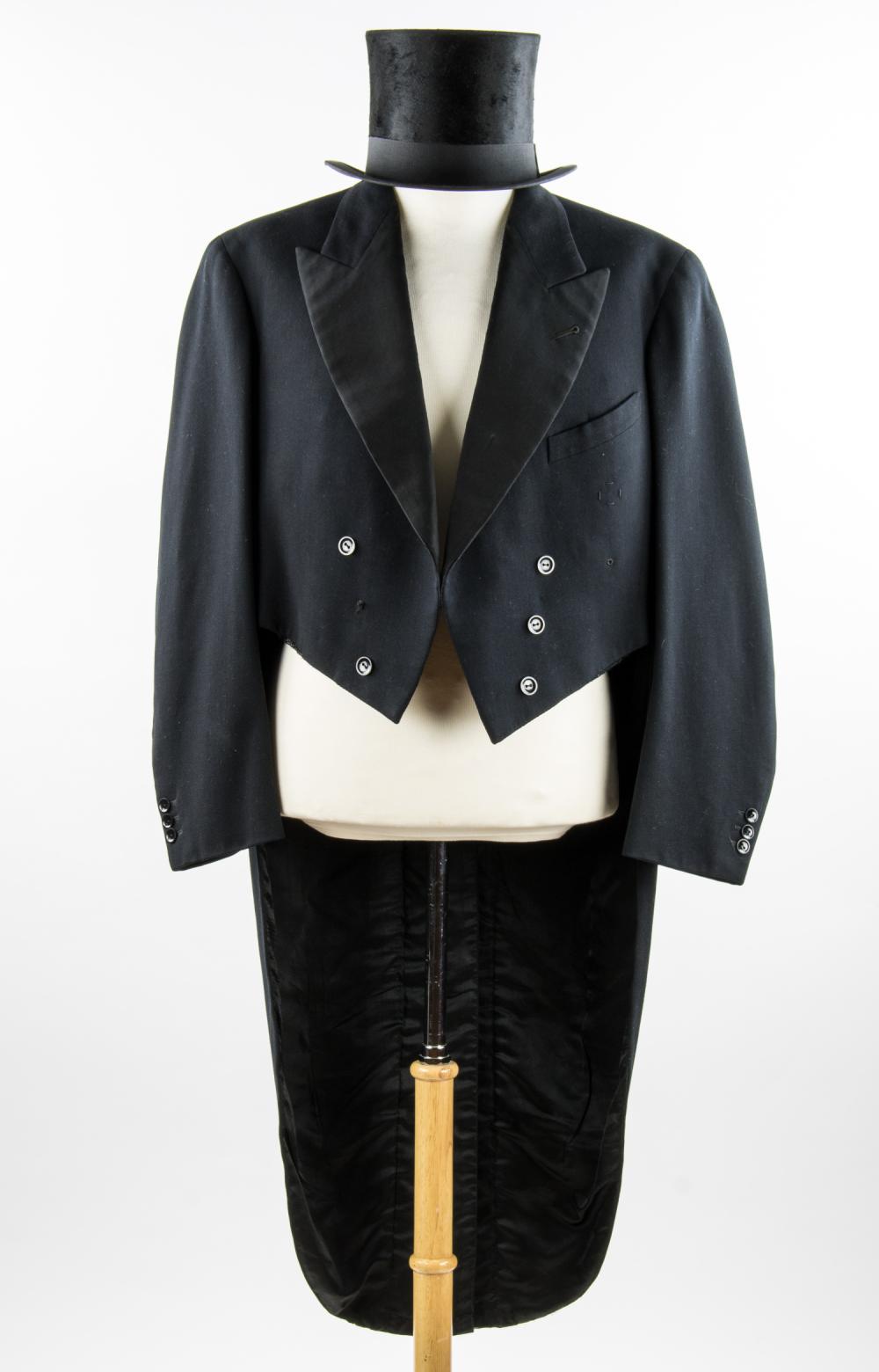 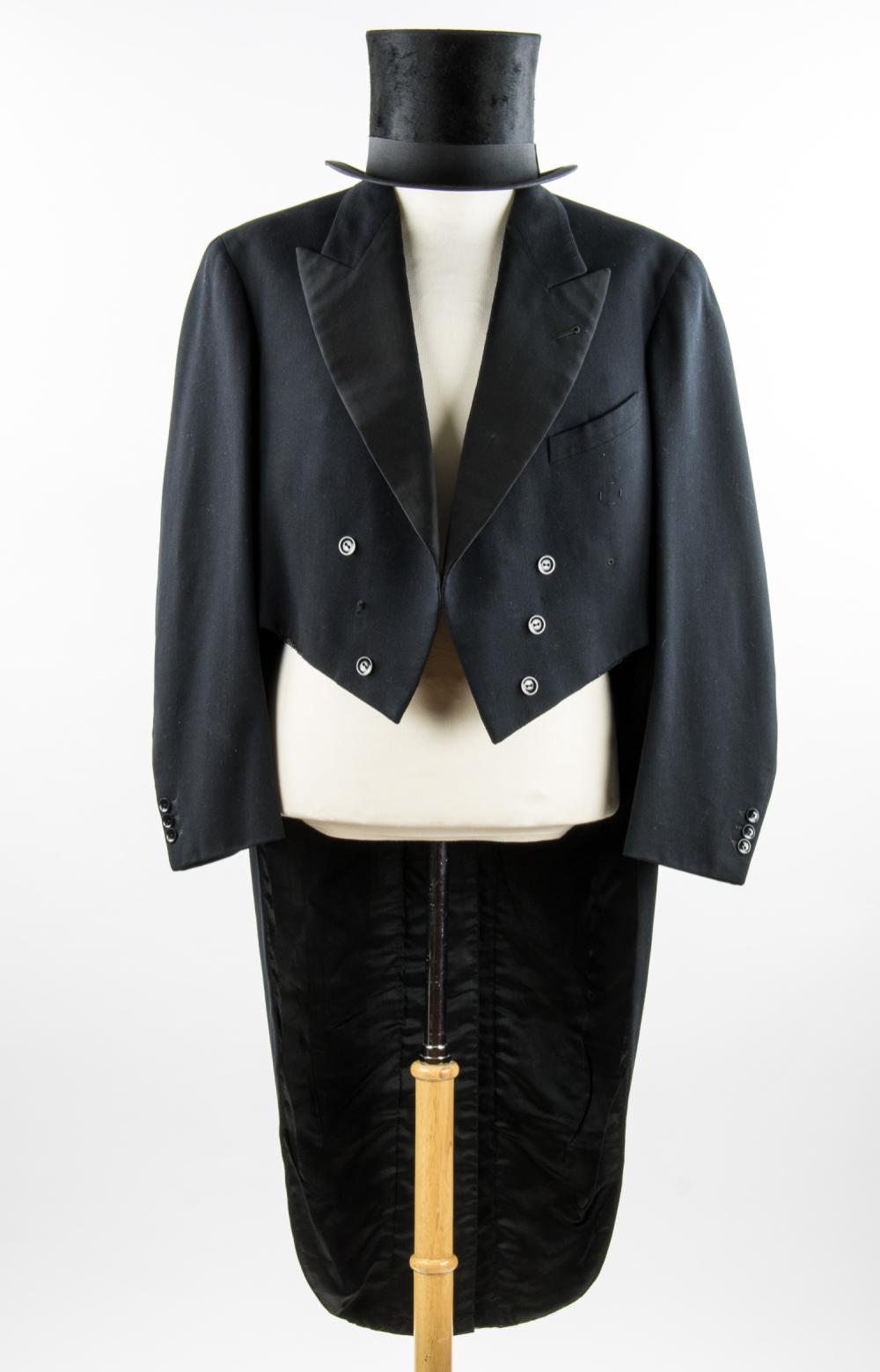 ADOLF HITLER'S BLACK FORMAL FROCK COAT AND TOP HAT
A superb pair of historic relics, including a fine formal wool and sateen diplomatic dress frock coat with full tails, satin lapels, and satin lining, owned and worn at the most important and prestigious state and formal functions by Nazi dictator Adolf Hitler. The coat bears three black Bakelite buttons at the end of each sleeve, and two of the original three fixing buttons on the front (one missing). The left breast bears a slanted slash pocket beneath which appear four professionally-sewn loops to accommodate Hitler's Iron Cross, First Class. Beneath these loops is a small thread reinforced opening, made to accommodate the Wound Badge Hitler received for a shrapnel injury at the Battle of the Somme. These were the only awards Hitler would wear. The coat is fully lined in black satin in the chest area with white satin within the sleeves. There is significant fraying at the neckline and in the armpit area, this due to original light wear further deteriorating over the years. The collar bears the label of the maker 'Kuhn & Nupnau Munchen', a top Munich tailor located at Maximilianplatz 12, in front of the Schiller monument who also made private-purchase military uniforms. There are two interior pockets as well, one bearing a pre-printed Kunh & Nupnau cloth label bearing details of the coat, reading: 'Herrn Reichskanzler Adolf Hitler Nr. 12581 S den 17.7.37' In excellent condition, with no damage beyond the missing button. Offered in addition to the frock coat is Hitler's matching long-haired (melusine) beaver felt top hat with black moire hat band and brim. The hat, 6 inches tall and 12 inches front-to-back along the brim, bears a 2.25 in. medium brown leather sweatband withing, interwoven with a decorative beige ribbon. An inspector has signed 'Schmid 275' on the inside of the band. Behind the sweatband is a paper label naming the maker and tying the hat to Hitler. It reads: 'Hutfabrik Jul. Thannhauser Munchen Lieferjahr 1936 Herrn. Reichskanzler Adolf Hitler Nr. 827 Modell: 'Wien' Kopfweite: 58'. The hat is lined in white silk and also bears the maker's name, address and insignia. Excellent condition. The hat is contained within a fitted hat box with the maker's name, and it rests upon a silk pad to hold the hat above the bottom of the box. A lid with wire handle is also present, and it is secured with two wire latches. The lid shows a negligible water stain, and a few dents, as does the hat box. These two relics are accompanied by a good deal of provenance. Included is a letter from the wife of Major Frank M. Sinclair, formerly a commanding officer of the 328th (Glider) Infantry Regiment, 101st Airborne. In her 1964 letter, Mrs. Sinclair states that her husband had found the hat and coat: '...in the ruins of Hitler's mountain home at Berchtesgaden/Obersalzberg. Given my personal knowledge of my husband's acquisition of this [sic] two items, I can states with certainty that they once belonged to Adolf Hitler and were taken from his mountain home...' She transfers the items to Douglas Finey, and her letter is on Finey's "American Airborne Center" letterhead - probably a small museum. The 325th through 328th Glider Infantry Regiments were combined under the name of the 327th (Glider) Infantry Regiment. which was originally attached to the 82nd Airborne, before being reassigned to the 101st Airborne in August, 1942. Part of the regiment landed on Utah Beach on D-Day due to the scarcity of air transport, and the regiment fought its way inland to Carentan. The regiment played a pivotal role in Operation Market Garden, with 30% of its gliders lost and some companies taking over 65% casualties. At Bastogne, the 327th held half of the perimeter, fending off determined attacks by Volksgrenadiers and the elite Panzer Lehr. Finally, elements of the 327th (and Major Sinclair) occupied Berchtesgaden for several days from May 5, 1945, forward, arriving only hours after the first Americans took over control of the town. At some point in time, noted German militaria dealer Helmut Weize in Hamburg obtained these pieces from Finey or another owner thereafter, and Weitze sold them to Ron Manion in 2001, as attested to in a 2005 letter from Manion. Also included are condition reports for each item and an assessment of the grouping by noted militaria expert and dealer Donald J. Boyle. Boyle's certificates set forth his belief that both items predate 1945 and 'have not been altered in any way', and he further opines that Mrs. Sinclair's letter was written ca. 1964 as well. There are dozens of images of Hitler wearing top hats and coats identical to the apparel offered here, most commonly while attending the opera in Berlin or Nuremberg, and certainly while at the Wagner festivals at Bayreuth which he would attend with Winifred Wagner. Such apparel would also be called for at other formal events, including diplomatic affairs, state dinners, and so on. In November, 2019 another of Hitler's formal top hats alone sold in Germany for $55,000.