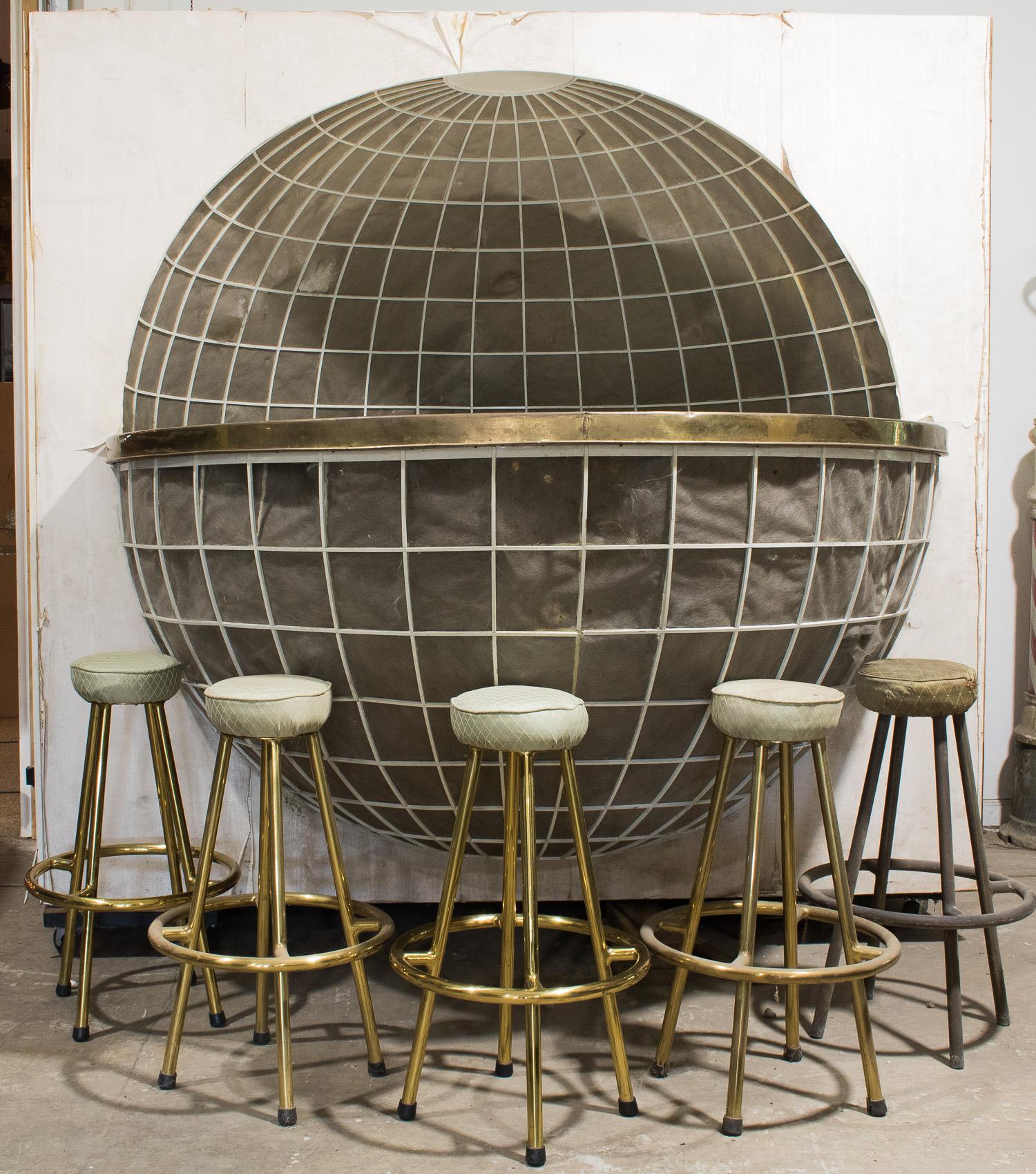 Description:
Offered here is probably one of the most fascinating Hitler relics ever offered - the complete bar and five bar stools removed from Adolf Hitler's yacht 'Aviso Grille' at the time the vessel was scrapped. The bar and stools have remained untouched in a home and barn in rural Maryland for seventy years, kept by the son of the original purchaser who had installed the bar in his home's basement as a curiosity. The bar, fittingly, resembles the 'world' which Hitler hoped to conquer! Actual parts removed from the 'Grille' include the aluminum bar surface with integral sink and Art Deco brass faucet. The bar surface is hemispherically-shaped, 61 in. wide and 33 in. deep (widest measurements). Also recovered is the brass trim at the front of the bar, and in the rear of the bar, under the 'upper hemisphere', as well as the upper and lower 'hemispheres' themselves. These are solid fabrications, constructed of .25 in. steel bar welded at every intersection. Both 'hemispheres' are lined with white (soiled) cloth, not original but identical to the covering seen in photographs of the bar while onboard the vessel. The 'hemispheres' are arranged so as to the viewer looking at them directly from the front, one sees the earth cross-cut by longitudinal and latitudinal lines. The buyer had illuminated the 'hemispheres' from within - this lighting has not been tested and could easily be removed. Also removed from the 'Grille' were five original brass bar stools with padded seats, each 33 in. tall overall. Four of the stools were carefully cleaned and recovered with fabric approximating the original, while the fifth stool is entirely original (padded seat unattached). Once the bar was removed from the 'Aviso Grille', its new owner constructed a wheeled, wood-framed functional support to allow the bar to be used. It bears cabinets and shelves, though there is some damage to some shelves and the rear of the bar, easily repaired. The entire bar now measures 78 in. tall, 98 in. wide, and 90 in. front to back. The bartender accesses the bar through a small door low on either side. Interior dimensions (max.) are 74 in. left to right, 33 in. front to back, and 78 in. height. Sold with a notarized Letter of Provenance from the owner who describes the circumstances of its purchase: '...My father...was close friends with the owner of Doan Salvage Yard. The yard owner personally invited him to the yard and gave him the opportunity to purchase the world bar...' This obviously is a large, cumbersome piece and is in a third-party location where it may be viewed by appointment only, in the Elkton, Maryland area. It is sold 'as is, where is' and must be removed by the buyer NO LATER than ten days after the closing date of the sale, at buyer's risk and expense, or the lot will be relocated at buyer's risk and expense. Auctioneer will be able to provide the names of movers who may be able to assist. This is simply a fantastic relic, symbolic of the false grandeur and excesses of Hitler's 'Hundred Year Reich'. 'The White Swan of the Baltic', as Hitler called his 377-foot yacht 'Aviso Grille', would entertain the the highest echelons of the Nazi administration and military. Her 30+ staterooms housed guests including Benito Mussolini, Hermann Goring, Joseph Goebbels, Miklos Horthy, Hess, and many others from Germany and the Axis countries. Hitler was the most frequent visitor, showing off his ship and usually spending three or four nights on board. According to the captain of the vessel, Hitler objected strenuously to drinking and often gave his staff violent temperance lectures. Shortly after having been subjected to one such harangue on board the Grille, the staff gathered in the saloon to sooth their frayed nerves with a bottle of champagne. Suddenly Hitler appeared in the doorway and the bottle, which had just been opened, was discreetly hidden beneath a table. Hitler strode into the room, kicked the bottle, spilling its contents, turned on his heels, and walked out without uttering a word. The Grille was originally a dispatch boat built in 1934 and then assigned as a state yacht by Adolf Hitler. After the start of World War II, she was repurposed as a minelayer and as a patrol vessel in the Baltic Sea, tasked with searching for enemy merchant vessels. From August 1941 until March 1942, she served as a headquarters ship for the commander of naval forces based in occupied Norway. Her service diminished over the course of the war, and on May 1, 1945 Grand-Admiral Donitz announced the death of Hitler from the foredeck of the vessel. It is recorded in the ship¹s log 'that he, acting on the Fuhrer¹s orders, had assumed leadership of the German nation and supreme command of the fighting forces.' Seized by British forces as war reparations in 1945, she was later first sold to a Canadian businessman, then resold to a Lebanese investor who tentatively had a deal to sell it to Egypt's King Farouk. In a measure of caution, Jewish saboteurs unsuccessfully attempted to sink the vessel with limpet mines in Malta Harbor. As a result, Farouk backed out of his deal. After repairs were completed, the owner brought the ship to the United States in 1949 in an unsuccessful attempt to find a buyer. He ultimately sold 'Grille' for scrap in 1951 to the North American Smelting and Refining Company, and it was later towed to the Doan Salvage Yard in New Jersey and broken-up.