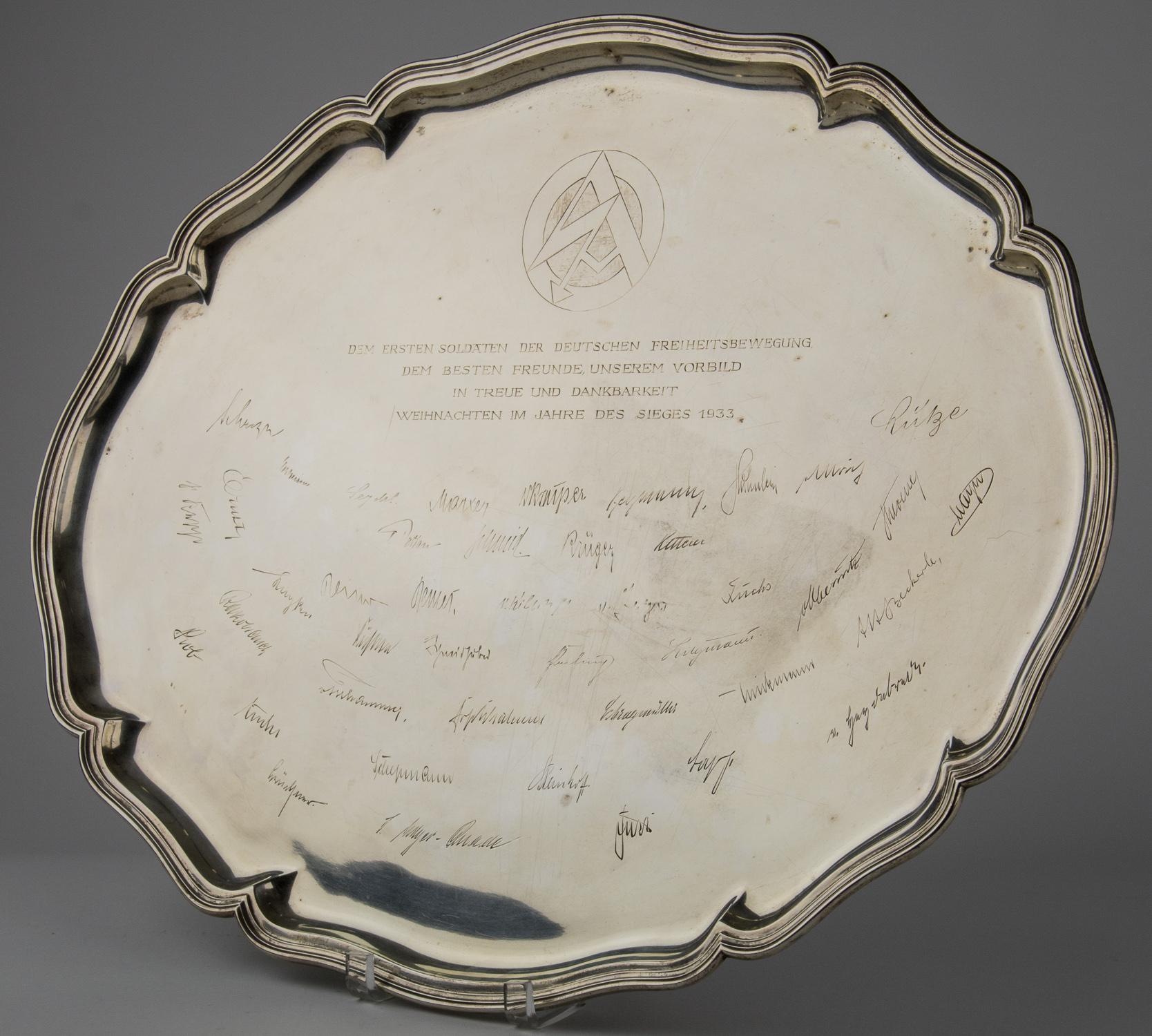 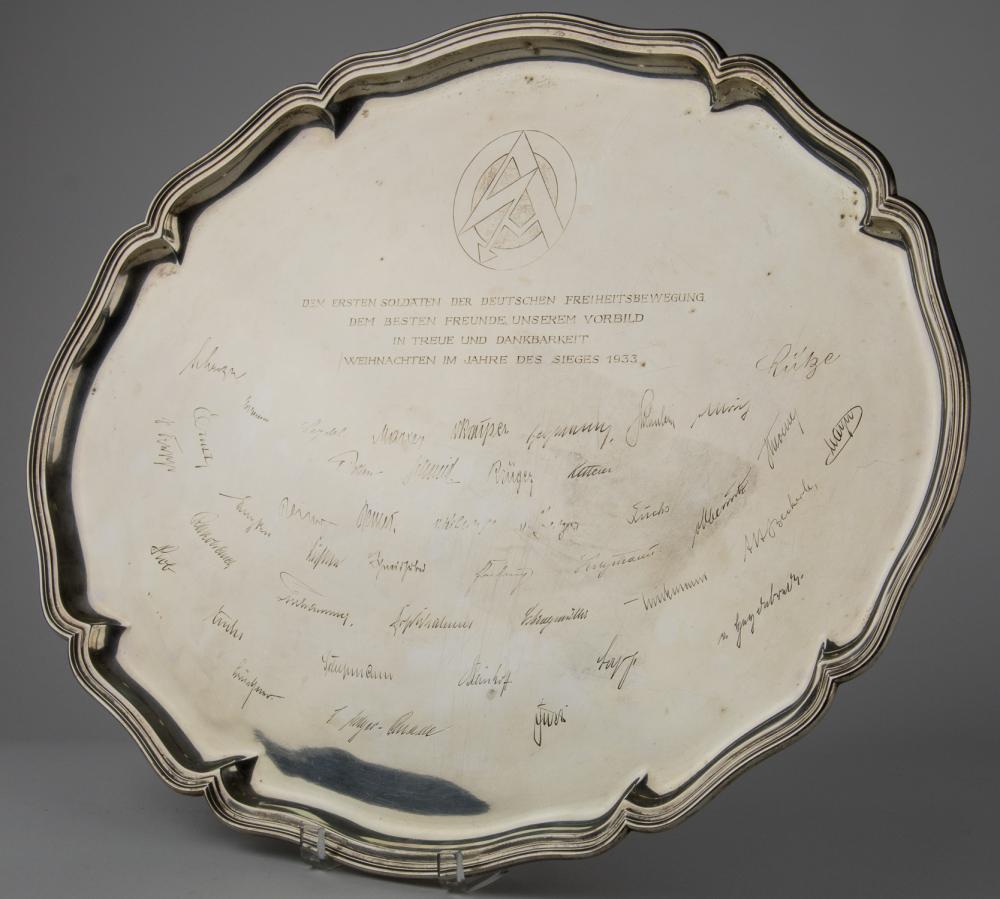 
An incredible find, a sterling silver presentation platter bearing a dedication to S.A. leader ERNST ROHM (1887-1934) with the engraved facsimile signatures of 43 S.A.-Obergruppenfuhrers and S.A.-Gruppenfuhrers - many of whom would soon be murdered with their leader during the 'Night of the Long Knives' purge. The 23.5 x 18.75 in. platter bears a fluted edge and otherwise smooth surface. The presentation inscription reads: 'TO THE FIRST SOLDIER OF THE GERMAN FREEDOM MOVEMENT, TO THE BEST FRIEND, OUR PARAGON IN LOYALTY AND GRATITUDE CHRISTMAS IN THE YEAR OF VICTORY 1933' Above the inscription appears a 3 in. wide engraved S.A. emblem. Beneath appear the signatures of 43 top S.A. officers of whom we have been able to identify 32. Those marked with an asterisk (*) would, like their leader Ernst Rohm, meet death six months later in Hitler's purge of the S.A. to consolidate his power. Signatures identified include: ADOLF HEINZE BECKERLE (1902-1976), SA officer and diplomat who played a significant role in the Holocaust in Bulgaria; WILHELM BRUCKNER (1884–1954), Hitler's chief adjutant until October 1940, later a Heer colonel; GEORG VON DETTEN(*), who held an incriminating file on Goebbels; KARL ERNST(*) (1904-1934), SA-Gruppenfuhrer who, in early 1933, was the SA leader in Berlin. Hitler had stood as his best man; JOHANN BAPTIST FUCHS (1877-1938), SA-Obergruppenfuhrer; HANS HAYN(*) (1896-1934) Together with Albert Leo Schlageter , he carried out dynamite attacks on French facilities as the leader of a sabotage squad. Headed the Silesian SA and SA Group Saxony, the largest in the country, also a Reichstag member; ADOLF HUEHNLEIN (1881–1942), Leader of the National Socialist Motor Corps (NSKK); PETYER VON HEYDEBRECK(*), (1889-1934), Freikorps and SA leader, member of the Reichstag; DIETRICH VON JAGOW (1892-1945), naval officer, politician, SA Obergruppenfuhrer and diplomat; EMIL KETTERER (1883-1959), Olympic athlete, an ardent Nazi and SA-Obergruppenfuhrer. As a medical doctor, he was involved in approval and promotion of euthanasia under the Nazi regime; MANFRED VON KILLINGER(*) (1886-1944), naval officer, Freikorps leader, military writer and Nazi politician; ADOLF KOB, FRITZ VON KRAUSSER(*) (1888-1934), a member of the Reichstag and SA upper group leader; FRIEDRICH-WILHELM KRUGER (1894-1945), a high-ranking member of the SA and the SS, Higher SS and Police Leader in Poland, and in that capacity he organized and supervised numerous acts of crimes against humanity and had a major responsibility for the German genocide in Poland; 1894[1] – 10 May 1945) was a Nazi official and high-ranking member of the SA and the SS. Between 1939 and 1943 he was the Higher SS and Police Leader[2] in the General Government in German-occupied Poland, and in that capacity he organized and supervised numerous acts of crimes against humanity and had a major responsibility for the German genocide in Poland, KARL SIEGMUND LITZMANN (1893-1945), General Commissioner for Estonia during the German occupation; VIKTOR LUTZE (1890-1943), commander of the SA succeeding Ernst Rohm; MAX LUYKEN (1885-1945) head of the main education office of the SA leadership; OTTO MARXER, JOACHIM MEYER QUADE (1897-1939), SA Obergruppenfuhrer, ordered the 'Kristallnacht' destruction in Schleswig-Holstein;
HANNS GUNTHER VON OBERNITZ (1899-1944), SA Obergruppenfuhrer, police chief of Nuremberg, organized the pogroms there in 1938; ARTHOR RAKOBRANDT, ROLF REINER, WILHELM SCHEPMANN (1894-1970), last Chief of Staff of the SA; WILHELM SCHMID(*) (1889-1934) Munich SA leader - Hitler personally tore off his medals before sending him to his execution; AUGUST SCHNEIDHUBER(*) (1887-1934) SA leader and police chief in Munich; KONRAD SCHRAGMUELLER(*) (1895-1934) SA group leader, police president of Magdeburg and member of the Reichstag; KARL SCHREYER, JOSEPH SEYDEL, EMIL STEINHOFF (1883-1953), Leader of SA groups Thuringia, Westmark with Koblenz-Trier and Pfalz-Saar, Hesse and Southwest; HANS VON TSCHAMMER UND OSTEN (1887-1943) Reichssportfuhrer and organizer of the 1936 Olympics; and CURT VON ULRICH (1876-1946), SA leader, later President of the Prussian Province of Saxony. The underside of the platter bears an '830' purity mark and hallmark of silversmiths Wilkens & Sohne, Bremen. 1933 was indeed the 'Year of Victory' for Hitler, Rohm, and the S.A. Had it not been for the S.A.'s brutal intimidation of voters and the opposition, Hitler would never have been elected. Now that his power was consolidated and with Heinrich Himmler's SS firmly entrenched as his 'corps de garde', Hitler shrewdly decided to remove Rohm - the only person who could challenge his power and position. This tray originates directly from the estate of JOHN G. ERHARDT (1889-1951) American Consul in Hamburg in the early 1930s and Consul in London under Ambassador Joseph Kennedy. During the war, Erhardt was in a high-level State Department position in Washington, where he was involved in the planning of the surrender of Germany and occupation of Germany and Austria. After the war, he served as de facto Ambassador to Austria and as political adviser to Gen. Mark Clark, who led the American occupation military forces in Austria and who probably presented Erhardt with this 'souvenir'. Of course, Erhardt may have been given the platter directly by a friendly Nazi while serving as Consul in Hamburg, 1933-36, perhaps to demonstrate Hitler's new-found 'civilized' behavior?