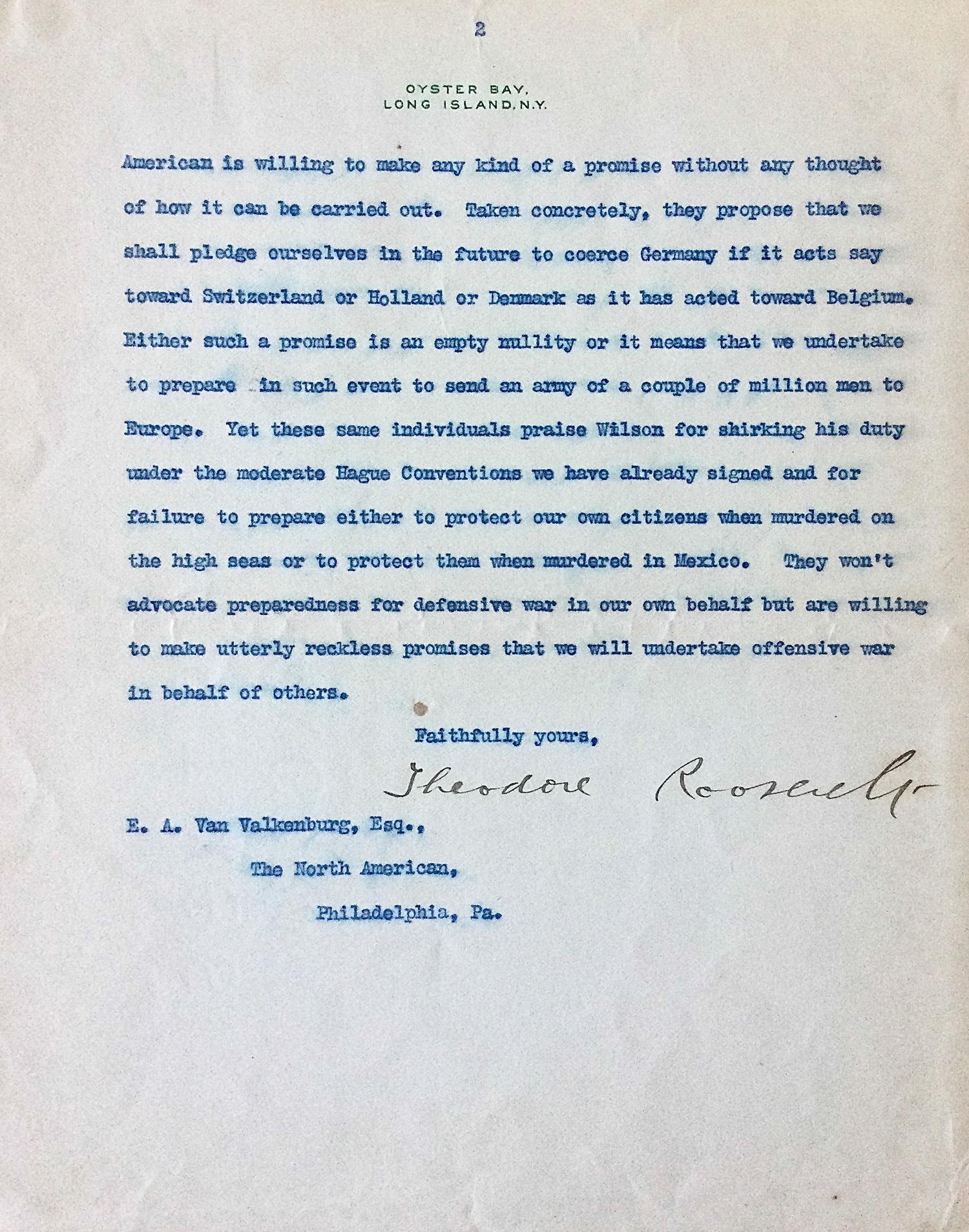 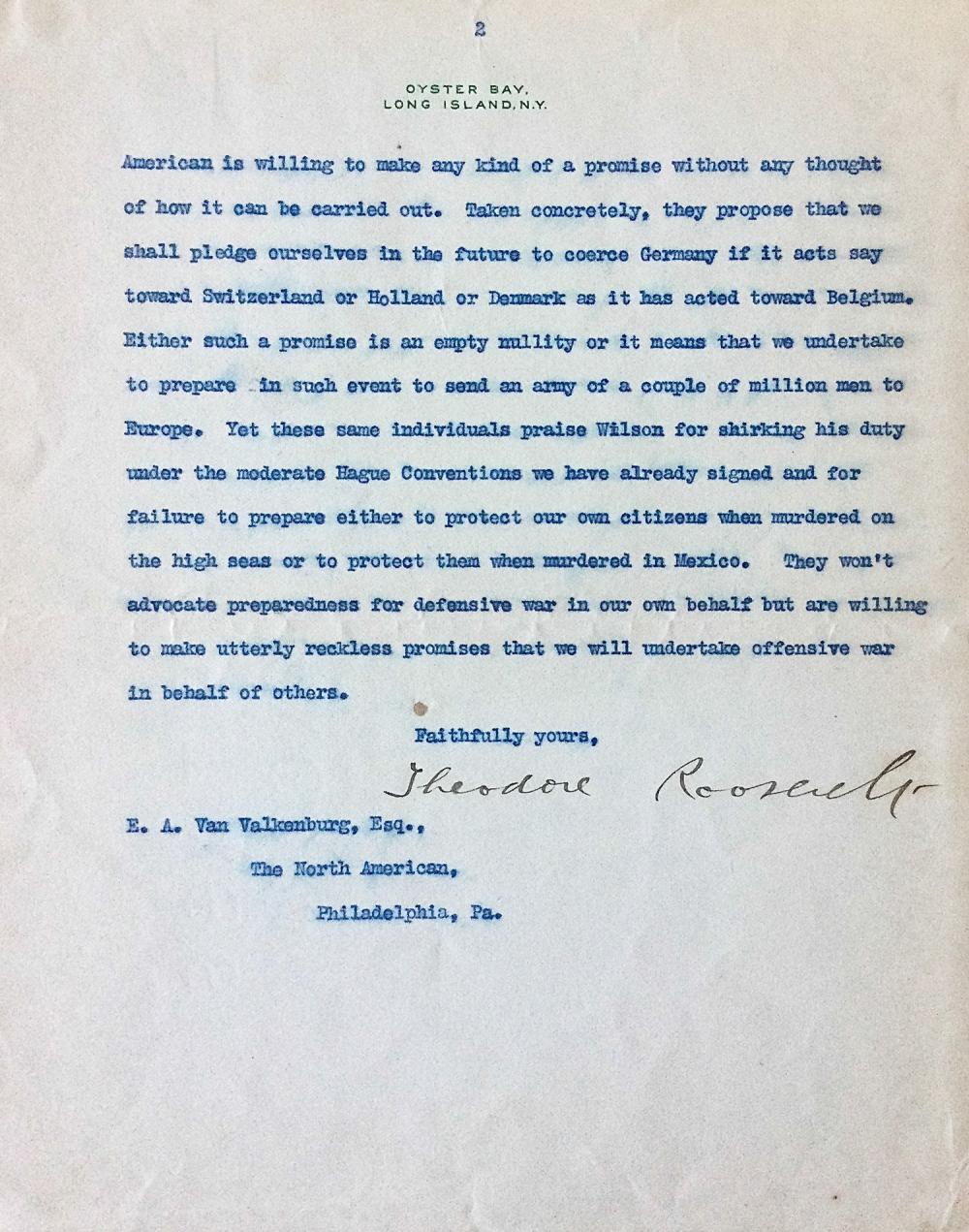 THEODORE ROOSEVELT
(1858 - 1919) Twenty-sixth President of the United States who started the Panama Canal, settled the Russo-Japanese War, broke up Standard Oil and encouraged conservation. ROOSEVELT LAMBASTES A HAWKISH FORERUNNER OF THE LEAGUE OF NATIONS Important, fine content T.L.S., 2pp. 4to., Oyster Bay, June 29, 1915, a lofty and biting criticism of the interventionist 'League for International World Peace', addressed to E. A. Van Valkenburg. In large part: '...there is one point about those gentlemen who support a League for International World Peace that is worth-while considering. Six months ago or more I outlined the program which they announced they had just discovered the other day. But I then very emphatically stated that it was a program for the future and that our first business was to make good the promises we had already made and to put ourselves in position to defend our own rights. These gentlemen declined to say a word in favor of our fitting ourselves to go into defensive war in our own interest; and yet they actually wish to make us at this time promise to undertake offensive war in the interests of other people! It is a striking illustration of the recklessness with which the average American is willing to make any kind of a promise without any thought of how it can be carried out...they propose that we shall pledge ourselves in the future to coerce Germany if it acts say toward Switzerland or Holland or Denmark as it has acted toward Belgium. Either such a promise is an empty nullity or it means that we undertake to prepare in such event to send an army of a couple of million men to Europe. Yet these same individuals praise Wilson for shirking his duty under the moderate Hague Conventions we have already signed and for failure to prepare either to protect our own citizens when murdered on the high seas or to protect them when murdered in Mexico. They won't advocate preparedness for defensive war in our own behalf but are willing to make utterly reckless promises that we will undertake offensive war on behalf of others...' Roosevelt signs in full at the conclusion, adding some holograph additions for emphasis on the first page. A few spots of soiling, small creases, else fine. Roosevelt, in coordination with Republican leaders Henry Cabot Lodge and William Howard Taft, began offering proposals for a 'League of Nations' to guarantee world peace as early as 1905. In September 1914, he proposed 'a World League for the Peace of Righteousness' after the start of World War I, adding that it should be 'solemnly covenanted that if any nations refused to abide by the decisions of such a court, then others draw the sword in behalf of peace and justice.' The next year, he urged that nations should guarantee their entire military force, if necessary, against any nation that refused to carry out arbitration decrees or violated rights of other nations. However, he took issue with Wilson's plan, both because he detested Wilson and because it might interfere with American domestic affairs, submitting the U.S. to the whims of smaller nations who may not share our national interests. Similar concerns led to America's refusal to even join the League of Nations once it was finally adopted. When the U.S. finally joined in the war in Europe, Roosevelt was devastated when his youngest son Quentin was killed in aerial combat over France on Bastille Day (July 14), 1918.