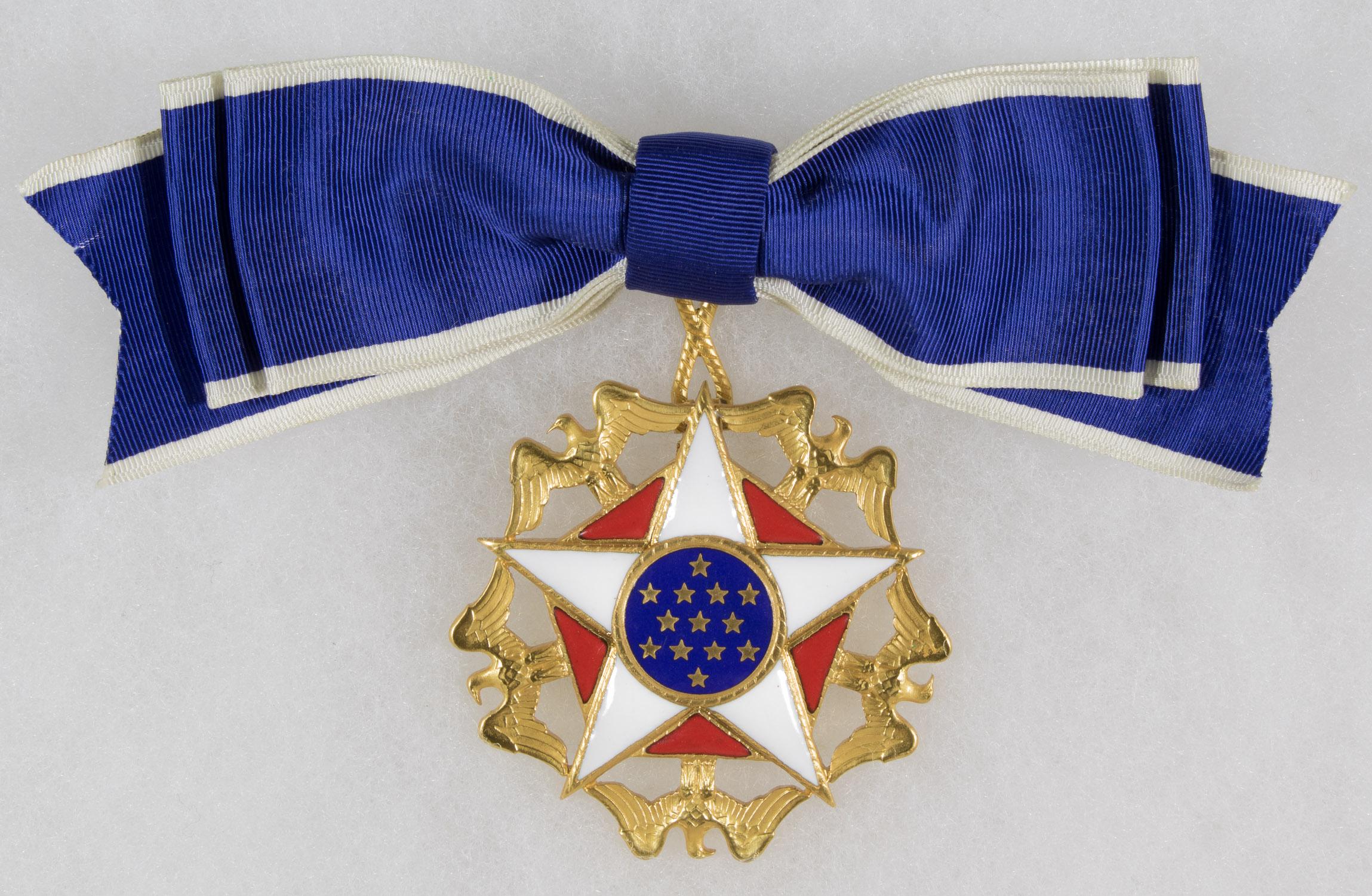 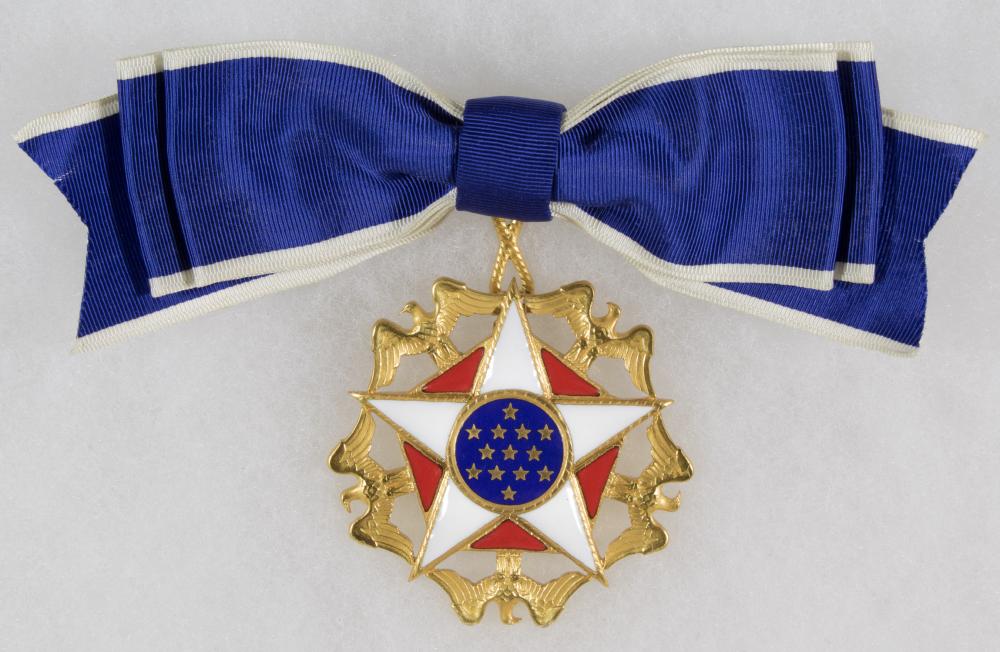 
An incredibly rarity, an original Presidential Medal of Freedom presented to actress MARTHA RAYE (1916 - 1994) by President Bill Clinton on November 2, 1993. The medal, approx. 2.25 in. dia., takes the form of a golden star with white enamel, with a red enamel pentagon and a blue enamel central disc. The disc bears thirteen gold stars, taken from the Seal of the United States, within a golden ring. Golden spread-winged bald eagles stand between the points of the star. The reverse side bears her engraved name 'MARTHA RAYE' and the date of her awarding 'NOVEMBER 2, 1993'. The blue ribbon above has been presented in the form of a bow, as was customary for many female recipients. The medal is accompanied by a service ribbon, bearing a spread-winged eagle affixed atop a blue ribbon. Very slight scuffs to the reverse side, else in near mint condition. Sold within an original wooden presentation box with blue felt backing, approx. 7.25 x 7.25 x 2 in. closed with a clasp at front and bearing an inset metal U.S. seal at top of the lid. Sold with a prophetic T.L.S. (autopen-signature) from Bill Clinton on Clinton/Gore campaign letterhead, sent on Raye's birthday one year before his first term as President, 1p. 4to., Aug. 27, 1992, reading in part: 'The party honoring one of the greatest ladies in show business is surely grand…Martha, not only have you thrilled theatre goers for years with your enormous talent, your good heart, and your love of life, but also you have been a respected citizen…I admire you and commend you for your tireless efforts to entertain our troops in three wars…I know you have been nominated for the Presidential Medal of Freedom. You deserve it…and I'd be thrilled if things go well to be able to present it to you!' He boldly signs 'Bill Clinton' in blue ink at the conclusions. Beautifully triple-matted and framed to a total size of 16.5 x 19 in. Folds, light blue staining at bottom-left, else fine. Sold with a T.L.S. from BOB HOPE (1903 - 2003) on his personal letterhead, 1p. 4to., [n.p.], Oct. 26, 1994, sent to a representative of the Friars Club regarding Raye's memorial services: 'Martha was sunshine. She probably had the biggest heart in Hollywood…she as always 'bigger than life'. And she was more popular with the GIs than a weekend pass. They loved her in Vietnam…she played hillsides and foxholes. She played permitted outposts, radar bases, PT boats…she earned the love, respect, and admiration of every homesick guy in uniform…she was a great gall, a great woman and a great lady. Maggie of the Boondocks will be greatly missed…by me and by millions.' Sold with some pieces of correspondence and cards sent from and addressed to her in Vietnam, with at least four bearing her signature. MARTHA RAYE (born Margy Reed; (1916–1994) and nicknamed 'The Big Mouth', was a comic actress and singer who performed in movies, and later on television. She also acted in plays, including on Broadway. Raye was the fifth person to be awarded Honorary Green Beret, and while in Vietnam she would assist those in combat hospitals instead of performing because as was a licensed nurse. She was honored in 1969 at the Academy Awards as the Jean Hersholt Humanitarian Award recipient for her volunteer efforts and services to the troops, in addition to receiving this distinguished award. Raye was buried with full military honors in the Fort Bragg, North Carolina, post cemetery as both an honorary colonel in the U.S. Marines and an honorary lieutenant colonel in the U.S. Army.