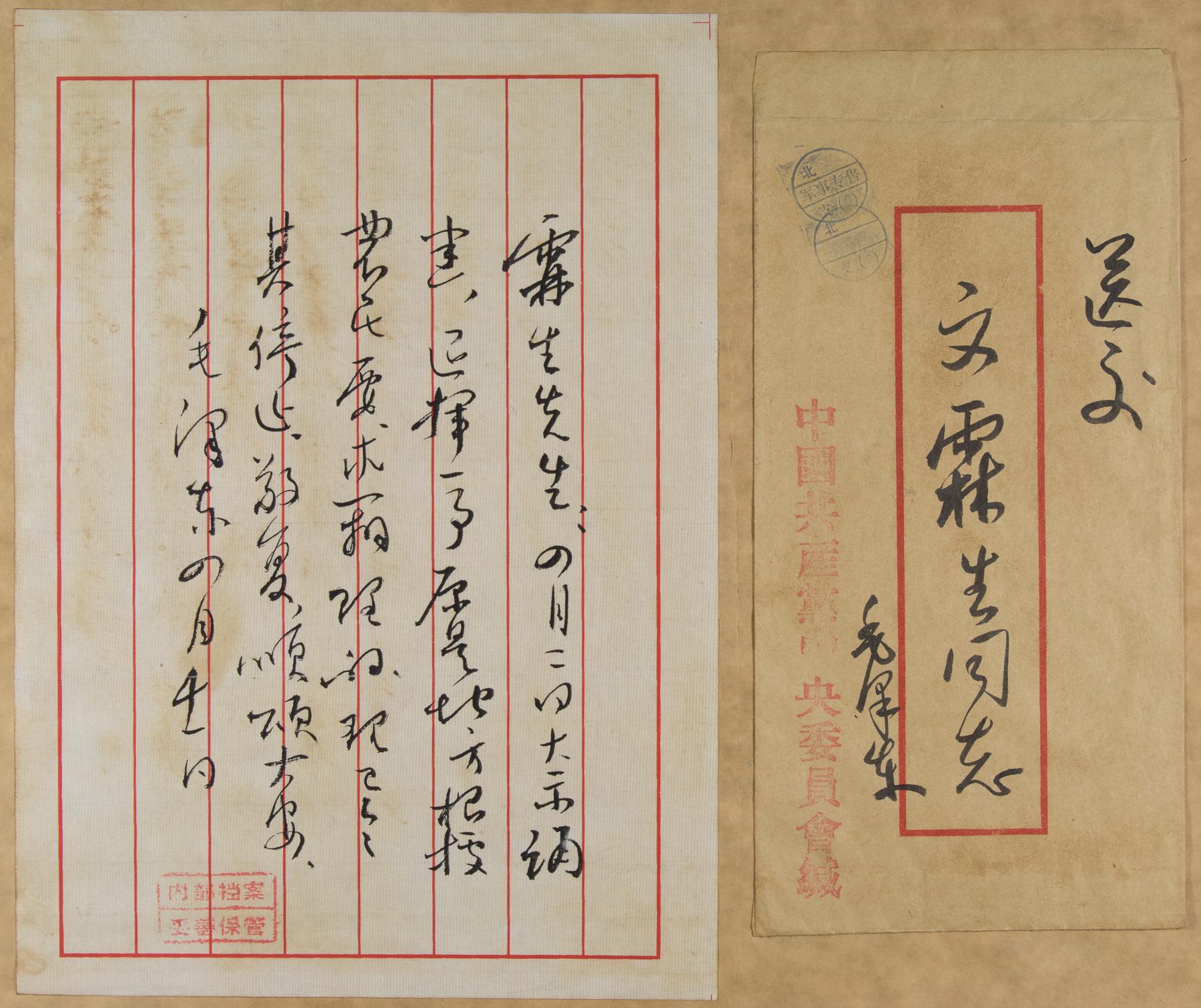 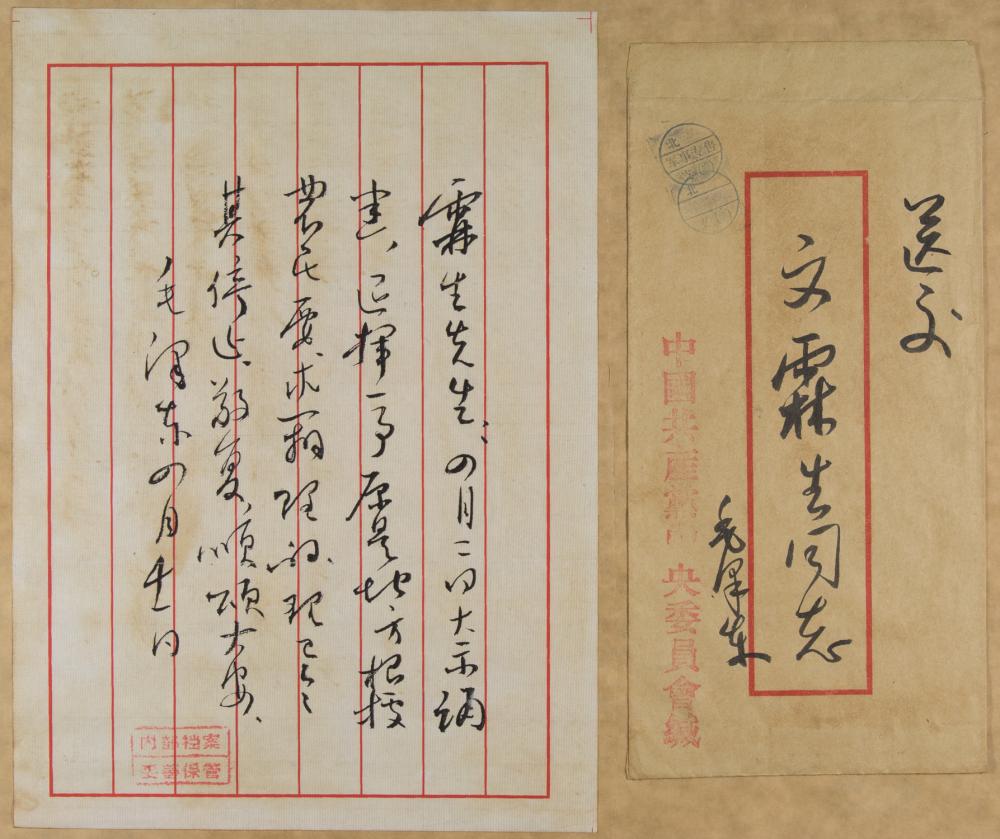 MAO ZEDONG
MAO ZEDONG (1893 - 1976) Chinese statesman, commonly known as 'Chairman Mao, a communist revolutionary who became the founding father of the People's Republic of China, which he ruled as the Chairman of the Communist Party of China from its establishment in 1949 until his death in 1976. Mao helped to found the Chinese Workers' and Peasants' Red Army, and in 1949 Mao's forces defeated the Nationalist government of Chiang Kai-Shek. On October 1, 1949, Mao proclaimed the foundation of the People's Republic of China. AN OFFICIAL LETTER AND SIGNED ENVELOPE An excessively rare pair of signed items, including an official signed governmental letter and a signed transmittal envelope which enclosed the letter, both sent in 1950 to LIU LINSHENG (given name: Liu Kuiyi) (1878-1950), Mao's second cousin on his mother's side, and he carried the honorary title 'Linsheng'. At the time he received this letter, Liu was serving as Party Leader in Hunan Province, a patronage position granted to him by Mao. Liu and Mao had both grown up in the same small village, about 1,500 miles from Beijing, and Liu's brother had been a martyr in revolutionary activities against the Qing Government. The 8 x 11 inch letter, dated April 14, 1950, was hand-executed by an amanuenses on period Chinese ruled paper and is signed in Mao's hand. It reads in full: 'Mr. Linsheng: Thank you so much for the message on the 2nd of April. The local government has been asked to stop to return the deposit, which was originally requested by peasants. Best wishes and with regards, Mao Zedong, April 14th'. A red ink stamp at bottom reads: 'Internal Archive. Handle with Care', likely placed there by Liu prior to filing. The accompanying signed envelope, 9.75 x 4.75 inches, is entirely in Mao's hand and reads in full: 'Deliver to Comrade Wen Linsheng (signed) Mao Zedong ['Wen' was Mao's maternal grandmother's name - its use here was likely honorific]. To the left of Mao's signature appear eleven red ink stamped characters reading: 'The Central Committee of Chinese Communist Sealed'. With no address indicated, this letter must have been delivered by an official courier directly into Liu's hands. Above these characters appear to blue circular stamps, faded a bit, apparently reading: 'North Branch...Sold Only for Military Purpose/Service'. This letter was the last of a series of letters exchanged between Mao and Liu dealing with the theft of rice in Hunan Province. Liu would die a few months after its receipt, and the letter later found its way to auction in Australia where it was purchased by our consignor. Both pieces are mounted to paper which in turn was mounted to cardboard, probably by the family shortly after their receipt. Liu was not a major figure in the Chinese Revolution, but a biography of his life was written and is in the holdings of 30 national libraries (three in China). 'The Collected Works of Liu Kuiyi' was published by Hunan Renmin Publishing in 2008 and contains the original text of this letter. As Liu died shortly after receiving this letter, no instruction was left for it to be eventually sent to Beijing for inclusion among Mao's writings. Our consignor utilized an extensive network of experts to research and examine these items, and included with the letter and envelope is a 108pp. folder of the result of their efforts. Notable is the handwriting analysis of Forensic Document Examiner Reed C. Hayes, who used twelve known examples of Mao's span in his 21-page positive report. Expert Chelsea Juexi Wang, MA of Curating and Cultural Leadership, University of New South Wales and Asian Art Consultant also reviewed and compared twelve known examples of Mao's hand from various letters and documents to the letter offered here. Her 28-page illustrated report also reached a positive conclusion. Wang also wrote a multi-page analysis of the paper, envelope, chops, and stamps, and undertook additional research on Liu. Additional information includes an image of the letter as reproduced in Liu's 'Collected Works', a history of Liu's family, a biography of Mao Zedong, a study of Chinese calligraphy, and a recapitulation of facts concerning the document and its origin. A hitherto undiscovered Mao letter, a directive sent to a direct relative and lost for over seventy years!