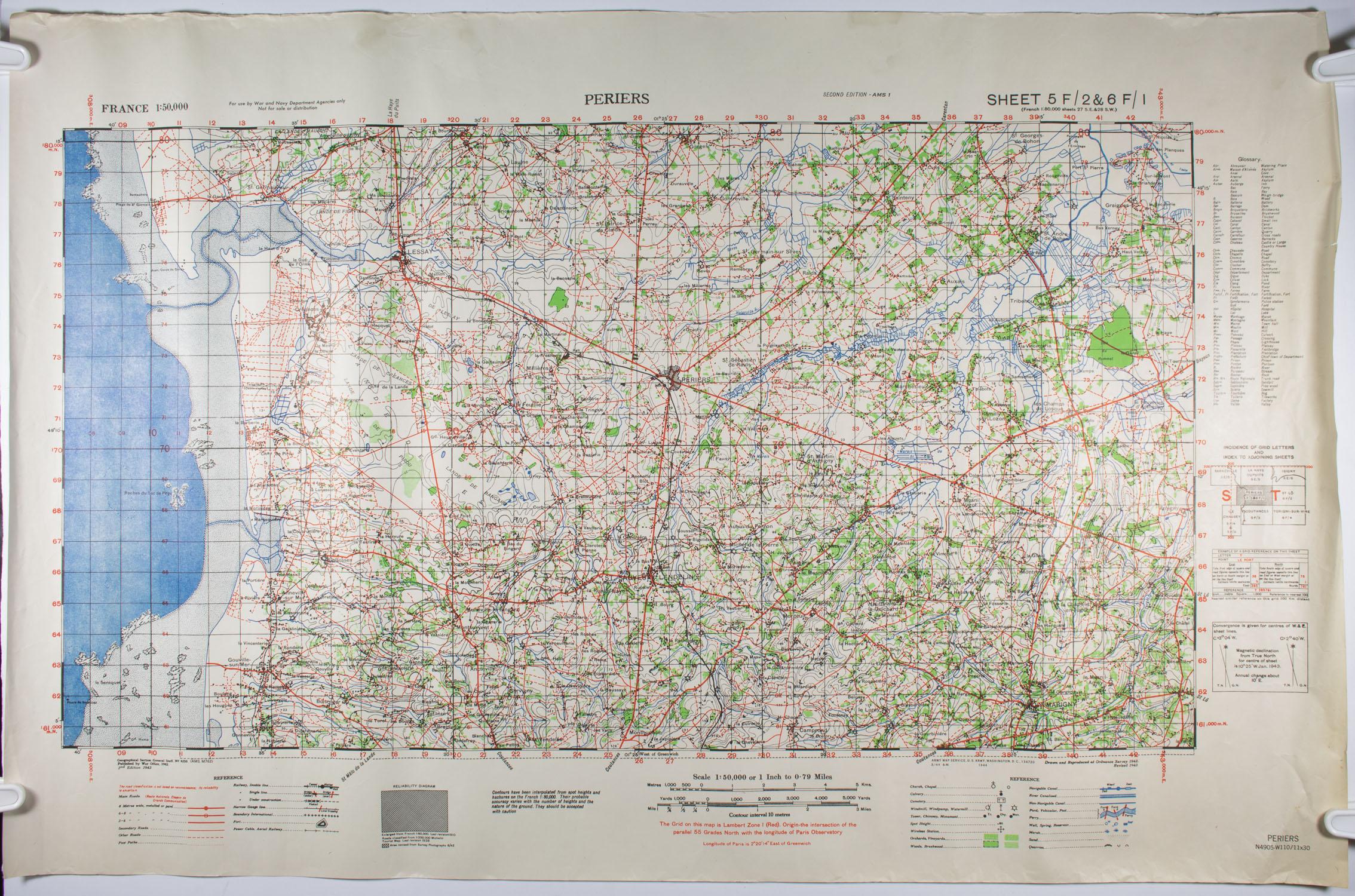 Description: FROM THE ESTATE OF GEN. CLARENCE R. HUEBNER, COMMANDER OF THE 1ST INFANTRY DIVISION IN THE FIRST WAVE AT OMAHA BEACH A fine set of four World War II-era maps owned by one of that conflict's most notable infantry commanders, each 1:50,000-scale depiction of a locale in the vicinity of the Cotentin Peninsula in Normandy, France. The charts presented here include: Periers, Sheet 5F/2&6F/I, second edition, 1943, printed by the U.S. Army Map Service in March of 1944; Coutances, Sheet 6F/3, second edition, 1943; Torigini-sur-Vire, Sheet 6F/4, second edition, 1943; and Domfront, Sheet 7G/I, first edition, 1943. All are marked at bottom as being produced by the Ordance Survey of the U.S. War Office, and all but Domfront bearing the disclaimer that the chart is intended for use solely by the War and Navy Departments. All show minor folds and slight chips to the edges, else very good. Four pieces. CLARENCE R. HUEBNER (1888-1972) was the American general who took command of the 1st Infantry Division, popularly known as the 'Big Red One', in early August of 1943. He commanded the division during the D-Day landings on June 6, 1944, where it was the first force to face the Germans on Omaha Beach, and he joined his men on the beach the same day. The division was instrumental in the breakthrough following the battle for St. Lo and in foiling the German counteroffensive at Mortain. After the Allied breakout in Normandy, the division advanced rapidly, arriving at the German border in early October of 1944, where it was committed to battle at Aachen, which it captured after two weeks of heavy fighting. After experiencing heavy fighting once again in the Huertgen Forest, the division briefly rested but soon returned to counter the German offensive at the Battle of the Bulge in December, 1944. In January, 1945, Huebner was named commander of the V Corps, which he commanded in its advance to the Elbe river, where elements of the corps made the first contact with the Soviet Red Army. By war's end, the division had advanced into Czechoslovakia. Following the German surrender, Huebner served as the Chief of Staff for all American forces in Europe, and in 1949 was named the final military governor of the American occupation zone in Germany. These maps originate from General Huebner's estate and is accompanied by a letter of provenance signed by a direct linear descendant.