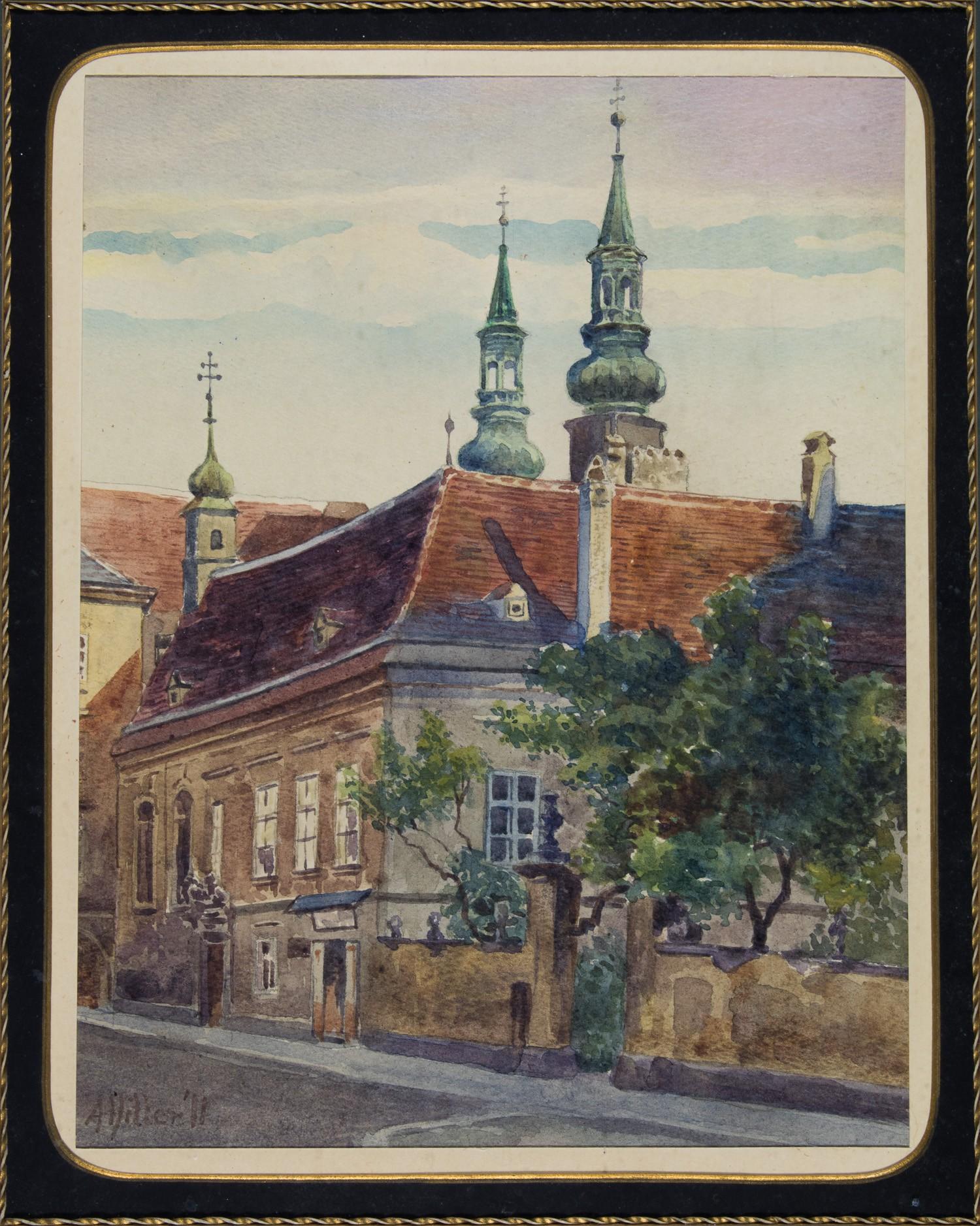 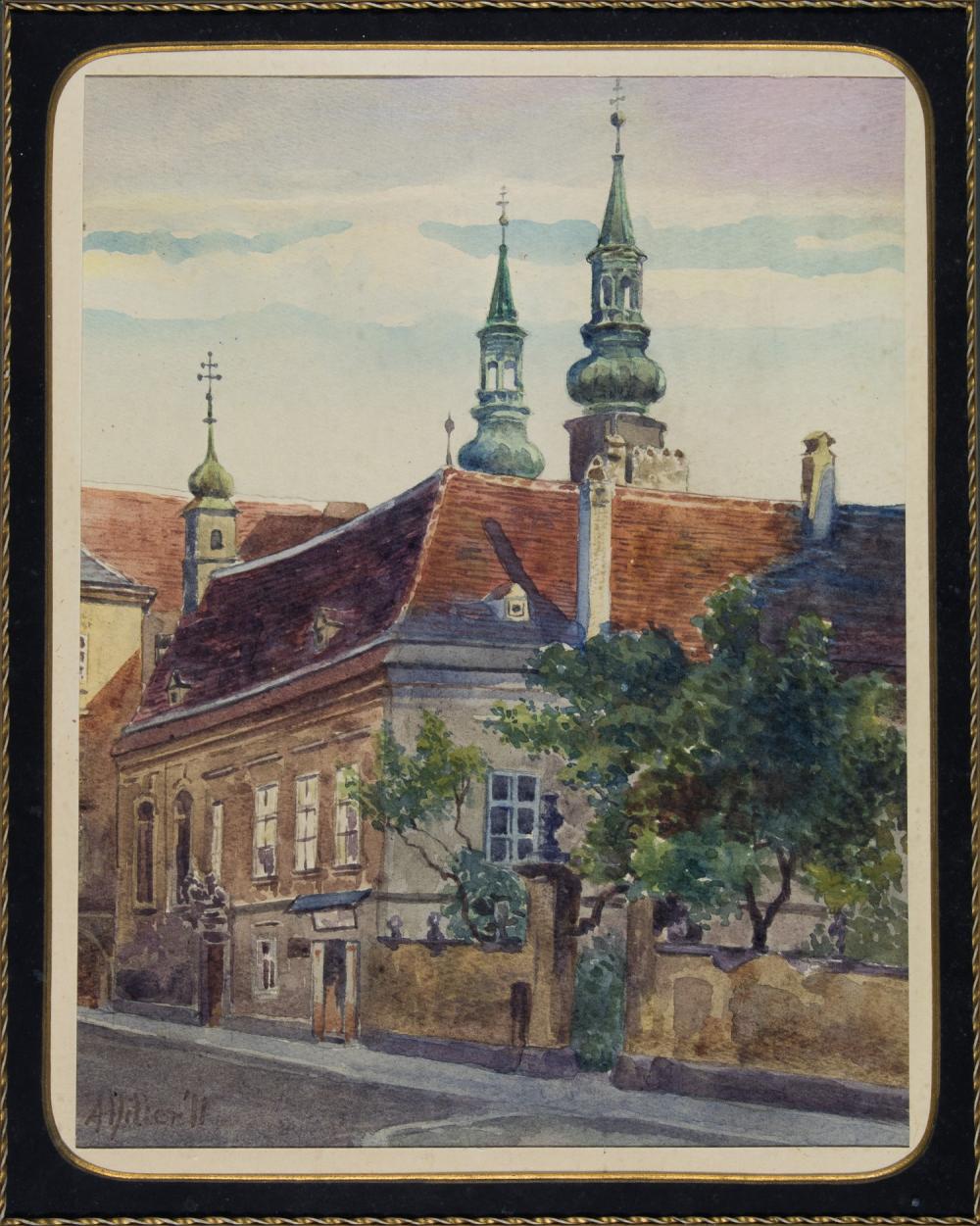 Description: ADOLF HITLER ORIGINAL WATERCOLOR PAINTING
Original watercolor painting on heavy rag paper, 6.75 x 8.5 in., executed by future dictator ADOLF HITLER (1889-1945) and lifted from the Main Archive of the NSDAP, with the best provenance obtainable. The work depicts the 'Heiligenkreuzerhof', a large former monastery complex in central Vienna, later converted to apartments. It depicts a portion of the Mansard-roofed structure from a viewpoint in its central courtyard, with the spires of a 17th century Jesuit church visible in the background. This view is an exact copy of that presented on a 1910-dated postcard, also present here, eliminating only three human figures in the foreground. Hitler was known to produce works directly from postcards, due to his discomfort with working from nature. This method contributed to his well-known highly detailed, yet flat and lifeless style. The drawbacks of such methods are on full display here, with the proportions and perspective appearing awkward and unnatural. The underlying sketch in this example is executed in pencil, adding color washes of earth tones and muddied blues and greens, without the ink detail lines sometimes seen in Hitler's work. The sky is given an unnatural purplish hue, also visible in the shadows. These many deficiencies contributed heavily to Hitler's rejection from the Vienna Academy of Fine Arts. The artist's signature 'A Hitler '11' is executed faintly at bottom left, and is of a style seen in other Hitler works of this early period. The painting is triple-matted in white, dark blue, and gray-blue, and set into a period green-lacquered frame. The frame is backed with period German newspaper and is stamped 'Haupt-Archiv der N.S.D.A.P.' ('Main Archive of the NSDAP'). It further bears the accession number 'Nr. 3a 38' in pencil. Provenance is provided by a period T.L.S. in German, 2pp. 4to., Kronenburg, Sept. 15, 1938, from painter, art professor and Privy Councilor of the Prussian State WERNER PEINER (1897-1984), to ERICH UTRECHT (1879-1960) clerk to Rudolf Hess and head archivist of the 'Hauptarchiv der NSDAP', where he oversaw the collection and storage of all material related to the history of the Party. Peiner writes, in part: '....As already discussed by telephone, I hereby send you the Fuhrer's work 'Heiligenkreuzerhof' for further evaluation and archiving. My colleague Dr. Weigant in Trier has given me this work for inspection. According to his statements this piece is family-owned, and was bought during a vacation in the Burgenland [the most south-eastern province of Austria]. Of special interest for your colleague [NSDAP archivist and expert on Hitler's art Dr. August] Priesack should be that fact that the original postcard which served as the template [for this painting] is also present. As is well known, the Fuhrer often used postcards as [models]. As I already mentioned, in my opinion the origin and originality are above all doubt, as well as the artistic execution...' Peiner signs at the conclusion in black ink. At this time, Peiner served as the head of the 'Hermann-Goring-Meisterschule fur Malerei' ('Hermann Goring Master School of Painting') at Kronenburg, an art academy dedicated to propagating the artistic styles and values of the NSDAP. Interestingly, works by Peiner were seized in 1937 as part of the Nazi crackdown against 'degenerate art', which included the Expressionist and Functionalist aesthetics utilized by Peiner in his earlier works. Despite this, he would become one of the Reich's most successful official painters, with Hitler himself purchasing one of his paintings for display at the Berlin Academy in 1938. In addition, the lot comes with an additional letter of research from a previous owner, stating the previous owner's father received it from 'a high-ranking party member of the Third Reich'. The letter then speculates that the painting belonged personally to Rudolf Hess and later to his son Wolf Rudinger Hess, as 'Rudolf Hess died in 1988...It seems likely that Rudinger Hess kept the picture until his father's death and then gave it away.' The writer also adds that he himself was once the videographer for the 100th birthday party of Dr. Fritz Todt, on behalf of Todt's daughter Ilsebill. At this event, the videographer was introduced by the previous owner of the painting to Rudiger Hess, and 'the two had obviously been known for some time'. Rudolf Hess's ownership of the painting would also explain the accompaniment of the original letter from the NSDAP Hauptarchiv, as both the letter and painting remained together in the archive until they both disappeared simultaneously; according to the letter, '...nobody would have questioned Hess if he'd taken it...' Besides the postcard and letters described above, the lot includes a 12mo. booklet (Konigsberg: Kanter-Verlag), 1940, reproducing 60 of Peiner's works, as well as short biographies of Peiner and Utrecht, a photo of Peiner later in life, and a short history of the 'Hermann-Goring-Meisterschule fur Malerei'. The painting is in fine condition, sold with this exceptional provenance.