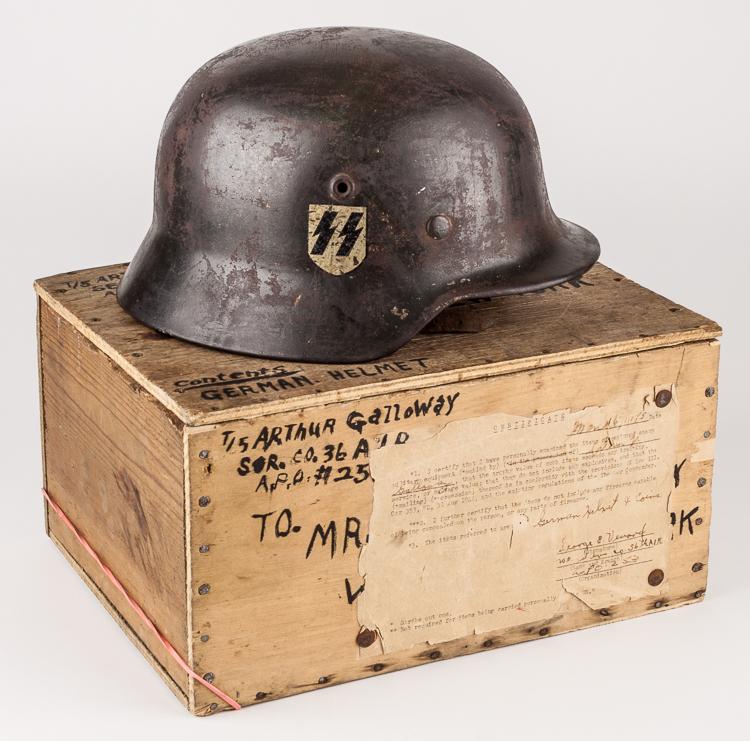 WAFFEN-SS HELMET WITH "BRING BACK" PAPER WORK
German steel single-decal M1940 combat helmet, with a very dark green painted finish overall, well-worn and oxidized in some areas, with a decal bearing the "sig" runes of the Waffen-SS, slightly scratched and dinged, on the right-hand side. The inside of the left-hand rim is heat-stamped "ET66", indicating that it was manufactured at the Eisenhuttenwerke at Thale. The rear rim is heat-stamped "228 5". The eight-fingered liner is of light brown leather, flaking slightly and size-stamped "58", with the original adjustment cord present. The dark brown leather chinstrap is cracking in several spots, but present and intact. Included with the helmet is a wood box, 13" x 7" x 10", used by an American soldier, Arthur Galloway, to ship his souvenir home to his mother at war''s end. The box is addressed on the lid: "Mrs. William Galloway, Whitehall, New York", with the return address: "T/5 Arthur Galloway 62040938, Ser. Co. 36th A[rmored] I[nfantry] R[egiment], A.P.O. #253 c/o Postmaster, New York, N.Y." with the disclaimer "Contents: German Helmet". This address appears again on the front and back of the box. On the front, the address is partially obscured by the original capture certificate for the helmet, which is secured to the wood by four tacks. This certificate, dated March 6, 1945, is signed by Galloway''s superior officer, and certifies that the value of the helmet as a trophy is not exceeded by its scrap or training value, and that no explosives or firearms are to be shipped. The certificate lists the specific items to be shipped as "German Helmet & Coins", although the latter are no longer present. The box further bears several postage stamps and an Army inspector''s stamp. Records present with the helmet indicate that Arthur Galloway enlisted in the Army in January of 1941 and was discharged in September 1945, and saw service in North Africa and in Germany. It is most likely that he captured this helmet from a surrendering soldier in Germany, shortly before war''s end, as indicated by the date on the shipping certificate. A superlative relic in as-captured condition.