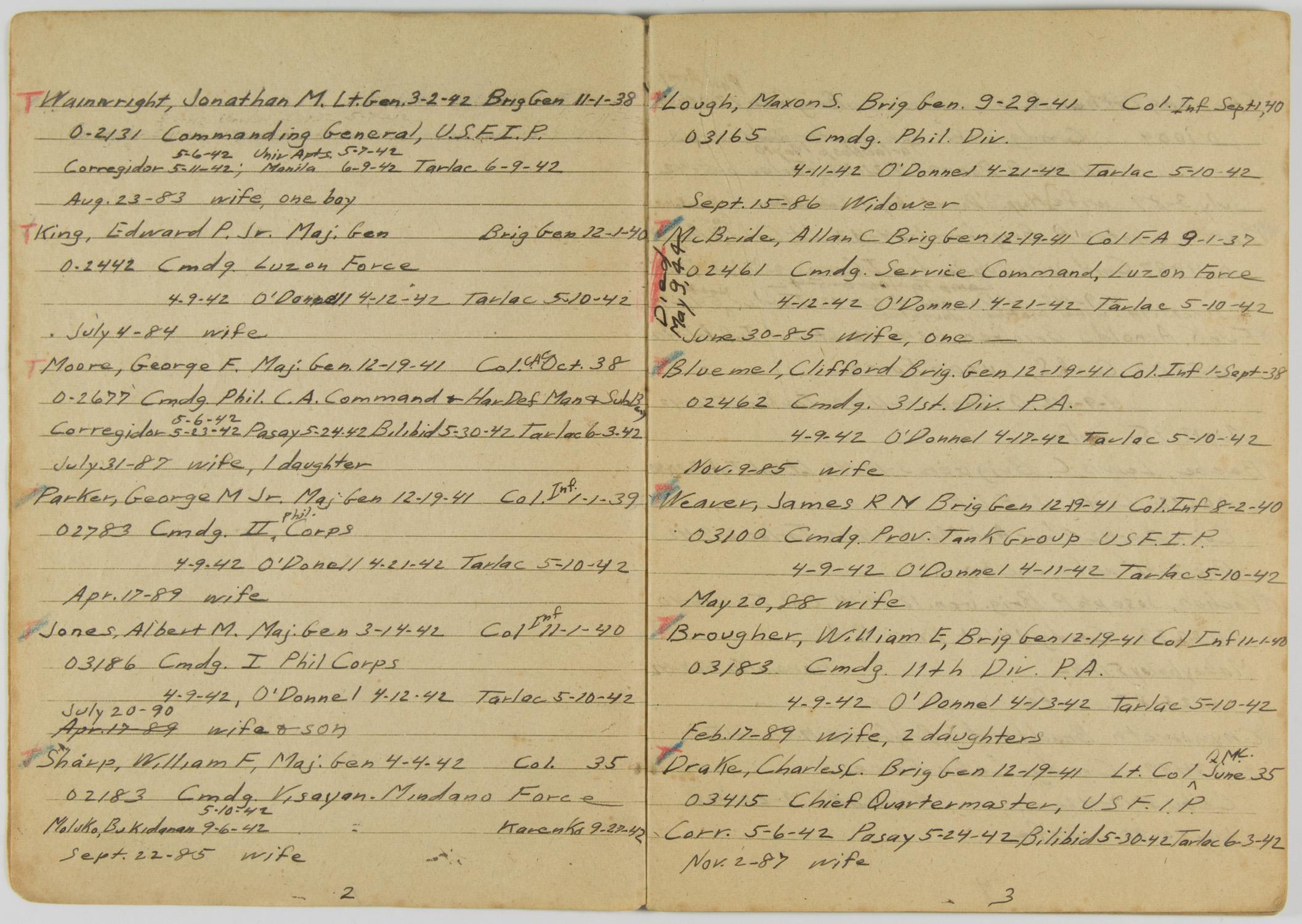 LOG OF OFFICERS IMPRISONED BY JAPANESE AT FALL OF THE PHILIPPINES

Description: LOG OF OFFICERS IMPRISONED BY JAPANESE AT FALL OF THE PHILIPPINES
An incredible, historically vital log of American and other Allied officers who surrendered or were captured by the Japanese following the fall of the Philippines and surrender of forces on Bataan, as meticulously maintained by an American officer who further maintained lists of those who were imprisoned with him at various camps until his liberation at Mukden five years later. This log, which was undoubtedly kept hidden from his captors, was commenced by Col. OCTAVE DECARRE (1883-1967), shortly after his surrender. DeCarre, a civil engineer in civilian life, had served with the AEF in World War I and served a tour in Hawaii. He was then placed in command of the 92nd Coast Artillery Regiment ('Philippine Scouts') in the harbor defenses of Manila and Subic Bays until his surrender on May 6, 1942. The log, signed on its cover by DeCarre, was compiled within 6 x 8.25 in. Japanese-made 'Note-book' and includes 54 pages of carefully written, very clear notes. The first entry was most likely made shortly after the surrender at the Tarlac POW camp, 65 miles north of Manila, where the Japanese consolidated senior officers and their aides and orderlies who had surrendered at various locations in the Philippines. Over a span of 33 pages, DeCarre lists the names of approximately 200 American, British, Australian, and Dutch officers and aides, along with 11 civilian detainees. Each entry includes the individual's name, rank and posting. Additionally, the Americans on the list routinely include the man's birth date, date of capture, camps at which they were previously held, marital status, and number of children. DeCarre made certain that his first entry was his commander, Gen. Jonathan Wainwright. Other captives include major generals Edward P. King, George M. Parker, Albert M. Jones, William F. Sharp, 13 brigadier generals, lower-ranked officers from every department, and an ensign who survived the sinking of the USS HOUSTON. British officers include Lt. Gen. Arthur Percival, Lt. Gen. Sir. Lewis Heath, Vice Air Marshal P. C. Maltby, five major generals, and several dozen others. Top-ranking Dutch prisoners are listed, as well as the civilian governors of Singapore, Hong Kong, Sumatra, upper-level administrators, etc. On Jan. 1, 1943 DeCarre prepared a detailed numerical chart of officers held at Karenko, Formosa, where he and 180 prisoners had been transferred the previous August aboard the 'hell ship' Nagara Maru. He lists each rank and the number of men from each country being held thereat. He prepares a similar updated list on Mar. 17, 1943, as well as tables of prisoners transferred to Heito, a POW slave labor camp on the same island. On April 3 and June 27, 1943 DeCarre created additional tables of prisoners held, and listed American enlisted men held at the camp. On Aug. 9 he lists the 'First Hong Kong Contingent' of British prisoners to arrive at Karenko. Shipped to the Japanese POW camp Shirakawa, DeCarre compiled another table similar to the others on July 1, 1944, showing a total of 513 men being held. Work at the camp was again brutal, as the men were forced to tend livestock and work the fields while living on starvation diets. In the early winter of 1944, DeCarre and a large group of senior officers were again transferred, this time to Cheng Chia Tun, Manchuria where DeCarre again tabulates those being held, a total of 354. Finally, on July 27, 1945 - only nine days before the first atomic bomb would be dropped on Hiroshima - the diligent DeCarre makes a final table in Mukden showing a total of 1,708 men being held (which included General Wainwright) in three camps. Throughout his journal, DeCarre names those who have been transferred and their destination, as well as those who have died in Japanese hands. On the very last page of this journal, the colonel lists 15 men from the Coast Artillery who had been captured with him, and in a shaky hand indicates that four had died at the hands of their captors. This is a critically important and historic record. Very good condition.