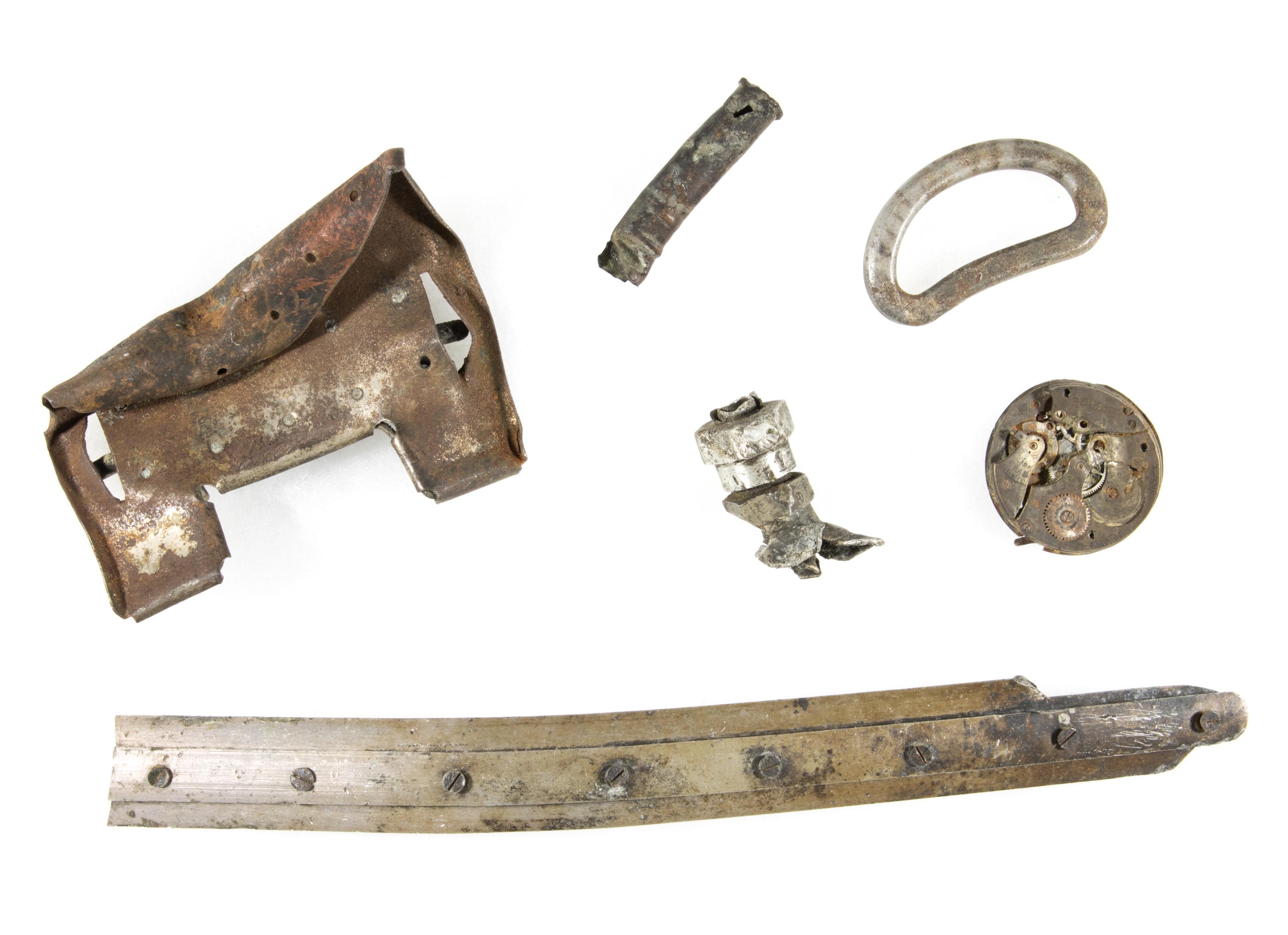 KAMIKAZE RELICS AND SAILOR'S ARCHIVE FROM THE U.S.S. LAMSON 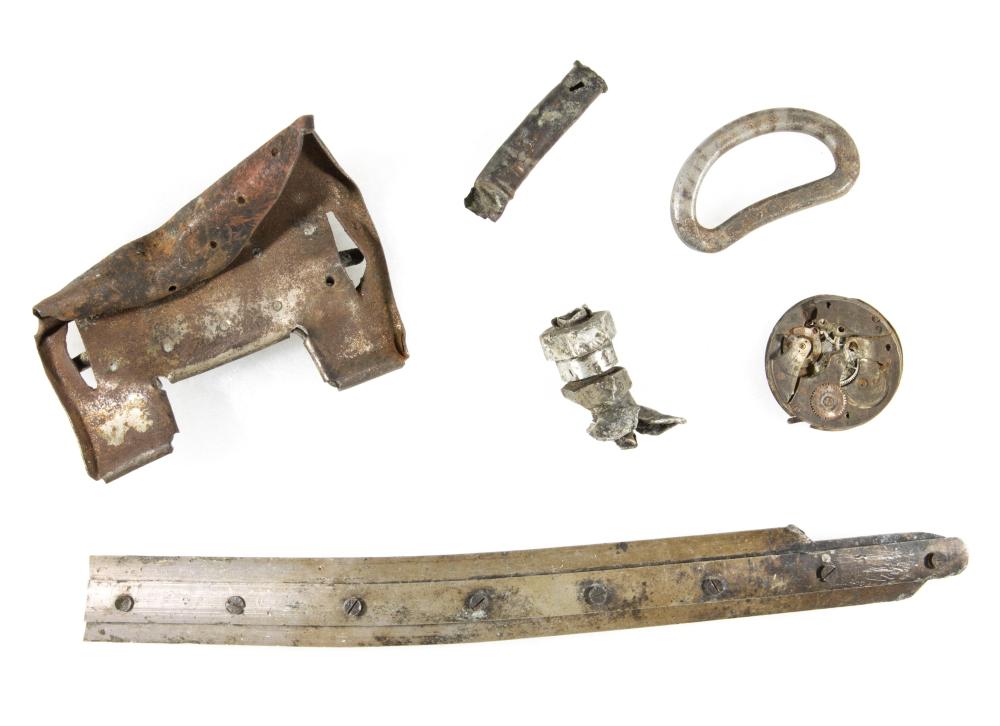 KAMIKAZE RELICS AND SAILOR'S ARCHIVE FROM THE U.S.S. LAMSON

KAMIKAZE RELICS AND SAILOR'S ARCHIVE FROM THE U.S.S. LAMSON
On December 7, 1944, during the Battle of Ormoc Bay off the coast of Leyte Island, Japanese kamikaze aircraft hit and heavily damaged the destroyer USS MAHAN (DD-364) and the high-speed transport USS WARD (APD-16), both of which were intentionally sunk by US ships when fires could not be brought under control. The Mahan-class destroyer USS LAMSON (DD-367) replaced MAHAN as fighter director ship and made five intercepts of Japanese aircraft. At about 1400, LAMSON gunners shot down a 'Dinah' recon plane that had released a bomb, which had exploded about 50 feet astern and covered the fantail with shrapnel. Three additional low-flying planes immediately followed, all Zeroes, and two were shot down by the USS EDWARDS. The third struck the LAMSON's stack and pivoted into the superstructure, engulfing the entire area in shrapnel and burning aviation fuel. The ship careened wildly as men jumped for their lives from the burning superstructure and deck. After scuttling was considered, officers chose to repair the ship and return her to service. On January 3rd, 1945 Seaman 2nd Class JOHN R. GROEZINGER of Utica, New York was finally permitted to write his parents about the disaster. His graphic letter, 12pp. 8vo. with envelope, sent to his father, reads in small part: '...regarding our recent mishap...I'm too important a man on board ship for them to transfer...I'm one of a few of the original bridge gang left...I'm in this thing up to my neck...we were hit by a plane & 2 bombs ...At the time, I was on the bridge relieving a fellow who was exhausted from lack of sleep...We were hit about 15 feet from where I was standing...I had 6 of my very best friends killed right around me. Altogether we only lost 25 men - with 51 severely injured. Considering the damage done that wasn't bad at all...Then there was a little matter of getting off the blazing bridge or rather whatever was left of it & going for a swim...I don't think I'll ever forget it...Don't say a word...to anyone, please...I don't think it would do Mom any good to know...My prized possession is the little yellow bastard's watch! I have parts of the plane which I'll bring home also...don't mention anything about the plane, either. Enough of that shit, hun?...' Other letters relative to his role in the attack mention: '...I am the powder man on one of the 5 inch guns... I'm now in the ship's [fire] control department...I was moved up to the bridge yesterday. I guess I'll be concentrating on navigation from now on, instead of brooms, mops and paint...' In all there are about 150 letters from Groezinger, all written while in the Navy but about two-thirds of the grouping from during his time in training, of after the Japanese surrender while on occupation duty or in San Diego. As is the case with the earlier letters, these are all written to his parents in Utica, these being generally very routine, also mentioning painting 'kill' emblems on the vessel superstructure; vessel operations, wild celebrations for V-J Day, friends dying in combat, transiting the coast of Kyushu, and calling at ports there including Nagasaki. Groezinger remained true to his word. Included in this lot is the charred, cracked and bent mechanism of the kamikaze pilot's 'Seikosha' pocket watch', along with a 2.25 x 2 in. literally 'baked' section of the pilot's shoe, and a 'D' ring from his harness. Additional relics from the wreckage of the Zero include a burned machine gun casing, a 11 in section of railing from the windscreen, a fuel line fitting, and a 4.25 x 4 in. section of aluminum with a spring-loaded latch which likely served to secure the aircraft's window. Other items belonging to Groezinger and present in this lot include: two ca. late 1945 battle histories of the LAMSON, printed onboard and mentioning the kamikaze attack; two seamen's' caps, one with insignia; 'Donald Duck' naval cap, dress woolen shirt and pants; Navy blouse with insignia; three ditty bags (one named), seven 11 x 14 in. photos and three 8 x 10 in. photos (only one contemporary) showing LAMSON before the attack, after the attack and in flames, and crewmen being rescued from the water; along with approx. 100 original photographs, with about 35 showing Groezinger in uniform at the start of his military service; enlistment and discharge papers; permission to attach two bronze stars to his service ribbon for service in New Guinea operations and the Bismarck Archipelago; shipboard religious service printings and menus; publications on navigation, Japanese stamps and currency, service-related documents, and a host of other related ephemera. An especially rare and historical grouping, especially with the addition of the suicide pilot's effects.