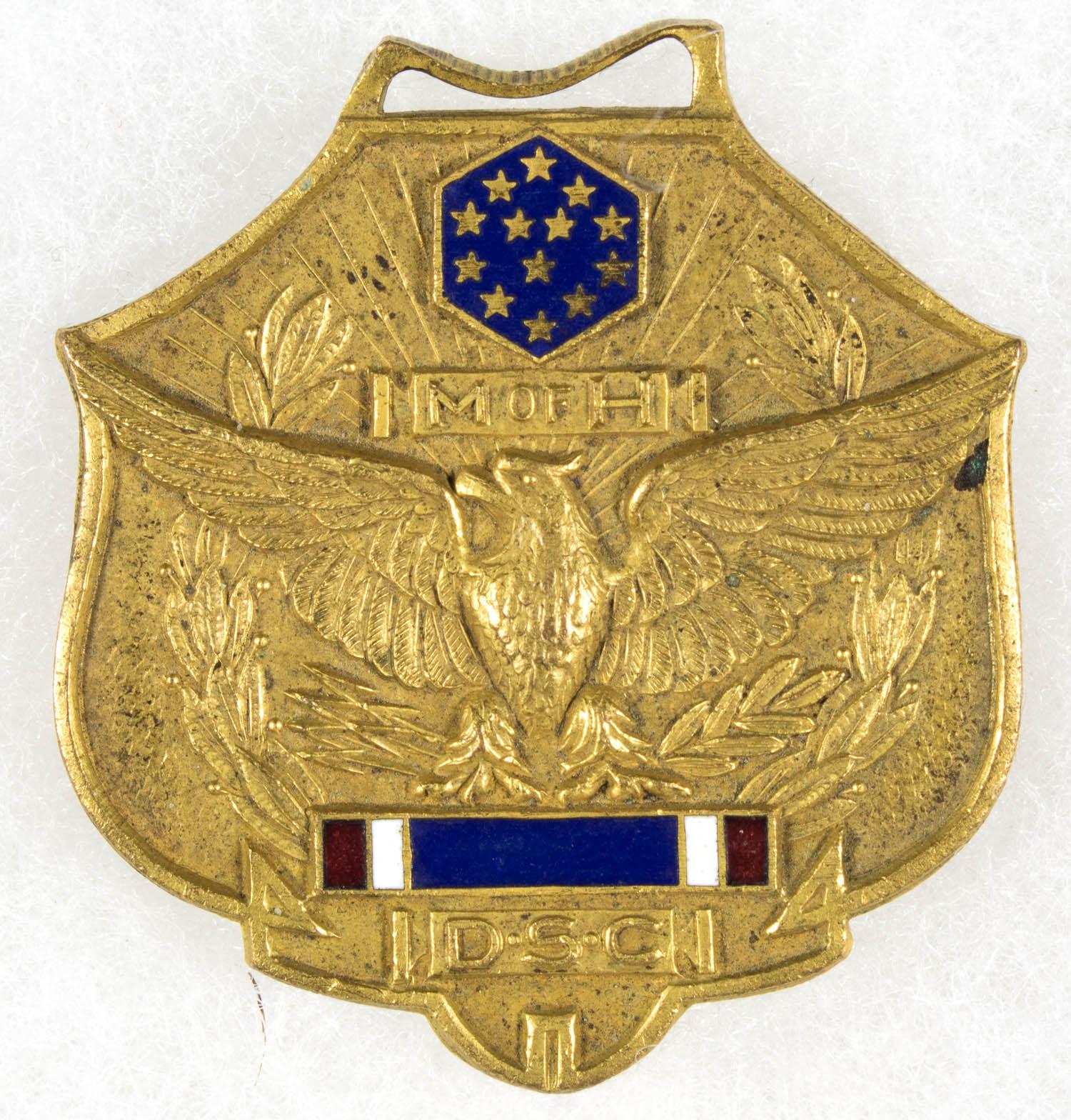 Description:
An incredibly unusual find, a clearly vintage 'Medal of Honor'-reminiscent medal once belonging to OSCAR FITZALAN LONG (1852 - 1928), an Army Brigadier General who was issued the Medal of Honor on March 22, 1895 for his actions at the Battle of Bear Paw Mountain - the final engagement of the Nez Perce War of 1877. The medal, approx. 1.5 in. dia., bears the spread-winged eagle of the Seal of the United States beneath a blue-enameled hexagon bearing 13 stars and the abbreviation 'M of H', all surrounded by a ring of sunbeams at top and laurels to the left and right sides. Beneath the eagle lies the initials 'D.S.C.' (potentially 'Distinguished Service Cross') and an enameled depiction of a lapel pin, bearing red, white, and blue vertical stripes. The top bears a square-shaped suspension loop for the attachment of a ribbon, which is unfortunately absent. The medal is accompanied by a circular lapel button, approx. .5 in. dia., constructed as a red, blue, yellow, and white bowknot rosette. Notable dent to the suspension square at top, some tarnish to the reverse, else very good. The lapel button remains affixed, and the medal itself was once affixed, to a white index card, bearing the blue ink inscription: 'Ribbon's belonging to - General Oscar F. Long...Class of 1876...West Point...The Old Medal of Honor (Bronze)...For the New Medal of Honor...'. Long received the prestigious award as a Second Lieutenant within 5th U.S. Infantry, when - as his award citation indicates - he was 'directed to order a troop of cavalry to advance, and finding both its officers killed, he voluntarily assumed command, and under a heavy fire from the Indians advanced the troop to its proper position' on September 30, 1877. While it is currently against U.S. law to sell Medal of Honors awarded by Congress, this piece does not resemble any government-issued 'Medal of Honor' we could find through our research, potentially indicating its production by a private entity in a non-official capacity. The lot is also sold with Long's enameled Red Cross lapel pin, engraved on the reverse 'Gen. O.F. Long...Calif. State Red Cross Society', affixed to a second white index card.