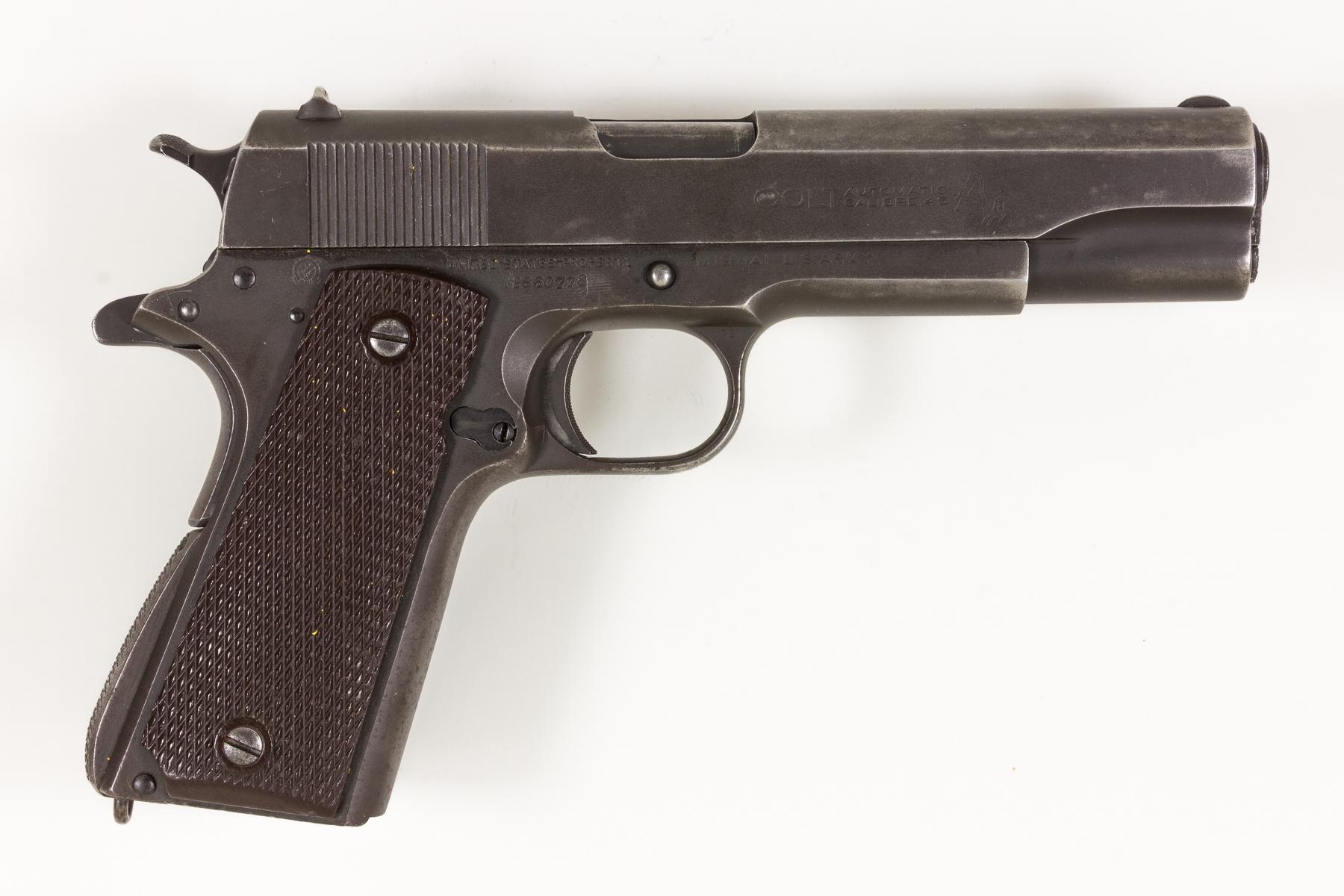 Description: FROM THE ESTATE OF GEN. CLARENCE R. HUEBNER, COMMANDER OF THE 1ST INFANTRY DIVISION IN THE FIRST WAVE AT OMAHA BEACH A fine example of a World War II-era Colt M1911A1 semi-automatic pistol, .45-caliber, 4 3/4" barrel, 8 1/4" overall, manufactured by Colt. The right-hand side of the slide is marked "Colt Automatic Calibre .45" beside a rampant colt, while the frame below is marked "United States Property" above the serial number "No 860778" and the designation "M1911A1 U.S. Army". This serial number indicates manufacture in 1943. The "crossed cannons" mark of the U.S. Army Ordnance Corps appears just behind the top of the grip. The left-hand side of the slide is marked with Colt's patent information rollmark, with the inspector's initials "G.H.D." appearing on the slide below the slide hold-open catch. Various proof marks appear on both sides of the trigger guard, and just behind the magazine release. The pistol retains almost all of its original parkerized finish, wish minor holster wear visible on the slide and frame near the muzzle, and on the front of the trigger guard. The grips are dark brown bakelite, and show no chips or other damage. The bore is in fine condition, showing strong rifling with a slight buildup of grime in the grooves, while the crown remains well defined. The magazine is unfortunately missing. The pistol shows some handling marks and signs of honest wear overall, and cocks and fires properly. NRA grade excellent. CLARENCE R. HUEBNER (1888-1972) American general who commanded the 1st Infantry Division, popularly known as the "Big Red One", in early August of 1943. He commanded the division during the D-Day landings on June 6, 1944, where it was the first force to face the Germans on Omaha Beach, and he joined his men on the beach the same day. The division was instrumental in the breakthrough following the battle for St. Lo and in foiling the German counteroffensive at Mortain. After the Allied breakout in Normandy, the division advanced rapidly, arriving at the German border in early October of 1944, where it was committed to battle at Aachen, which it captured after two weeks of heavy fighting. After experiencing heavy fighting once again in the Huertgen Forest, the division briefly rested but soon returned to counter the German offensive at the Battle of the Bulge in December, 1944. In January, 1945, Huebner was named commander of the V Corps, which he commanded in its advance to the Elbe river, where elements of the corps made the first contact with the Soviet Red Army. By war's end, the division had advanced into Czechoslovakia. Following the German surrender, Huebner served as the Chief of Staff for all American forces in Europe, and in 1949 was named the final military governor of the American occupation zone in Germany. This pistol originates directly from General Huebner's estate and is accompanied by a letter of provenance signed by a direct linear descendant. Overall, a desirable example of the most iconic sidearm of World War II, owned by one of the U.S. Army's most notable generals. All firearms purchases must be completed through a Federal Firearms License holder, and the purchaser is responsible for all associated fees. No shipping outside of the United States.