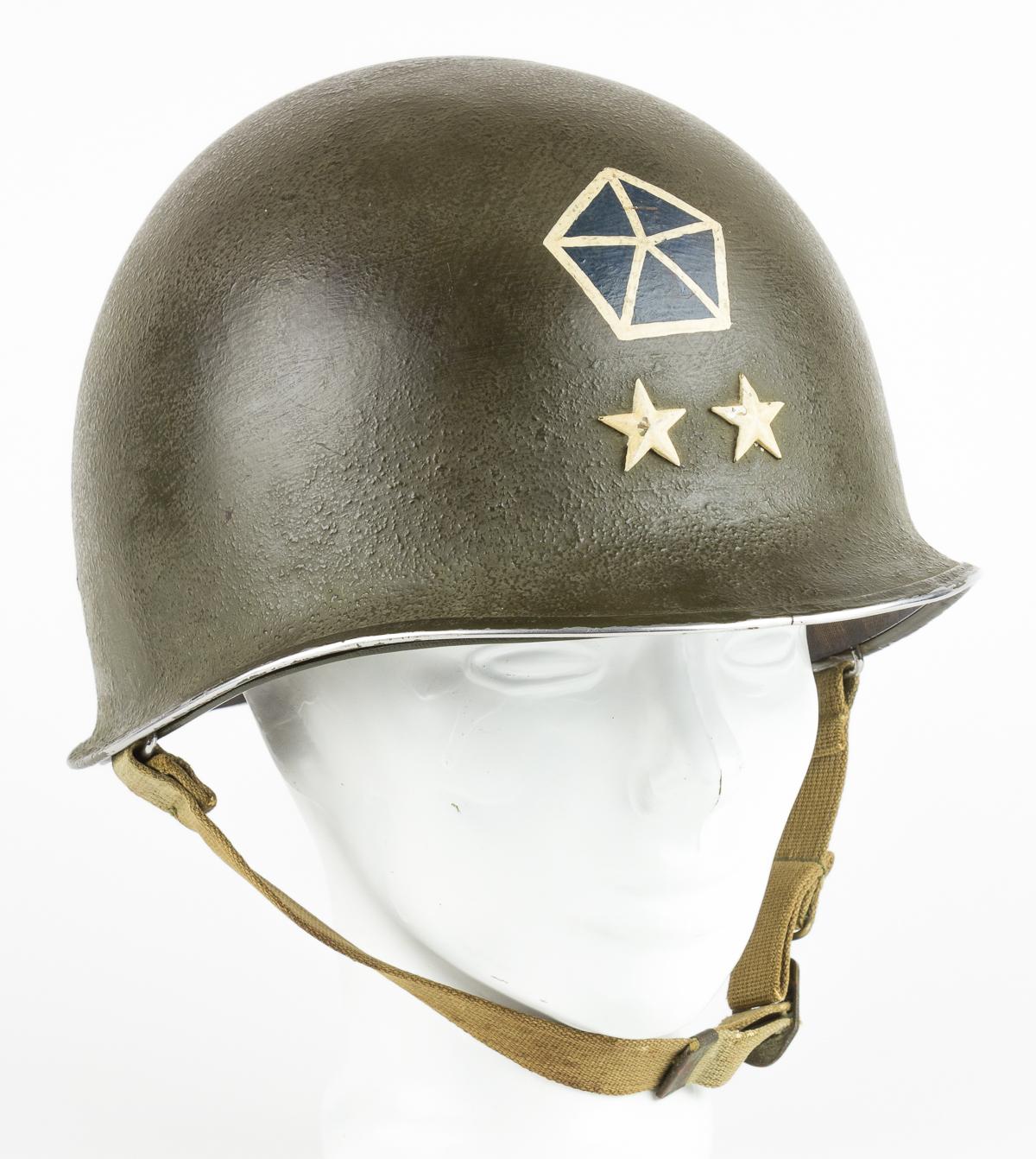 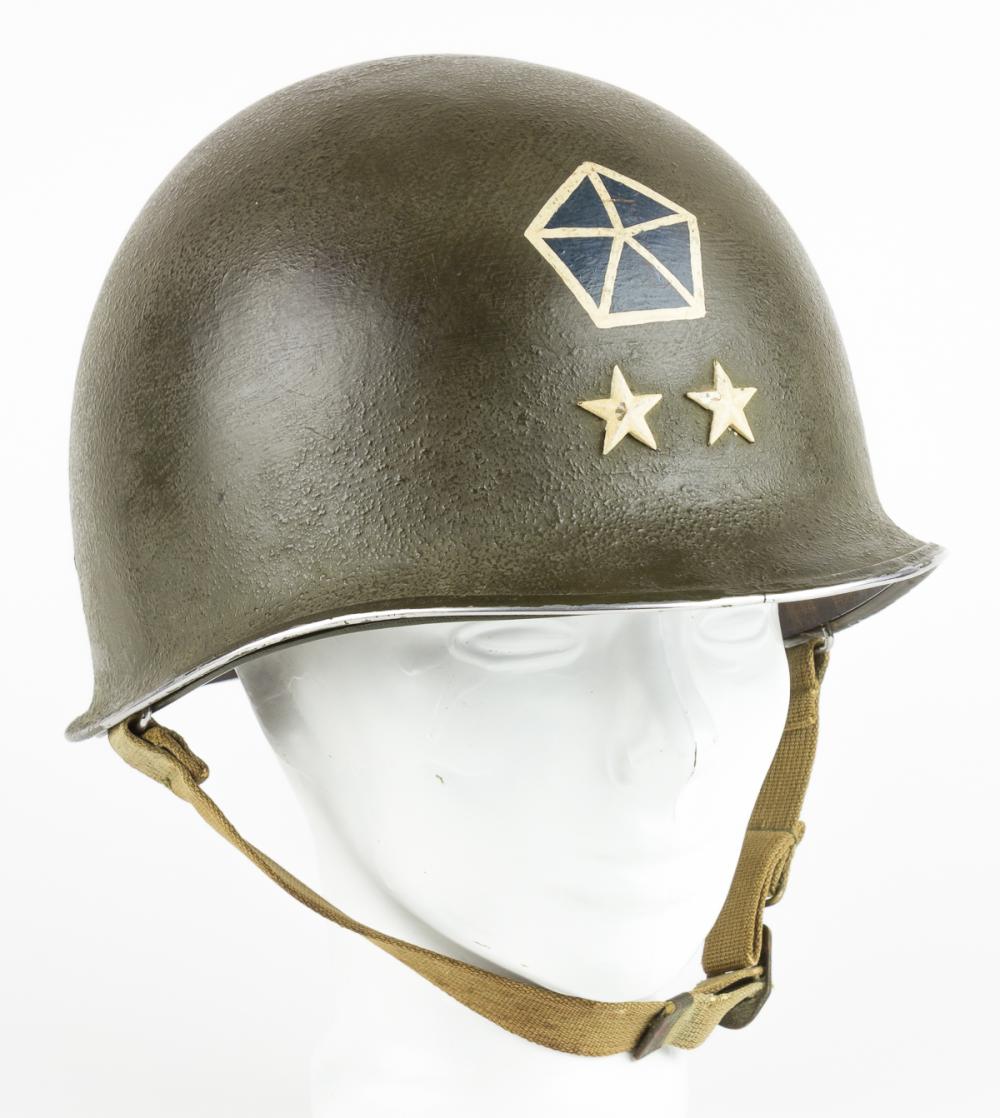 FROM THE ESTATE OF GEN. CLARENCE R. HUEBNER, COMMANDER OF THE 1ST INFANTRY DIVISION IN THE FIRST WAVE AT OMAHA BEACH An excellent relic of one of the most notable infantry commanders of World War II, an early U.S. M1 combat helmet owned and worn by Major General Clarence R. Huebner throughout World War II, and undoubtedly during his landing on Omaha Beach on D-Day, June 6, 1944. The steel helmet bears a seam of the steel rim at front, and with fixed chin strap bales securing an original taupe webbing strap, in turn fitted with a first-style brass clasp, all indicate manufacture prior to October of 1943. The interior of the shell is heat-stamped "169B" at front. Most interestingly, the exterior bears several painted and applied pieces of insignia relevant to Huebner's career. At front center appears the hand-painted insignia of the U.S. Army's V Corps, of which Huebner assumed command in January of 1945. The paint of this insignia shows a few small cracks, through which traces of red paint can be seen, and the bottom point of a diamond, painted over in olive drab, can be discerned below. This indicates that the V Corps insignia has been painted over the insignia of the First Infantry Division, nicknamed the "Big Red One" for its insignia depicting a large numeral "1" within a black-bordered inverted diamond. Huebner was given command of the First Infantry Division in August of 1944, and he retained that command until his appointment as commander of V Corps. Below the V Corps insignia are welded two white painted metal stars, with the paint flaking slightly on both to expose the bright finish beneath. The rear of the shell bears a vertical "follow me" stripe in white paint, applied circa Operation Overlord to identify the wearer as an officer. The remnants of an earlier, larger stripe appear beneath this white stripe and a layer of olive drab paint. The helmet has clearly been refinished during wartime, removing some of the original heavily-corked texture and adding a darker shade of olive-drab paint than usually seen on these early helmets, most likely accomplished at the same time the V Corps insignia was added upon Huebner's promotion. The interior of the shell bears a typed label bearing the owner's name and rank "Maj. Gen. C.R. Huebner", beneath a strip of cello tape. This shell is fitted with a liner bearing the maker's mark of Firestone inside the dome, above the numeral "48". The exterior of the liner again bears the hand-painted insignia of V Corps above two general's stars at front, with a vertical "follow-me" stripe in white paint on the back. We believe that this liner was issued to Huebner after the issue of the helmet, sometime after late, 1942. The liner's chin strap is missing, and both liner and shell show minor wear and soiling commensurate with wartime use, with the shell showing two shallow, 1 1/2" cracks at the rear left, not fully penetrating the steel, else very good. CLARENCE R. HUEBNER (1888-1972) was the American general who commanded the 1st Infantry Division, popularly known as the "Big Red One", in early August of 1943. He commanded the division during the D-Day landings on June 6, 1944, where it was the first force to face the Germans on Omaha Beach, and he joined his men on the beach the same day. The division was instrumental in the breakthrough following the battle for St. Lo and in foiling the German counteroffensive at Mortain. After the Allied breakout in Normandy, the division advanced rapidly, arriving at the German border in early October of 1944, where it was committed to battle at Aachen, which it captured after two weeks of heavy fighting. After experiencing heavy fighting once again in the Huertgen Forest, the division briefly rested but soon returned to counter the German offensive at the Battle of the Bulge in December, 1944. In January, 1945, Huebner was named commander of the V Corps, which he commanded in its advance to the Elbe river, where elements of the corps made the first contact with the Soviet Red Army. By war's end, the division had advanced into Czechoslovakia. Following the German surrender, Huebner served as the Chief of Staff for all American forces in Europe, and in 1949 was named the final military governor of the American occupation zone in Germany. This helmet originates directly from General Huebner's estate and is accompanied by a letter of provenance signed by a direct linear descendant. It is also accompanied by seven period photographs, three showing Huebner wearing this helmet, two showing it with 1st Infantry Division insignia and two with V Corps insignia, a fifth view showing him wearing the liner alone, and two formal headshots showing the helmet in its present configuration.