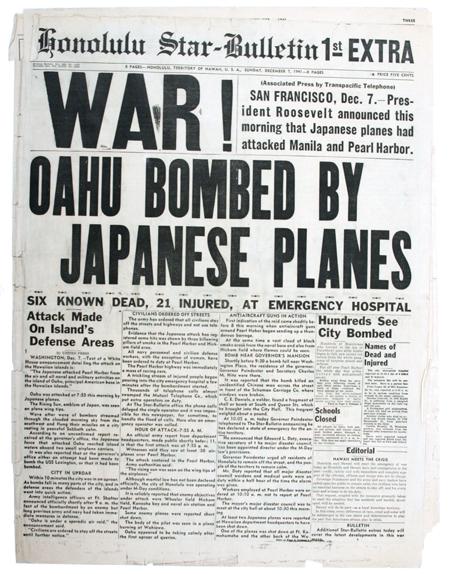 FIRST HONOLULU PEARL HARBOR ATTACK NEWSPAPER
Excessively rare newspaper, the Honolulu Star-Bulletin 1st Extra Edition issued on the morning of Dec. 7, 1941, 8pp. Folio. The Headline screams: "WAR! OAHU BOMBED BY JAPANESE PLANES SIX KNOWN DEAD, 21 INJURED, AT EMERGENCY HOSPITAL Attack Made On Island's Defense Areas". The paper also has a front-page AP story breaking the news that President Roosevelt had announced that Japanese planes had attacked Pearl Harbor and Manila. The front page story offers sketchy news of the attack on Pearl, orders that civilians stay off the streets, sets forth some of the names of the dead, etc. Further fragmentary stories are reported on page two. The paper is only lightly toned, but bears marginal tears at top, bottom and at fold on left. Page six bears two tape repairs at the edge of the page, else very good. Although this paper continues to be reprinted to this day, this is an original copy, bearing the telltale wedge-shaped ink mark in the word "WAR" in the headline. Sold with the Honolulu Star-Bulletin tenth anniversary edition of the attack, Dec. 7, 1951. 34pp. folio, with the front page literally covered with photographs of the attack on Pearl. Two small tape repairs at upper-center and a tear in masthead, else very good. Two pieces.