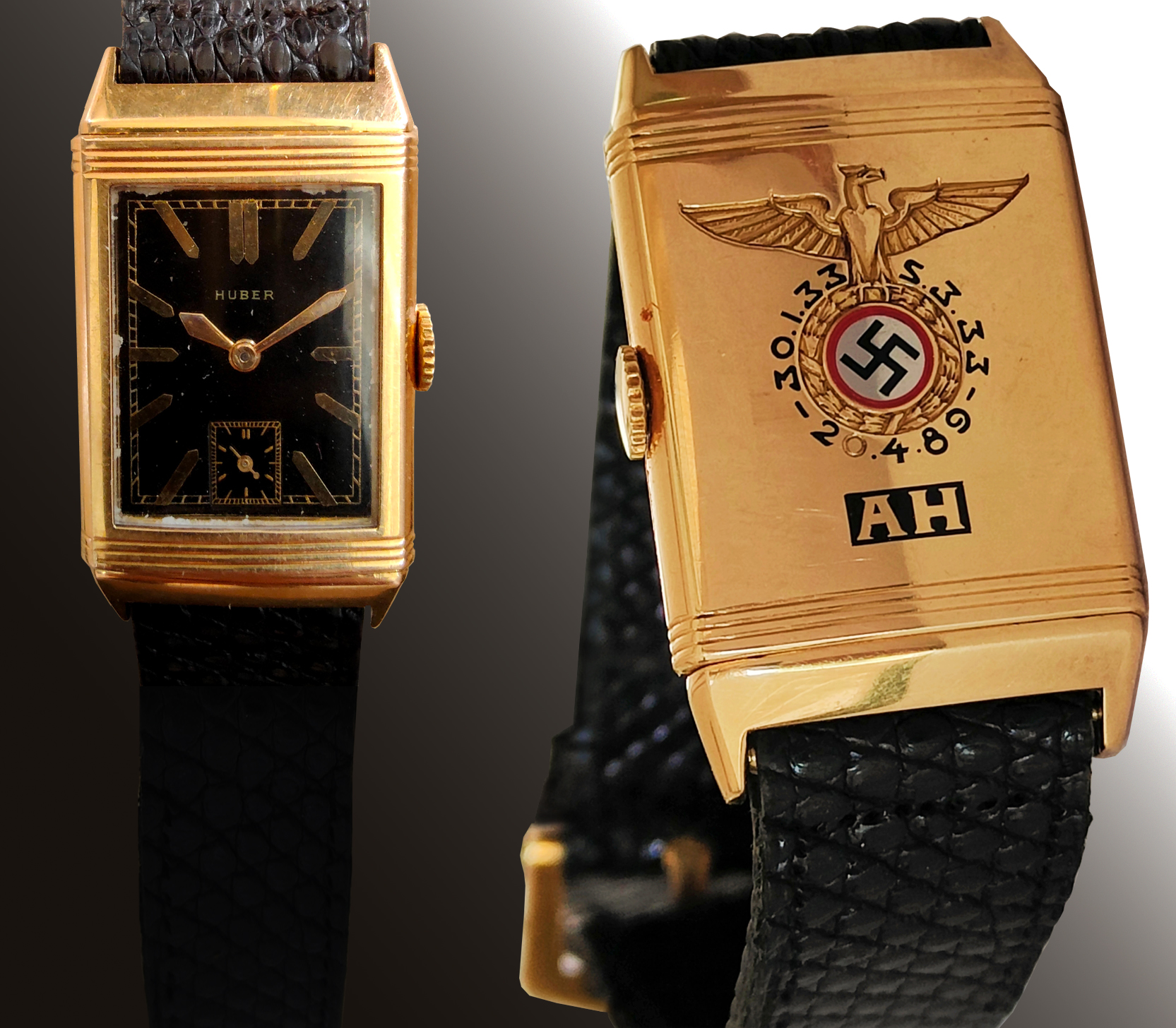 To be sold at auction by

A World War II relic of historic proportions, a gold Andreas Huber reversible wristwatch, given to Adolf Hitler himself most likely on April 20, 1933, when on his 44th birthday the dictator was named with former Chancellor Paul von Hindenburg, an honorary citizen of Bavaria – the first such honor in the history of Germany.

This incredible watch has an unwavering direct provenance from a French soldier who seized the watch as ‘spoils of war’ on Friday May 4, 1945, when his unit became the first Allied force to arrive at Hitler’s retreat at Berchtesgaden in the mountains of Bavaria. The watch and its history have been researched by some of the world’s most experienced and respected watchmakers and military historians, all of whom have concluded that it is authentic and indeed belonged to Adolf Hitler.

The watch carries a movement originally made by LeCoultre, and a case made by a subcontractor, the assembled combination being reversible, allowing the entire case to be rotated 180 degrees to protect the watch face when desired or simply to display the engraving. The body supporting the rotating case bears a Swiss “key” hallmark and a German gold hallmark. This indicates Swiss manufacture of the frame which was then exported to Germany where it was again hallmarked as “gold” as required by law. The yellow gold case is numbered “2951”, the white gold support frame is numbered “2939”. Clearly, the frame was subcontracted to another Swiss manufacturer, probably in La Chaux de Fonds. The close difference between the serial numbers seems to indicate very similar dates of manufacture. The watch is fitted with a black lizard strap with an 18K gold pin buckle. The mechanical movement is a hand-wound LeCoultre caliber no. 410-11U, numbered “12755”, manufactured by the LeCoultre establishment in December 1932. The dimensions of the watch are 23 x 38 mm. with the lugs, 23 x 33 mm. without the lugs, thickness 8 mm. The gross weight of the watch is 41.48 grams.

The front of the watch has a black dial bearing the name “HUBER” painted in black lacquer with applied indexes in gold and a “railway” design also painted all around the dial as well as around the second counter at six o’clock. Golden sword-shaped hour and minute hands are present.
The reverse of the watch links this piece directly to Adolf Hitler and the N.S.D.A.P. On the back of the yellow gold case appears a polychrome engraving, lacquered in red, white and black, presenting a swastika surmounted by an engraving of the first Nazi eagle (a “Reichsadler”) and a mobile (or inclined) swastika surrounded by a wreath of oak leaves. Appearing below are two art deco initials “A H”, lacquered black. This is a so-called negative execution in which previously hollowed-out letters have been filled with black lacquer. The swastika is surrounded by three dates: “20.4.89-30.1.33-5.3.33”. The first date (20.4.89) corresponds to Hitler’s date of birth in Braunau Am Inn, Austria. The second date (30.1.33) marks the date of his appointment as Chancellor of Germany, when Field Marshal Paul Von Hindenburg asked Hitler, leader of the NSDAP, to form a new German government. The third date (5.3.33) celebrates the date of the federal elections in Germany which gave Hitler access to full power.

This engraving is of exceptionally high quality, and its style points to its creation by an artisan subcontracted by Huber and already adept at N.S.D.A.P.-related engravings.
The watch was commissioned by the N.S.D.A.P. and assembled and engraved by the highly-respected German watch firm Andreas Huber, in Munich. The company was founded in 1856 and by 1912 Huber had become the official watch supplier to the Royal Court of Bavaria. Huber quickly became a must-have watch brand for all German officers. As such, the brand won the distinction of ‘the Royal watch with luminous dial for military campaigns’. From 1913 to 1920, on the strength of its success, the brand opened several other boutiques in Berlin, Dusseldorf and Nuremberg. The brand’s excellent reputation grew over the years as it supplied watches to public transport systems, various prestigious racing events, and to the 1936 Winter Olympics. The company even introduced a ‘talking clock’.

From the 1930s, Huber developed several brands including Nautica and Secura, and marketed several other renowned brands under its own brand name. It is a documented fact that some major manufacturers including Universal Geneve, Movado, Cyma, and IWC all agreed to deliver high-end movements to Huber and sometimes even complete watches with dials already signed ‘HUBER’. Huber assembled watches using these fine components from Swiss watchmakers – which is clearly the case in this example. Here, the movement was made by LeCoultre, the case by a Swiss contractor, and the watch frame, numbered and hallmarked, by a contractor in Switzerland. The maker of the frame is not identified but the frame was hallmarked in Switzerland by an organization of manufacturers. It was then shipped to Germany where it was again hallmarked for its gold content, as required by law. The dial may have been fabricated by Huber, or may have been “personalized” using a “blank” provided by a manufacturer.

Jaeger-LeCoultre advises it has no production records regarding this watch. No wartime documents can be obtained from Andreas Huber – their factory was bombed and subsequently burned down during World War II.

Before his appointment as chancellor in January 1933, Adolf Hitler had already received many gifts from friends, party members, German companies, and heads of state. From March 1933, having become Chancellor of Germany, gifts to Hitler poured in. The use of the first N.S.D.A.P. Reichsadler dates the watch to no later than 1934, when the “second pattern” political Reichsadler came into common use. It is doubtful that the use of this eagle for any purpose beyond official Nazi Party business would have been authorized at that time. It is therefore very likely that this watch was offered to Adolf Hitler by the hierarchy of the Nazi party or the S.A. following the 1933 elections or during the Bavarian citizenship ceremonies of April 20, 1933.

On May 4, 1945, about thirty French soldiers belonging to the Regiment de Marche du Tchad, a unit of the 2nd Armored Division commanded by the brilliant General Philippe Leclerc, stormed the Berghof, barely ahead of the American troops of the 3rd Armored Division. Among the members of this unit was Sergeant Robert Mignot who with his comrades quickly gained access to Hitler’s secondary residence and the Eagle’s Nest, both abandoned by all the occupants and guards. They also discovered the vast system of tunnels and bunkers under the house. This is probably where this watch – and other valuables – were found and taken away by the French as war souvenirs. Reports written at the time, contemporary documents and diaries, as well as statements from veterans, clearly show that these French soldiers certainly had ample time on the spot to hunt for any ‘spoils of war’ they could find, limited only by what they could carry in their backpacks. Of course, items marked with Hitler’s name were considered the best prizes, and many of these historic relics have come to market in the intervening years. Sergeant Mignot returned to France with the watch and resold it over time to his cousin, our consignor’s grandfather. It has remained in the exclusive possession of the Mignot family and that of our consignor since its discovery and has never been offered for sale before. Sergeant Robert Mignot’s service record with the 2nd Armored Division is also fully documented with records, documents, photographs and a statement from a fellow soldier, with copies available to potential bidders. A detailed letter of provenance from Mignot’s daughter is also present.

The watch is in exceptional condition. The watch has been examined by an expert intimately familiar with the movement installed and he has advised that it appears that only a cleaning to remove dried oil is required. He mentioned no other faults – as would be expected. The reptile band is frayed at one end. It can be kept or replaced, as desired.

Potential bidders are invited to request our fully-detailed, illustrated PDF document containing letters of provenance, a complete description of the watch, an appraisal and expertise by a world-renowned watch historian and auction consultant, multiple evidentiary photographs, excerpts of documents, period advertisements, a study of hallmarks, a comparative analysis of similar watches and related correspondence, Sergent Mignot’s archives, as well as those documenting his presence at the Berghof, appraisals, and more. Printed copies of this voluminous document are available at a nominal cost .

While Hitler’s correspondence, his silverware, and even his paintings and articles of his clothing and uniforms are regularly offered for sale, in only a few instances in a lifetime would one see a piece of Hitler’s jewelry come up for auction. And a spectacular wristwatch, especially given to the dictator by his most ardent supporters, has never seen the light of day. It is an absolutely unique and important historical object. This is a rare opportunity for the discriminating collector to obtain one of the most important timepieces ever created.

This historic relic is offered for sale without reserve. All bidders on this lot must be pre-registered, which will require satisfactory identification and proof of funds.

All bidders on this lot must be pre-registered, which will require satisfactory identification and proof of funds.