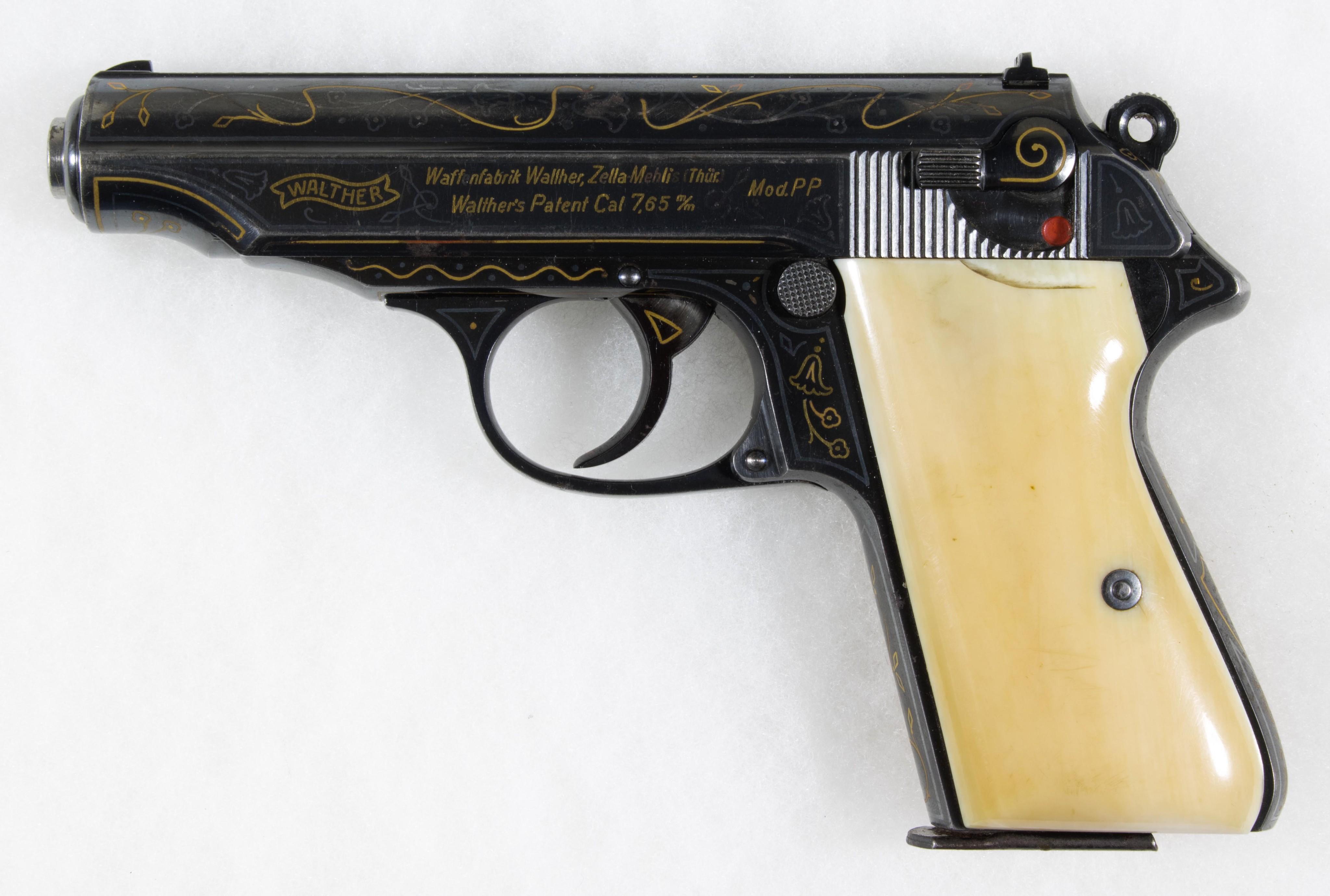 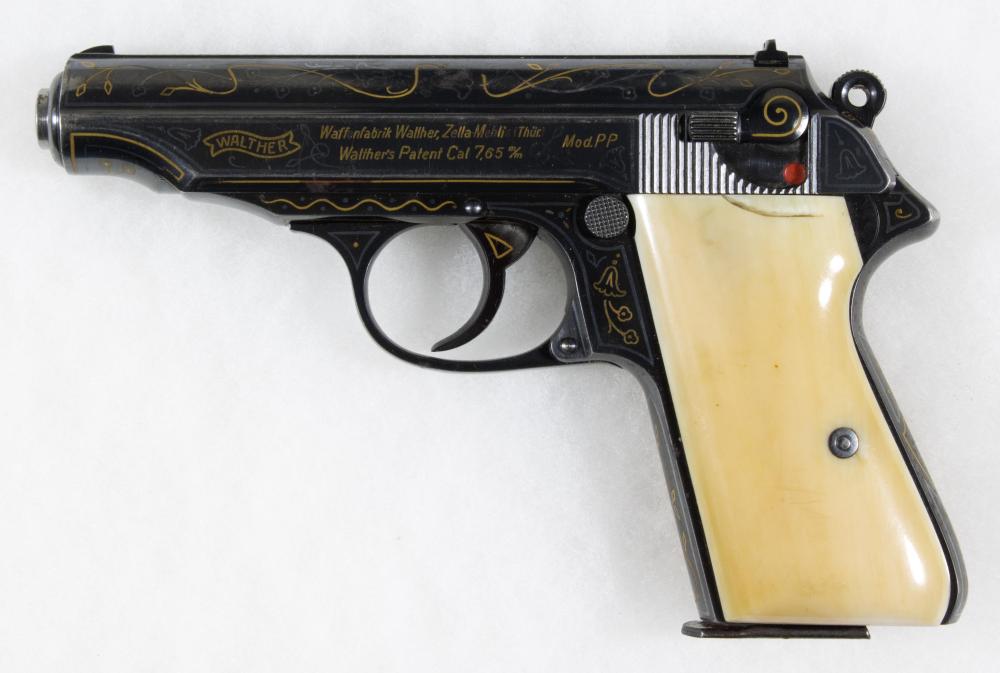 Description: WALTHER PP PISTOL BELONGING TO AUSCHWITZ COMMANDANT RUDOLF HOESS
RUDOLF HOESS (1901-1947) German SS officer convicted and executed for war crimes. Hoess was the longest-serving commandant of Auschwitz concentration and extermination camp (from 4 May 1940 to November 1943, and again from 8 May 1944 to 18 January 1945). He tested and implemented means to mass-exterminate prisoners, including the use of the pesticide Zyklon, used in gas chambers where more than a million people were killed. Hoess was hanged in 1947 following a trial before the Polish Supreme National Tribunal. During his imprisonment, at the request of the Polish authorities, he wrote his memoirs. Offered here is a chilling Hoess artifact, his Walther Model PP 7.65 mm semi-automatic pistol with a 3.25 inch barrel. The pistol, a presentation model, is adorned with a gold inlaid 'Walther' logo, as well as gold and silver inlaid patent, caliber, and model markings, otherwise identical to those appearing on all other Walther PP's. Additionally, the pistol shows many other gold and silver embellishments, as well as a floral pattern and swirls, with a blank shield on the back strap of the frame. Original two-piece cream-colored grips are fitted to the pistol, both fully intact with no chips or cracks present, pistol is also fitted with a period correct, commercial Walther banner magazine. The pistol bears 'Crown/N' proof marks, and serial number 764838. The pistol's action is smooth and crisp. Exceptional condition. The pistol was captured and brought home by Louis Bardenstein, a soldier of the 69th Signal Battalion, XX Corps, commonly known as the 'Ghost Corps', which landed on Omaha Beach on July 19, 1944 and joined Patton's Third Army. Bardenstein claimed through his daughter, as stated in the included copy of her signed affidavit, that he liberated the pistol from the home of SS-Obersturbannfuhrer and Auschwitz Commandant Rudolf Hoess. Some notable excerpts from the document read, in part: '...My father served in the U.S. Armed Forces during World War...during the course of the service, like many other soldiers, [he] acquired war booty...There was one particular item that he always focused on, and that was the Walther PP...even more impressive to me was my father telling me that he had found this gun in the in a home of Rudolf Hoess, Commandant of Auschwitz Concentration camp...' The affidavit further states that the pistol remained solely in the possession of Bardenstein's family from the end of his service until his death. It is presumed that the pistol was found and recovered by Bardenstein at a Hoess family residence in Thuringina, a region that was indeed captured by the XX Corps (versus capture at Auschwitz, in Poland). Also included is the original U.S. Army Certificate of Retention/Customs Declaration identifying a 'Walther pistol 7.65' as being released to Bardenstein's superior, 2nd Lt. Thomas Barron, for Bardenstein to bring home, along with a camera, and signed by a superior officer on November 17, 1945. After the war, Bardenstein became a caterer in Rochester NY. He became locally famous as 'Bardy the kosher caterer.' Perhaps the most ironic connection that one can imagine! This presentation Walther PP and would never have been carried by Hoess on his daily rounds. It would have been stored with care, perhaps displayed, and carried on formal occasions. Nevertheless, it remains a vivid reminder of Hoess, among the cruelest men of all time.