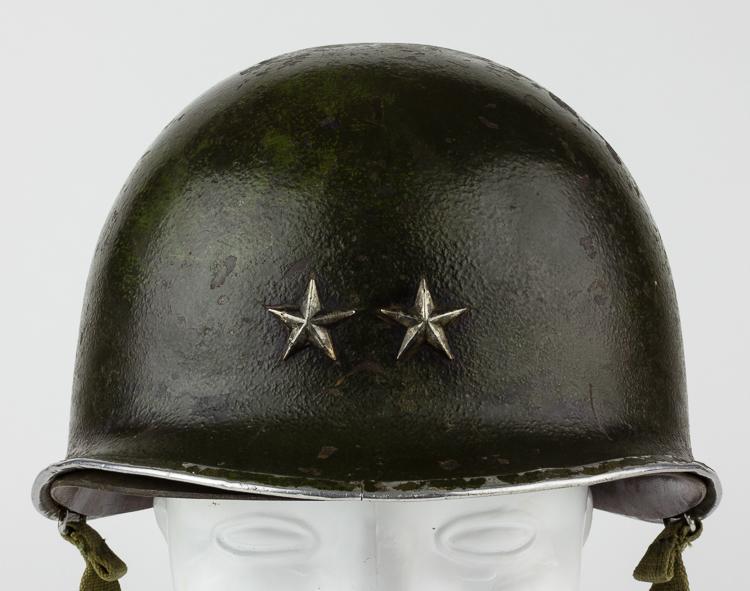 THE TWO-STAR GENERAL''S HELMET OF GEN. WILLIAM H. H. MORRIS, JR., WORN WHEN HE RELIEVED BASTOGNE
A special find, the mid-war American M1 helmet owned and worn by General William Henry Harris Morris, Jr. during his service in Europe. The helmet is an early war fixed bale M1 with the seam of the rim appearing at the front and with a very lightly textured dark green paint. At the front of the helmet, two stars are affixed, apparently brazed to the helmet surface and then painted to match the existing finish. The original chin strap remains attached, pulled above the front rim of the helmet. Within, the steel body bears the painted identification: "Maj. Gen. W. H. H. Morris, Jr." which clearly was applied many decades ago. The woven composite helmet retains all original straps and ties. It too has the same white painted identification and it has been done in the same hand. It is also aged identically to that written within the helmet. The front of the liner also has two stars painted thereon. A "Capac Manufacturing" stamp appears within. Overall very good condition. This helmet was purchased from a collection in New Jersey, where Morris was born and raised. During World War I, he served in France as a commander of a battalion in the 360th Infantry Regiment and he was wounded in combat. During World War II Morris commanded the 6th Armored Division during its stateside training, was promoted to brigadier general in January, 1942 and major general in May, 1942. In 1943 and 1944 he commanded II Armored Corps, which was later reorganized as the XVIII Airborne Corps incorporating the 82nd and 101st Airborne Divisions. In 1945, Morris brilliantly commanded 10th Armored Division in the relief of Bastogne during the Battle of the Bulge. Following this he was assigned to command VI Corps in the Seventh Army which drove from the Rhine to Italy in the spring of 1945.