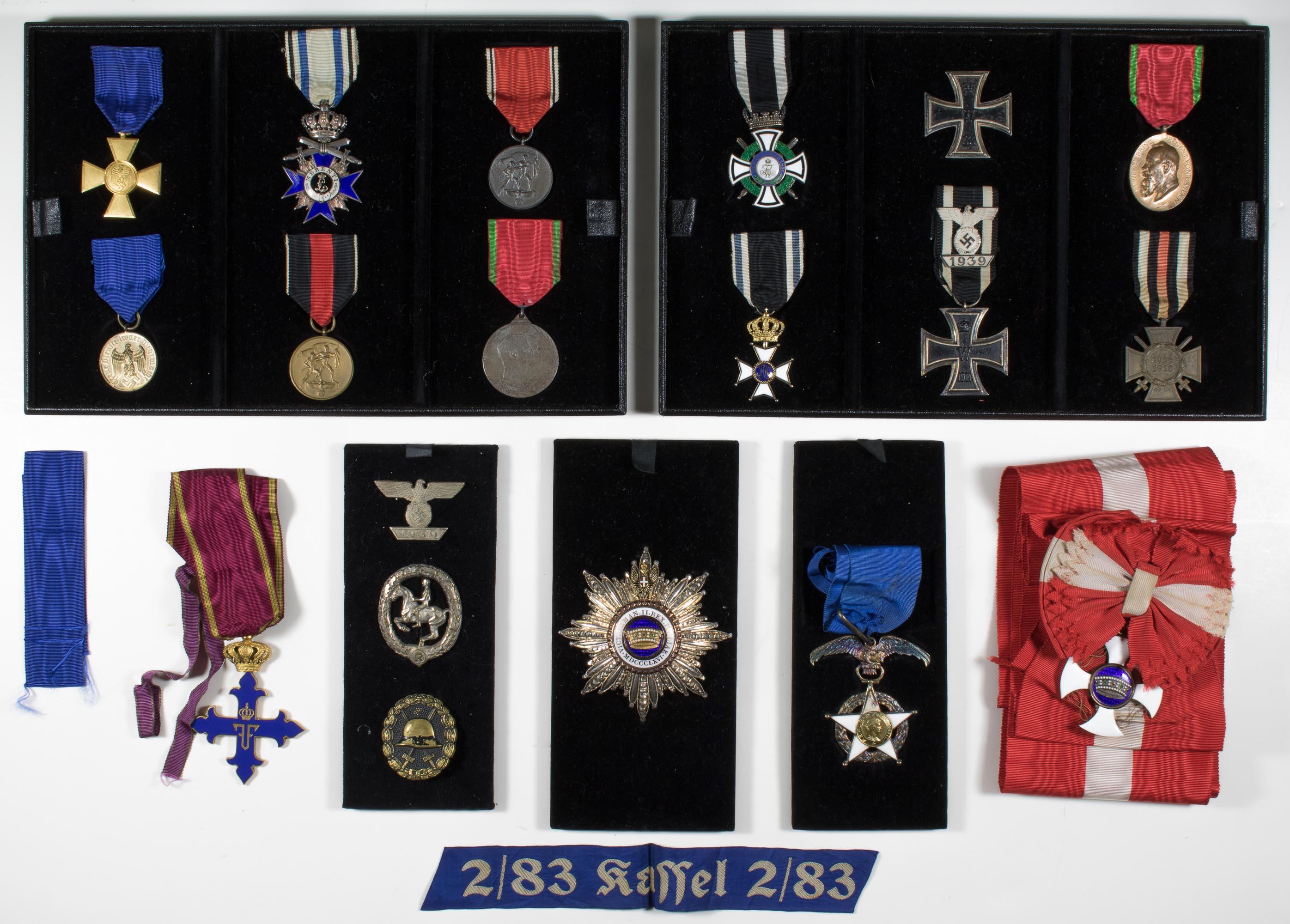 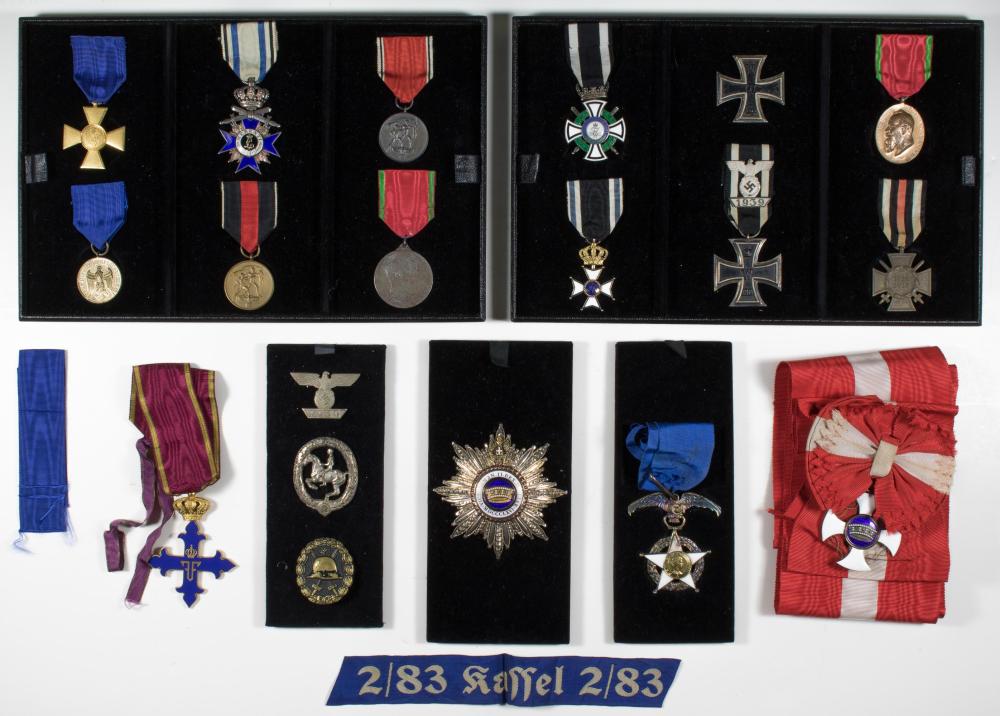 
Important grouping of 20 military and service medals awarded to General der Infanterie EUGEN RITTER VON SCHOBERT (1883-1941), killed in action on the Eastern Front while commanding the 11th Army during Operation Barbarossa. Included in this fabulous collection is: 1914 Iron Cross, First Class; 1914 Iron Cross, 2nd Class with Ribbon; 1939 Spange to the Iron Cross, with prongs, affixed to the aforesaid medal's ribbon; a second 1939 Spange to the Iron Cross; World War I Wound Badge in Black; German Equestrian Badge in Silver; Anschluss Medal; Sudetenland Medal; Wehrmacht 12 Year Service Award; Wehrmacht 25 Year Service Award; Honour Cross of the World War 1914/1918, marked 'G&S'; Bavarian Military Order of Max Joseph (probable reproduction); Bavarian Military Merit Order 4th Class with Swords; Bavarian Golden Wedding Commemorative Medal, 1918; Bavarian Jubilee Medal for the Army; House Order of Hohenzollern with Swords; Italian Order of the Crown Grand Cross Set including original Star and Cross with Sash; Republic of Chile Order of Merit, Officer Grade; and Romanian Order of Michael the Brave, Type III (1941-44), Commander's neck badge with ribbon. SOLD WITH: Romanian Order of Michael the Brave, Type III with Swords, with the award document signed by MICHAEL I (1921-2017), the last king of Romania, presenting the medal to von Schobert, Sinaia, Aug. 22, 1941, framed; WITH: cloth two-sided vehicle flag, 11.5 x 7.5 in., attributed to MICHAEL I and obtained from von Schobert's family; WITH: a 9 x 12.5 in. (sight) superb signed photograph of von Schobert in uniform, wearing the Chilean award about his neck, signed at bottom, also signed by the photographer, framed; WITH: a 4.25 x 2 in, brass plaque engraved 'v. Schobert', possibly from his desk, door, etc., a copy of 'Der Kampf' army newspaper describing and mourning his death; a complete copy of his Wehrpass, and a section of ribbon reading: '2/83 Kassel 2/83'. All of the medals are contained within a period medal box made by Godet, Berlin, dimensions 12.5 x 8.5 x 3.5 in. The box is covered in pebbeled black leather and lined in white satin. Following von Schobert's death, his family affixed within a silver plaque engraved: 'Eugen Ritter von Schobert 12. September 1941 gefallen als Generaloberst und Oberfehlshaber der 11. Armee'. Eugen Ritter von Schobert (1883 – 12 September 1941) led a battalion of Bavarian infantry during World War I. On 23 March 1918, he personally led his battalion in the crossing of a canal near Jussy against stiff British resistance, and was awarded the Knight's Cross of the Military Order of Max Joseph. After World War I, Schobert remained in the Reichswehr, steadily rising up the ranks. He commanded the 17th Infantry Division from 1935 to 1936 and the 33rd Infantry Division from 1936 to 1938. He took command of the VII Army Corps on 4 February 1938 and in September 1939 led it in the invasion of Poland. He also participated in the invasion of Belgium and Luxembourg and the Battle of France, and received this Knight's Cross award for his breakthrough of the Maginot Line and the capture of Nancy and Toul. In September 1940, Schobert was given command of the Eleventh Army, assigned to Army Group South for the invasion of the Soviet Union. During combat operations in the southern Soviet Union, Schobert was killed when his observation aircraft crashed in a Soviet minefield. He was succeeded by Erich von Manstein. An especially important award, in extremely fine condition. Note: Von Schobert's Knights Cross award is offered elsewhere in this sale.