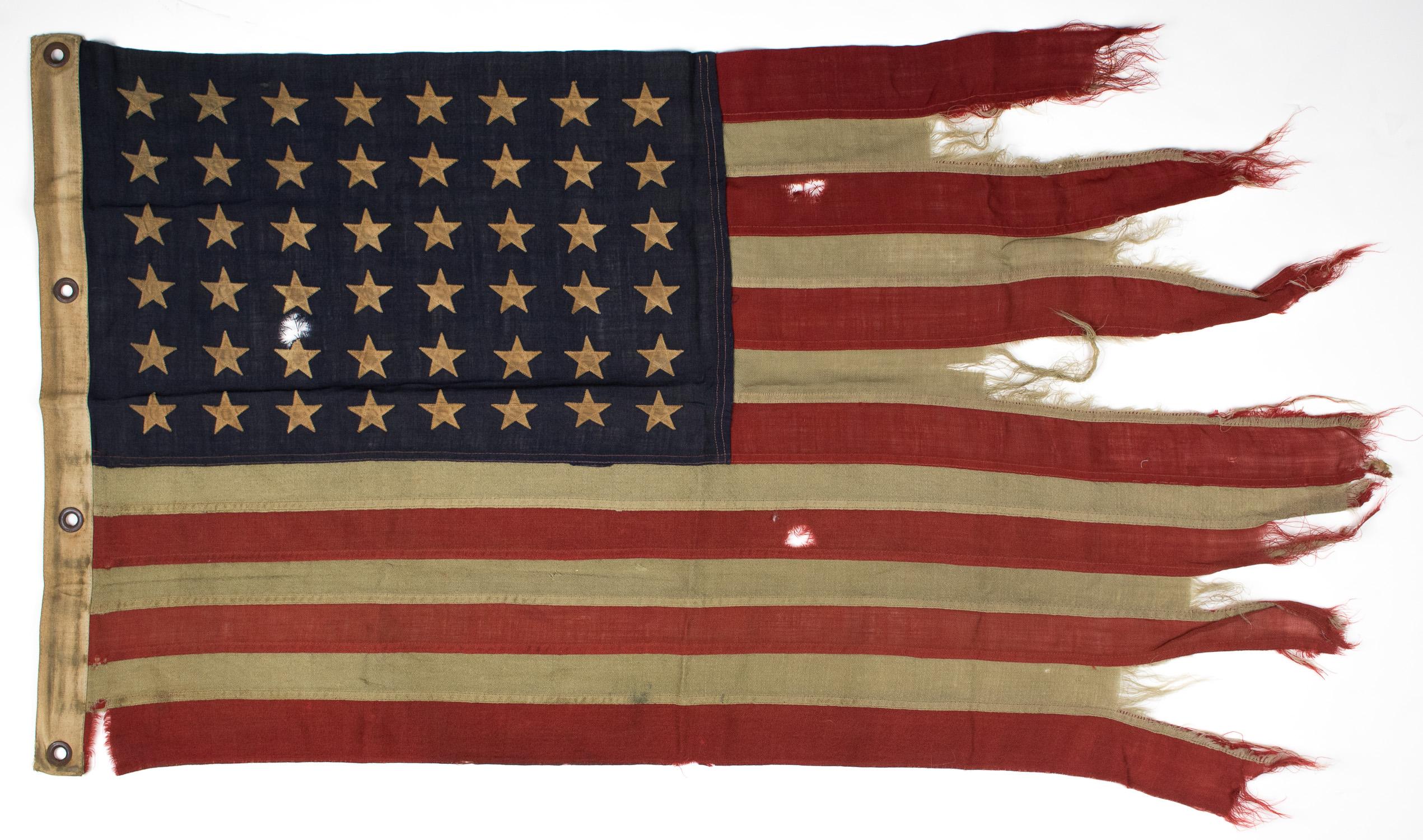 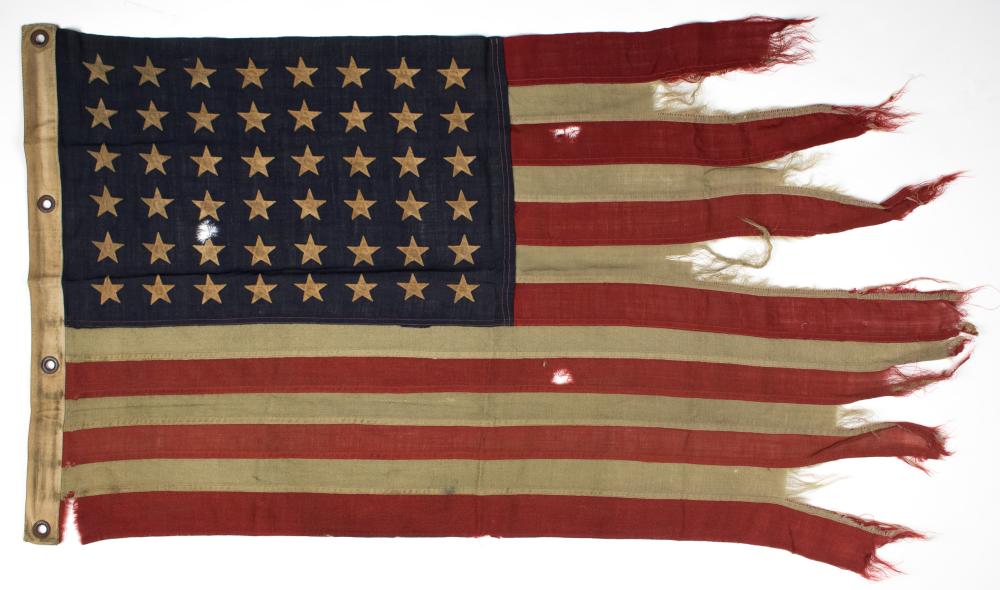 IWO JIMA BATTLE DIARY, MINESWEEPER FLAG, AND SAILOR'S EFFECTS
An important U.S. Navy grouping from the pivotal battle of Iwo Jima, Feb. 19 - Mar. 26, 1945, which took the lives of almost 50,000 American and Japanese soldiers, with a total of 20,000 Marines and naval personnel wounded. This grouping originates from Navy Fireman 1st Class Christopher Hays Hosler of West Orange, New Jersey, born in Pittsburgh in 1909 and serving aboard the YMS-1 Class Auxilliary Minesweeper YMS-407. The 136 YMS-407 was launched on September, 1943 and Hosler is shown on muster rolls as serving aboard the vessel at least as early as December, 1943. These small, lightly-armed vessels were the first on the scene at Iwo, some placing underwater demolition teams in place near shore to clear mines and obstacles and in turn drawing heavy Japanese fire. Others, being of shallow draft, accompanied the landing craft much farther into shore providing cover fire and knocking-out enemy gun emplacements. This grouping includes a battle-torn, shredded American flag, approx. 26 x 50 in. and appropriate for a vessel of this size. The soot-blackened flag bears the issue stamp of the Mare Island depot, with a slightly rust-stained note, ca. 1960, attached reading: 'Iwo Jima Feb. 23, 1945'. It makes sense that this flag flew during a battle, as a routine sea-flown flag would have been replaced long before deteriorating to such a state. Additionally, Hosler was a comparatively 'old man' at age 36, probably older than the vessel's captain, and may have been given the battle flag out of respect for his long service. The flag is accompanied by Hosler's sporadically-kept diary, 36pp. 12mo., with entries from Feb. 17, 1945 to his return to New York on Dec. 9, 1945. His first entry on Feb. 17 is headed 'Invasion of Iwo Jima' and reads in part: '...Alarm sounded for battle stations at 0430. Battle ships have been shelling the island for 4 days and nites. Here we go. Everybody scared. Gunfire from Jap shore batteries is too much. We have to turn back...Planes dive bombing the beach front. Cruiser Pensacola hit midships. Burst into flames [PENSACOLA took six hits from shore]...Here we go again for a second try at it. God be with us on this sweep up the island...Some strange looks on the crew members faces. What is this war why do we fight...Heavy fire as we go up to the beach...Our guns are now firing. The Navy's largest battleships are firing over and between us...gun crew knock[ed] out 3 pill boxes, hit a truck...high volcano end of island [Suribachi]...japs are firing machine gun fire at us from cover...here we go...for a try at the other side of island...a line of fire 3 blocks long just over rail...giving us fire protection...Feb. 19 Air raids by japs Scatter to sea...to hide from bombers...Feb. 24 Air raid. Gruesome task headless and legless corpse go by...Dead, wounded and dying 7000. Beach a mass of wreckage of ships, tanks...[Feb.] 24...Capt. ordered smoke generators started. Damn thing burst into flames. 7 planes shot down....[Feb.] 26 Flame throwers working on beach at high hard rock...days and nights without chow or sleep has the crew down. Here come dive bombers again...Shot bombers down just ahead of bow...Rocket bomb all but took engines out of engine bed...Lots of star shells up...Feb. 27...Far end of island rec. a shelling...Feb. 28...Lost our radar and sound gear. ASt anchor in shelter of five tin cans. A shit house full of 50 cal and mortar fire on us...Jap corpse gutted laying on aft...Mar. 1st...500 yds off port side men are blowing each other to bits...' Later entries are often condensed, noting Hosler's desire to transfer, the rescue of a B-29 pilot, shooting down attacking bombers, refitting at Saipan, minesweeping in Japan, men lost in a typhoon, etc. His last entry, made upon returning home in New York, includes a prayer thanking God for returning his safe and in good health, and hoping for the safety of the crewmen still serving upon the YMS-407. Also present is Hosler's small handmade canvas bag, 6 x 4.5 in., marked: U.S.S.Y.M.S. 407 3-19-45 IWA-O JIMA', three chest ribbons with four battle stars, World War II service medal, a 1946 'LOVE' bracelet made of Philippine coins, some buttonhole badges, 23 pieces of torn American bills, once part of a lengthy 'short-snorter' that Hosler probably tore up at war's end and shared with his closest friend.