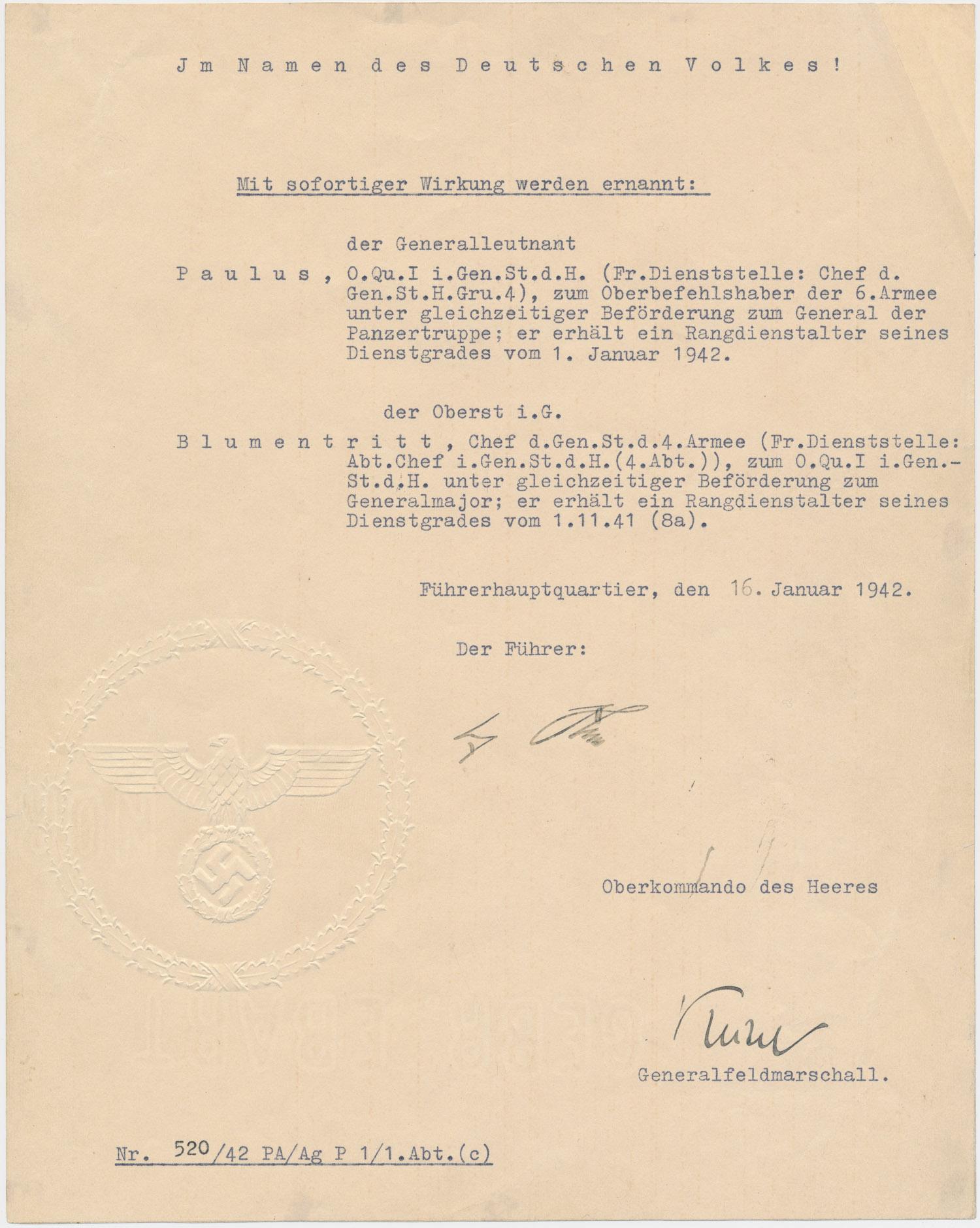 Description:
ADOLF HITLER (1889 - 1945) Fuhrer of Germany and Nazi Party leader, Hitler's bloody rise to power, his military seizure of most of Europe and North Africa and his genocidal racial policies culminated in suicide in his Berlin bunker as Russian troops approached. Historic typed D.S., 1p. 4to., 'Fuhrer Headquarters', Jan. 16, 1942, a promotion document of two of the most prominent figures in the German Wehrmacht, namely Generalleutnant FRIEDRICH PAULUS (1890-1957) to the rank of General of the Panzer Troops and commander of the Sixth Army, a position he held throughout the disastrous Battle of Stalingrad. The document also promotes Chief of Staff of the Fourth Army GUNTHER BLUMENTRITT (1892-1967) to the position of Senior Quartermaster of the Fourth Army and the rank of Generalmajor. Hitler signs at the conclusion, and WILHELM KEITEL also signs at lower-right as General Field Marshal. Uniquely, this document bears a blank space for the signature of the Commander-in-Chief of the German Army, once Walther von Brauchitsch. No signature is present, however, as Brauchitsch's failures in the Battle of Moscow two months prior led to his termination just before this document was written, after Hitler had appointed himself to the position instead. Blind-embossed German seal present at lower-left. Light tear at upper-right corner, archivally repaired on the verso, else fine condition. Under Paulus's command in Stalingrad, over 265,000 German personnel were captured by the Allies, largely since Hitler prohibited any attempt to break out or capitulate. Paulus surrendered Stalingrad on 31 January 1943, the same day on which he was informed of his promotion to Field Marshal. Hitler expected Paulus to commit suicide, ranting to his staff that there was no precedent of a German field marshal ever being captured alive. Blumentritt's 4th Army, also serving on the Eastern Front, only narrowly escaped envelopment and annihilation by the Russians outside Moscow. A truly outstanding document.