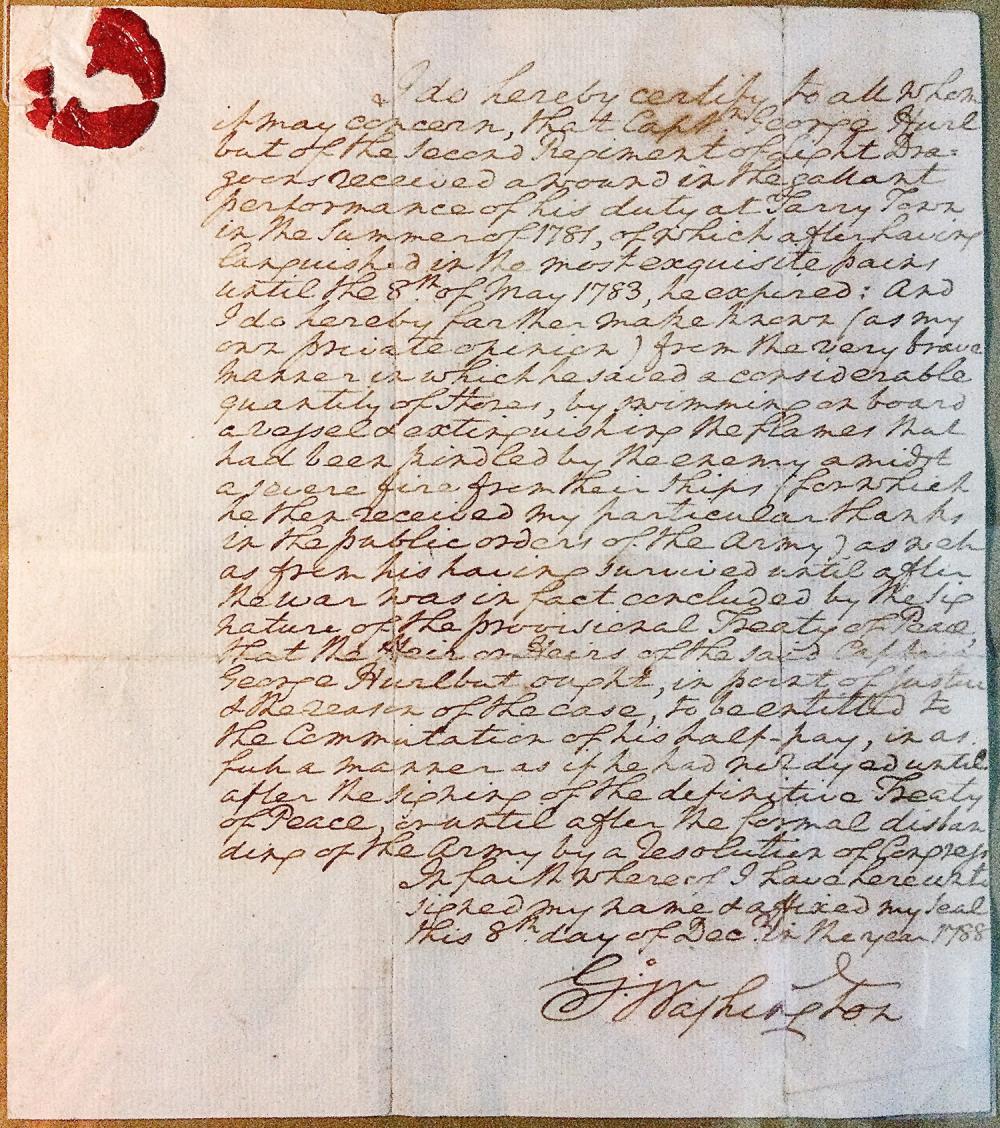 Description: GEORGE WASHINGTON
(1732 - 1799) First President of the United States and commander of the Continental Army during the Revolutionary War. WASHINGTON ADVOCATES FOR A PENSION FOR A WAR HERO Fine content A.D.S., 1p. 4to. with blank integral leaf (docketed), [n.p.], Dec. 8, 1788 (exactly one week before his election to the presidency), a heartfelt description of the heroic death of Revolutionary War Captain George Hurlbut of the Second Regiment of Light Dragoons, and Washington's noble attempt to secure half-pay for his descendants. In large part: '...I do hereby certify to all whom it may concern that Captn George Hurlbut of the Second Regiment of Light Dragoons received a wound in the gallant performance of his duty at Tarry Town in the summer of 1781, of which after having languished in the most exquisite pains until 8th of May 1783, he expired. And I do hereby farther make known (as my own private opinion) from the very brave manner in which he saved a considerable quantity of stores, by swimming on board a vessel & extinguishing the flames that had been kindled by the enemy amidst a severe fire from their ships (for which he then received my particular thanks in the public orders of the Army)...from his having survived until after the war was in fact concluded by the signature of the provisional Treaty of Peace, that the Heir or Heirs of the said Captain George Hurlbut ought, in point of the Justice & the reason of the case, to be entitled to the Commutation of his half-pay...' Boldly signed at the conclusion, with Washington's red wax seal at the upper-left. Folds, seal slightly broken as shown, else fine condition. Matted and framed with a steel-engraved portrait. This letter is referenced in 'The Papers of George Washington'. On the night of July 15, 1781, five American river sloops carrying four eighteen-pound cannons, flour and other supplies from West Point and the Hudson Highlands came under attack from the approaching British gun­boats. Lacking support, Capt. Hurlbut and twelve fellow dragoons took a position on board one of the sloops to protect the valuable stores. Armed only with the swords and pistols of cavalry soldiers, Capt. Hurlbut kept his men concealed until the enemy were alongside, at which point he ordered them to fire. Soon surrounded, Hurlbut ordered his men to jump overboard and make for the shore, and the British immediately boarded the grounded sloops and set them afire. Heavy volleys from the American troops forced the British to retreat before seizing the supplies, and several men from shore jumped into the river and swam toward the burning sloop, extinguished the fire, and saving the vessels and most of the cargo. While Capt. Hurlbut had been in the water, however, he was struck with a musket ball through the thigh. General Washington reportedly visited the injured officer several times during his recovery. After a few months of improvement, Hurlbut's condition suddenly plummeted. He wrote directly to Washington in March 1783 - just three months before his death. He wrote: 'After having served with some degree of honor...The wound which I received almost two years ago is at length healed, but the disagreeable symptoms...forbid me to expect a return of health...my only remaining wish is to return to New London...in the circle of my friends to wait a decision of my fate...'. The severity of Hurlbut's wounds prevented his travelling any great distance by land, so as one last favor, he asked Washington to arrange a trip by sea, and thanked him for '...your excellency's tenderness and attention to me during all my confinement...the many favors I have received from your excellency are deeply impressed in my grateful heart...'. Washington granted this trip by mid-April 1783, but Hurlbut died weeks later. A superlative letter clearly demonstrating Washington's support and devotion to the brave men who served beneath him.