Your message has been sent.
ATTENTION: You are currently using an unsupported browser. We recommend switching to Google Chrome or Edge for the best on-site experience.
An error has occurred while processing this page. The site administrator has been notified. We apologize for the inconvenience.
Back to auction preview 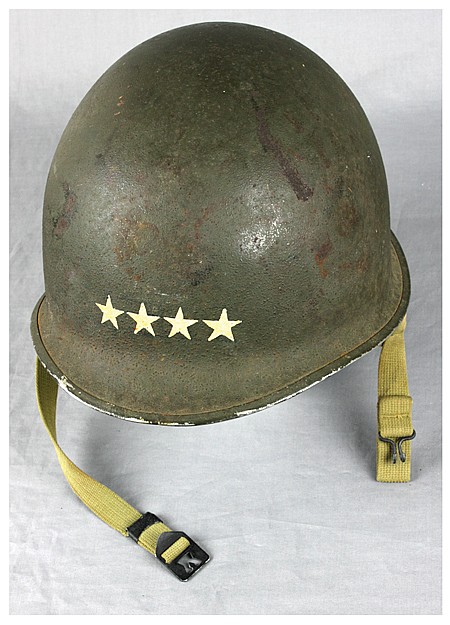 GEN. DWIGHT D. EISENHOWER'S FOUR-STAR GENERAL'S HELMET
Perhaps one of the most significant World War II relics to ever come to the auction block is Gen. Dwight D. Eisenhower's World War II four-star general's helmet, well-used, with outstanding provenance. This M-1 steel helmet bears the original dark green "pebbled" finish, with typical oxidation and a few chips, entirely consistent with use. At the front of the helmet appear four white stars, each 3/4" tall. The chin straps are present, though the line is not (undoubtedly removed for use in Eisenhower's five-star replacement helmet). Near the end of the Allied campaign in North Africa, Eisenhower received his fourth star (and, presumably, this helmet), and on Dec. 20, 1944, he was promoted to General of the Army, thus gaining his fifth star. At that time, this helmet became obsolete, and then or soon after was given by Eisenhower to his chief aide, Col. Ernest "Tex" Lee who brought it home with him at war's end. From the estate of the recipient, Col. Ernest "Tex" Lee, who served throughout the war as Eisenhower's Executive Officer and Aide de Camp. Lee joined Ike in June, 1941 and assisted in the planning of the invasions at Normandy, Sicily and the ultimate defeat of Germany. Accompanied by a letter from Lee's son indicating that Col. Lee had stated to his family that he had obtained this helmet directly from Eisenhower during the European war and that it has remained in the family since that time. Undoubtedly Ike wore this helmet at the front and on inspections during the campaigns in North Africa, Sicily, Normandy, and on the drive across France and the Low Countries. A museum-quality piece of history!