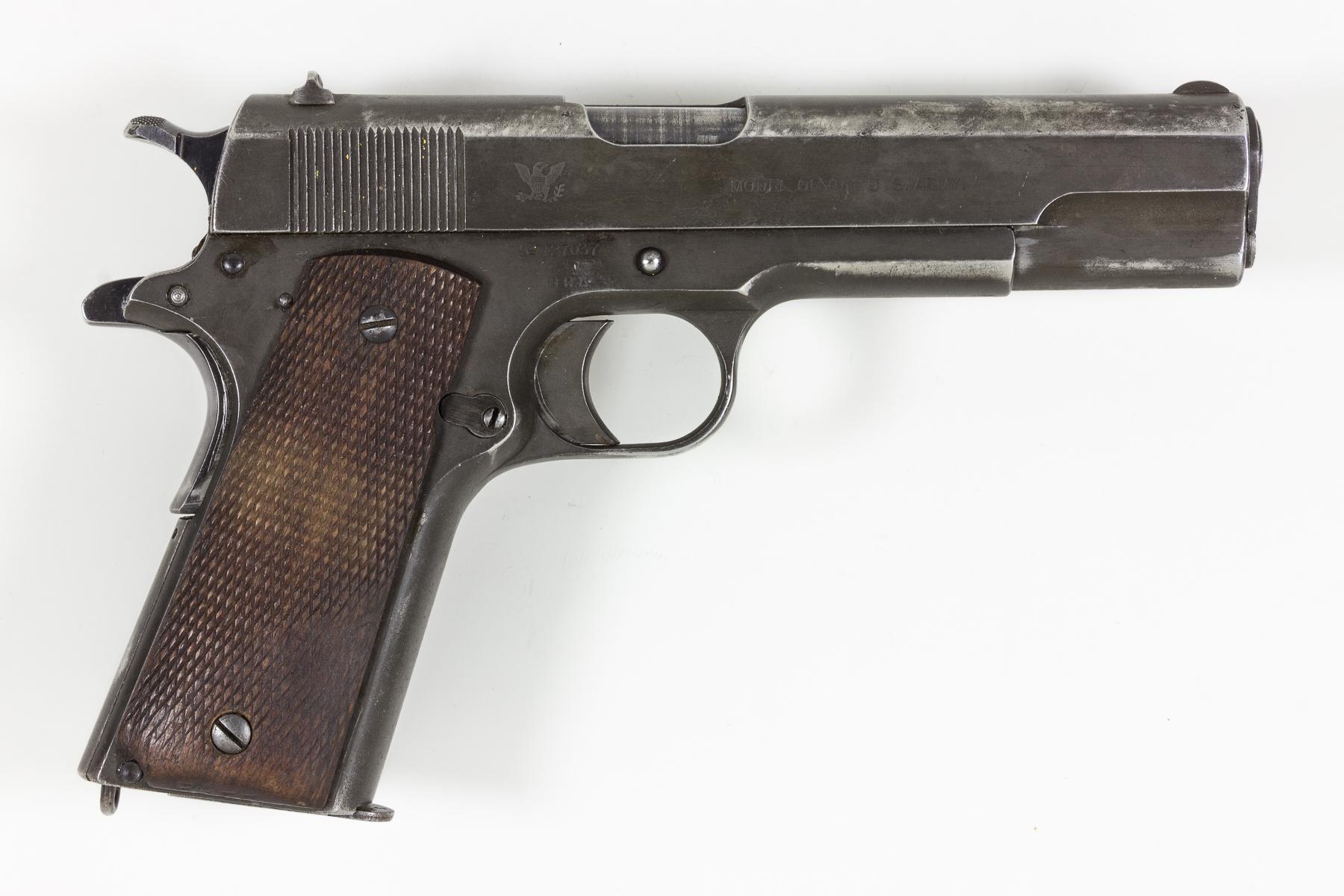 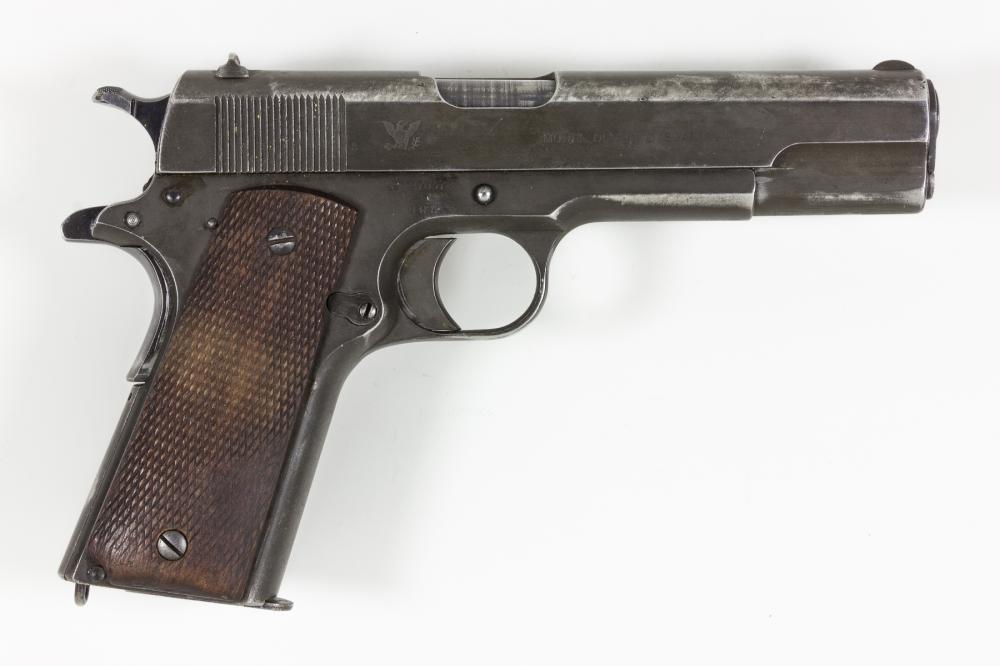 FROM THE ESTATE OF GEN. CLARENCE R. HUEBNER, COMMANDER OF THE 1ST INFANTRY DIVISION IN THE FIRST WAVE AT OMAHA BEACH A fine association example of a U.S. military M1911 pistol, .45-caliber, 4 3/4" barrel, 8 1/4" overall, manufactured by the Springfield Armory. The left-hand side of the slide is marked "Springfield Armory U.S.A." above the slide stop, with "Patented Apr. 20, 1897/Sept. 9, 1902. Dec. 19, 1905. Feb. 14, 1911/Colt's Pt. F.A. Mfg. Co." forward, and the flaming shell of the U.S. Ordnance Corps on the rear of the slide. The left-hand side of the frame is marked "United States Property" forward of the slide stop, with a second flaming shell above the magazine release. The right-hand side of the slide is marked with an American eagle and "Model of 1911 U.S. Army", while the frame bears the serial number "No 127037". This indicates that the pistol was manufactured between April of 1914 and April of 1917, just prior to the United States' entry into World War I. The marking "N.R.A." appears below the serial number, indicating that the pistol was released for public ownership at the war's end for distribution to members of the National Rifle Association through the Civilian Marksmanship Program. The pistol retains the majority of its original blued finish, but shows notable holster wear to the extremities of the slide, the front of the frame and the trigger guard. The checked wood grips lack the distinctive "double-diamond" pattern seen on most early M1911's, and are worn nearly smooth in patches at the bottom-front edges, indicating extensive use. The bore retains a mirror-like finish and shows only slight softening to the rifling, again commensurate with extensive use, and the crown remains well-defined. The pistol shows some handling marks and signs of honest wear overall, and cocks and fires properly. NRA grade excellent. The pistol is housed in a brown leather M3 "tanker"-style shoulder holster, bearing the embossed initials "US" on the front and maker-marked "U.S. Boyt 43" on the reverse. The owner's name, "Maj Gen Huebner", is inscribed in black ink inside the back panel. The brass fittings show green verdigris, and the bottom snap has detached, with much honest wear visible overall, else very good. CLARENCE R. HUEBNER (1888-1972) American general who commanded the 1st Infantry Division, popularly known as the "Big Red One", in early August of 1943. He commanded the division during the D-Day landings on June 6, 1944, where it was the first force to face the Germans on Omaha Beach, and he joined his men on the beach the same day. The division was instrumental in the breakthrough following the battle for St. Lo and in foiling the German counteroffensive at Mortain. After the Allied breakout in Normandy, the division advanced rapidly, arriving at the German border in early October of 1944, where it was committed to battle at Aachen, which it captured after two weeks of heavy fighting. After experiencing heavy fighting once again in the Huertgen Forest, the division briefly rested but soon returned to counter the German offensive at the Battle of the Bulge in December, 1944. In January, 1945, Huebner was named commander of the V Corps, which he commanded in its advance to the Elbe river, where elements of the corps made the first contact with the Soviet Red Army. By war's end, the division had advanced into Czechoslovakia. Following the German surrender, Huebner served as the Chief of Staff for all American forces in Europe, and in 1949 was named the final military governor of the American occupation zone in Germany. This pistol originates directly from General Huebner's estate and is accompanied by a letter of provenance signed by a direct linear descendant. Moreover, it is accompanied by an original 7 3/4" x 9 3/4" color film transparency, a fine portrait of Gen. Huebner standing among ruined defenses on the Siegfreid Line, with his pistol and holster clearly visible beneath his left arm. The lack of an arched mainspring housing clearly identifies the pistol in this photo as a pre-A1 M1911, and the wood grips again lack the "double-diamond" pattern and display the distinctive wear patterns seen on the weapon offered here. Two additional color transparencies of Huebner are also present. Altogether, an extraordinary personal weapon directly attributable to one of the most notable U.S. generals of World War II. All firearms purchases must be completed through a Federal Firearms License holder, and the purchaser is responsible for all associated fees. No shipping outside of the United States.