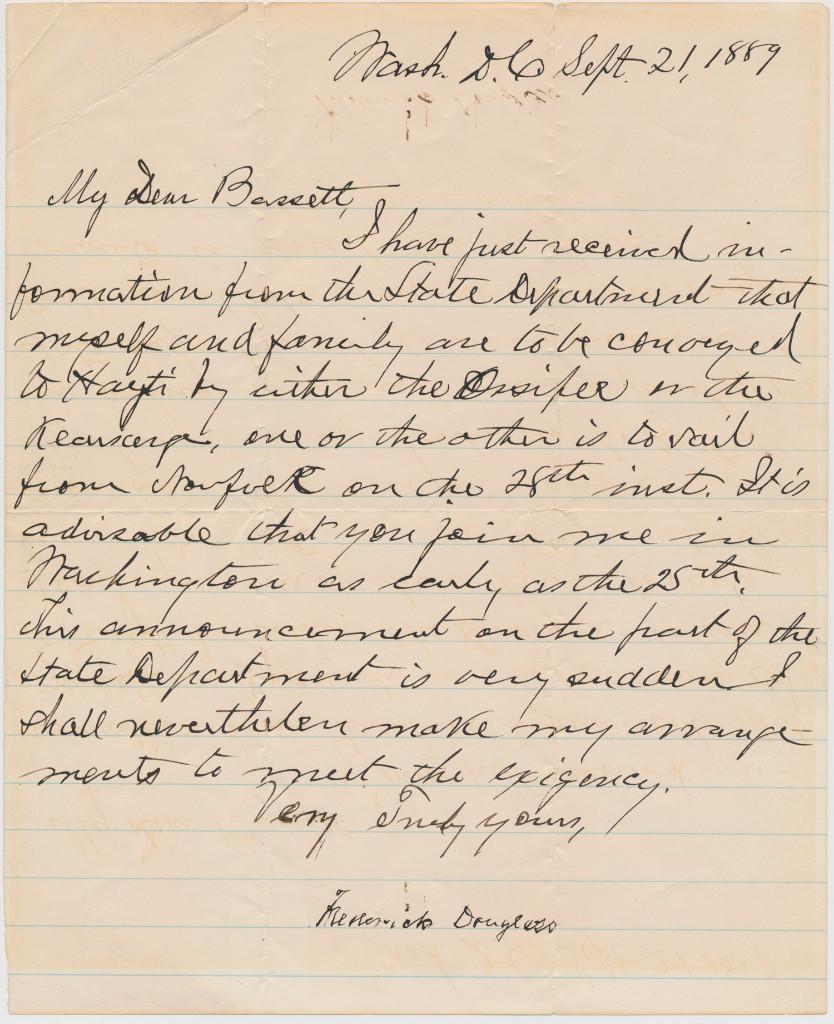 FREDERICK DOUGLASS
(1817 - 1895) Black-American reformer born a slave, Douglass was instrumental in the creation of the Union Negro regiments which fought with great distinction during the war. Historically-important manuscript L.S. 'Frederick Douglass', 1p. 4to., Washington, Sep. 21, 1889 to former Ambassador to Haiti Ebenezer D. Bassett, who held the post some twenty years earlier. Douglass had been appointed to the ambassadorship by President Benjamin Harrison and here advises Bassett of his 'very sudden' plans to embark for the island. He writes, in part: '...My dear Bassett, I have just received information from the State Department that myself and family are to be conveyed to Haiti...on the 28th inst. It is advisable that you join me in Washington as early as the 25th. This announcement on the part of the State Department is very sudden. I shall nevertheless make my arrangements to meet the exigency...' Very good. Douglass arrived with his family and Bassett in Port-au-Prince in time to witness the resolution of an episode of civil conflict in Haiti. General Florvil Hyppolite, supported by the Americans, had just emerged victorious over General F.D. Legitime, who had the support of France. On two occasions, the American Navy had entered Haitian waters to intimidate the partisans of Legitime. At first, the Haitians were suspicious of Douglass who, as secretary of President Grant's 1871 diplomatic mission, had visited the Dominican Republic and advised on its annexation by the United States. Despite the fears and suspicions held about Douglass among Haitian leaders, however, the U.S. diplomat, escorted by Bassett as his assistant and translator, fit well into Haitian society. Douglass remained in Haiti for two years, returning to the United States in 1891. Inspired by his surroundings and by the high price paid by the Haiti's revolutionaries for the sake of freedom, Douglass left a lasting appreciation of his love and respect for Haiti in his poem 'Until She Spoke'. Even more important was a powerful speech Douglass gave to open the Haitian Pavilion at the World's Columbian Exposition in Chicago on Jan. 2, 1893: 'We should not forget that the freedom you and I enjoy today, is largely due to the brave stand taken by the black sons of Haiti ninety years ago...striking for their freedom, they struck for the freedom of every black man in the world'.