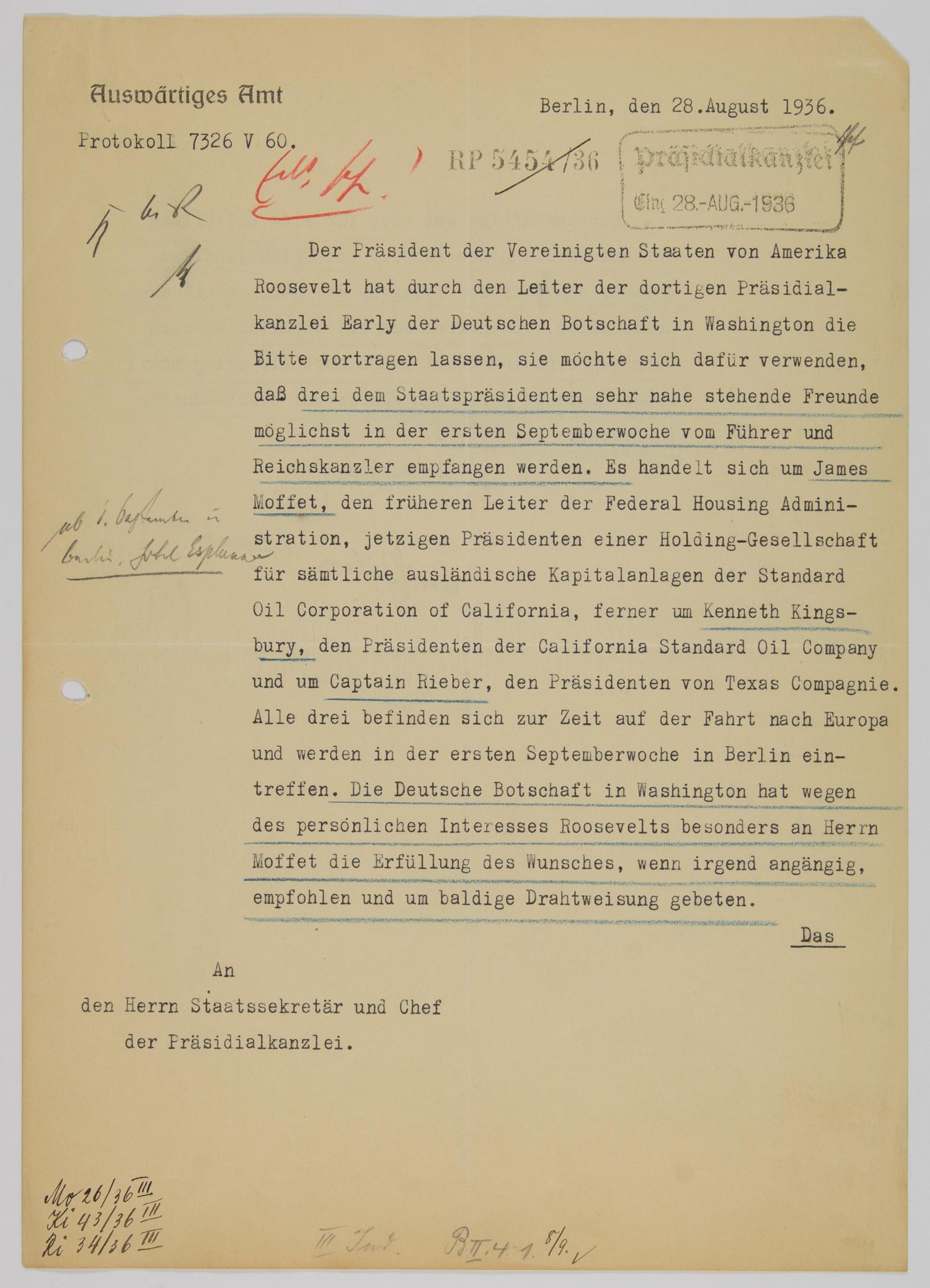 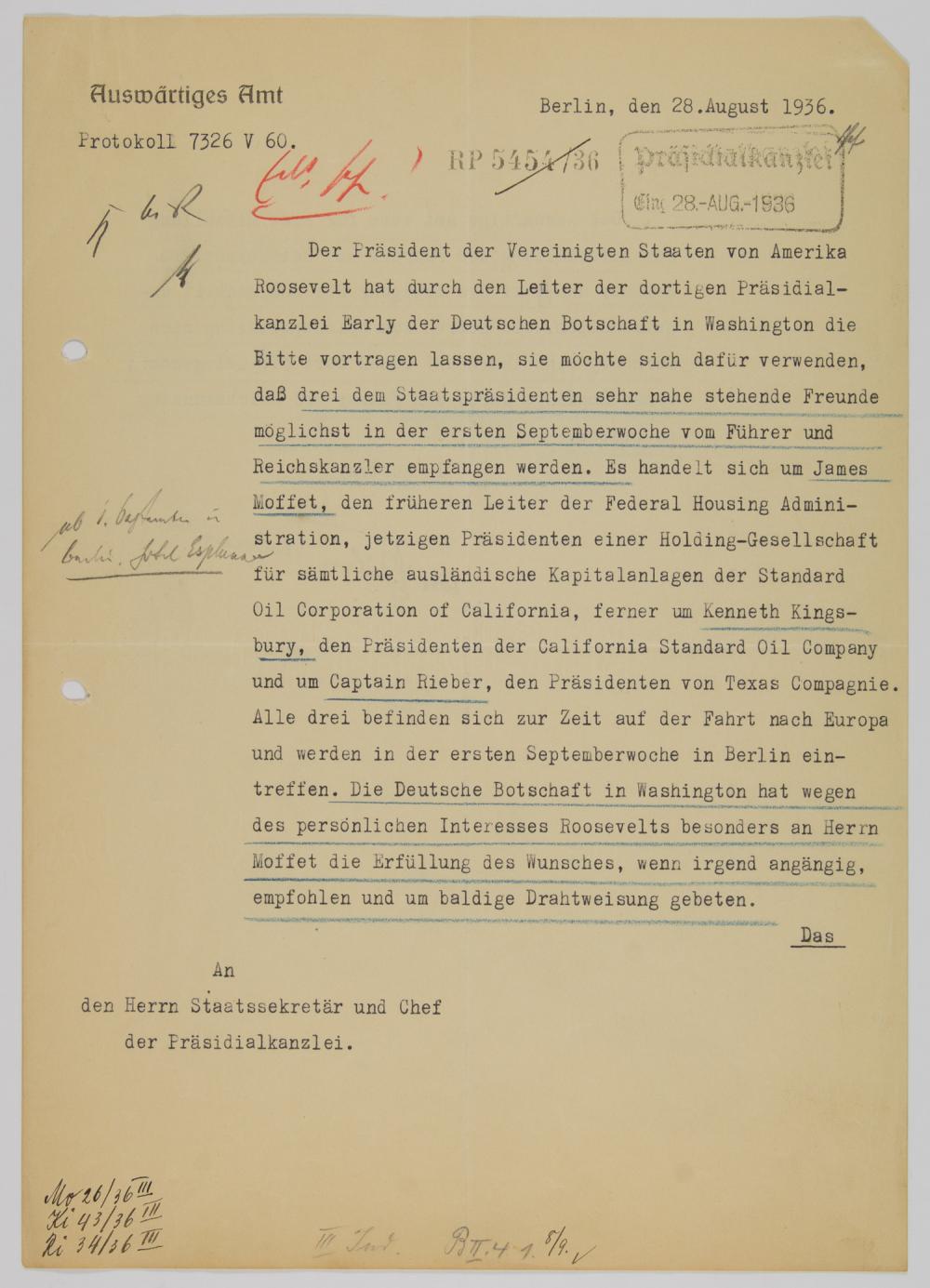 FRANKLIN ROOSEVELT ASKS THAT HIS FRIENDS BE GRANTED AN AUDIENCE WITH ADOLF HITLER
An amazing set of eight German Chancellery and Foreign Ministry documents evidencing attempts made on behalf of President Franklin D. Roosevelt to obtain a private audience with Chancellor Adolf Hitler for three of FDR's close friends, prominent industrialists and administrators. The first document is a limited release printed notice issued by diplomat HANS LUTHER (1895-1945), an advisor to von Ribbentrop and later Foreign Ministry liaison to the SS. The 1p. 4to. document is the text of his Aug. 21, 1936 telegram from Washington, in part: '...Roosevelt has made known to the embassy, via Early...his request that we should make an effort to arrange for three very close friends of his to be received by the Fuhrer and Reich Chancellor. The people in question are James Moffet, formerly head of the Federal Housing Administration, and now chairman of the holding company for all foreign capital investments of the Standard Oil Corporation of California...Kenneth Kingsbury, Chairman of the Standard Oil Corporation of California, and Captain Reiber, chairman of the Texas [Texaco] Company...In view of Roosevelt's personal interest...I recommend very strongly that his request should be granted...' There follows a pencil note, 2pp. 12mo., referencing where the guests might stay, entrances to be used, etc. The third document is on Foreign Ministry letterhead,1p. 4to., Berlin, Aug. 26, 1936, text of a second telegram from Luther in Washington giving the exact date of arrival of the American party and asking that they 'be received in audience as soon as possible after their arrival. The head of the President's office...asked it to be known once again what great importance Roosevelt attaches to Moffet being introduced to the Fuhrer...' Beneath the telegram text is a signed forwarding message signed by VICCO VON BULOW-SCHWANTE (1891-1970), Chief of Protocol and later Ambassador to Belgium. Von Bulow-Schwante was intimately associated with the drafting of regulations determining the definition of a 'Jew' in German race law. On Aug. 26, a 1p.4to response on Chancellery letterhead is sent to State Minister OTTO MEISSNER, signed by senior diplomat WALTHER HINRICHS (1882-1964). He advises that he has not received an official copy of the request through official channels, but notes that Minister of Foreign Affairs Joachim von Ribbentrop had been informed by Hitler in person: '...that audiences are not welcome to him in the period prior to the Reichs Party Rally. But the letter from the U.S. President is an exceptional one, and reveals a particular interest in the matter...' At bottom, Meissner adds an initialed note: 'Promise for end September'. On Aug. 28, VICCO VON BULOW-SCHWANTE again writes on Foreign Ministry letterhead, this time reiterating his case and pressing for a response. He further suggests that the Americans be invited to meet with Hitler in Nuremberg during the rally days. There follows a typed letter to Otto Meissner by WERNER KIEWITZ (1891-1965), German diplomat later punished with assignment to the murderous Dirlewanger Brigade. Kiewitz was an ministerial advisor under Otto Meissner and served as escort officer for imprisoned Belgian King Leopold III, earning Hitler's enmity for treating the monarch with too much care. Implicated in the July 20 plot, he was demoted and sent to the Dirlewanger Brigade in late 1944, losing an arm. Kiewitz advises that the Americans would advise the following day if their trip to meet Hitler in Nuremberg would be possible, and at the same time, they will be told that a meeting at any other place would be impossible. At bottom, Meissner initials his 'Yes' to the suggestion that their transport to Nuremberg be at the expense of the Chancellery. The situation is settled in a memo sent with signed cover letter by SIEGFRIED MEY (1891-1954), also a senior diplomat in the Foreign Ministry in Berlin, to the Chancellery. He notes on Sep. 8th that the Americans had left Berlin four days earlier without giving their destination nor whether they still wished to meet Hitler, and had made no contact with the Foreign Ministry. Almost all of these documents are accompanied by full translations. Some bear file holes, annotations and dockets, overall near fine. The entire situation would turn out poorly for Messrs. Moffet, Kingsbury and Rieber. Indeed, Rieber's alleged pro-Nazi sympathies led to a boycott of Texas Oil's stations, forcing his resignation. All three were wealthy oil men, and were very likely considering business arrangements with Hitler - not unlike that made by Standard Oil of New Jersey, which had secret arrangements with the Nazis selling oil through a series of shell companies and third party traders. Roosevelt himself would remain silent about Hitler's European adventures until essentially the invasion of Poland in 1939, no doubt fearing condemnation by American isolationists.