Back to catalog
Lot 9 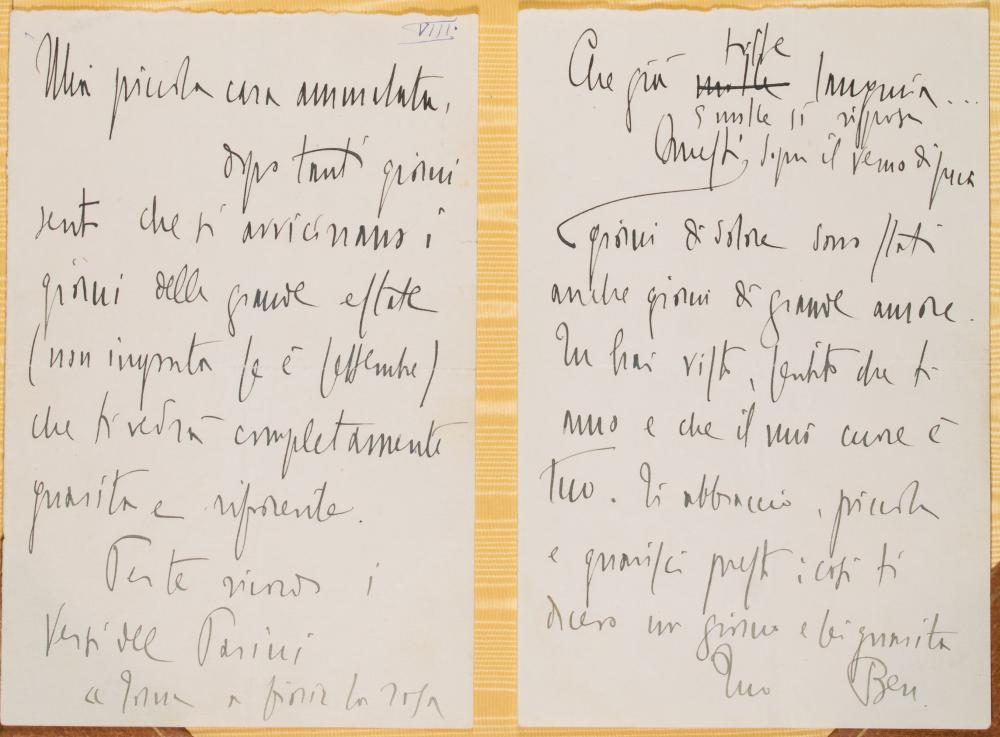 Description:
(1883 - 1945) Italian dictator whose fascist supporters marched on Rome, securing him power; allied with Hitler, after many military and political setbacks he was captured and executed at war's end by partisans. MUSSOLINI WRITES ROMANTIC LOVE LETTER TO HIS MISTRESS, CLARA PETACCI Extraordinarily rare A.L.S. 'Ben' in Italian, 2pp. 8vo., [n.p., n.d.], an extremely romantic love letter to an unknown recipient, though almost certainly sent to his mistress, CLARA PETACCI, who would be killed with Mussolini, the pair hung by their heels at war’s end. In full: 'To my dear little sick girl, After so many days I feel that the days of a great summer are near, no matter if it September, when you will be completely well and blooming like a flower. For you the verses of Parini are living: Flowering back is the rose. The days of anguish are also days of great love. You see how much I love you and my heart is all yours...I love you my little one. I hope the day you feel well is near. Get well quick, that is what I told you one day, and you got well. Yours, Ben'. Sold with an S.P., 7.5 x 9.5 in. b/w, a full-length portrait of Mussolini sitting on the edge of a boat, signed in full at the right, adding the date: '10./9. 31-IX'. One small crease, else fine. With an English translation, and housed within a brown leather presentation folder with gilt embellishments. On 27 April 1945, Mussolini and Petacci were both captured by partisans and the following day, she and Mussolini were both executed, only after throwing herself on him in a vain attempt to protect him from the bullets. On the following day, the bodies of Mussolini and Petacci were taken to Milan and strung upside down in front of a petrol station, where their bodies were abused and mutilated by the enraged crowd.