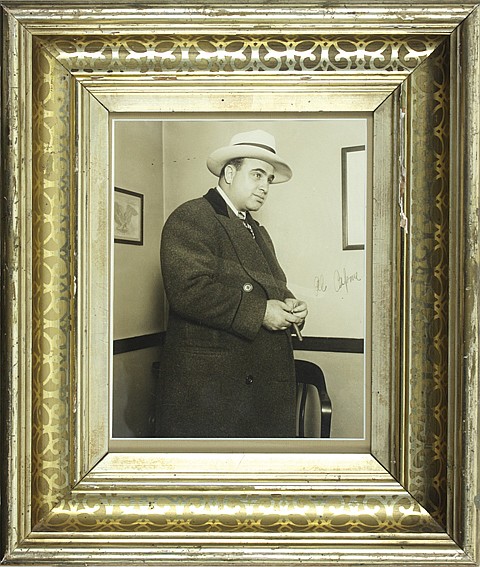 ALPHONSE CAPONE
(1899 - 1947) American gangster and Chicago mob giant, he orchestrated the St. Valentine's Day Massacre, wiping-out Bugs Moran's gang and ruled over the nation's largest criminal enterprise. Capone was eventually nabbed on tax evasion charges and passed a comfortable eight years in prison. An extraordinarily rare S.P. "Al Capone" 9" x 7" (sight) sepia photograph of the notorious gangster at the height of his career (circa 1930), depicting him standing, 3/4 length, in an overcoat and white fedora holding a cigar in his hands and signed to the right of his image. A tremendous rarity, this is the first signed photograph to appear on the market since 1994 (Riba, Mar 12, 1994, Lot 153, $13,000). Adding to the photograph's desirability, this is the first time we have ever seen an example that is not inscribed. Provenance: Charles Hamilton Galleries. This piece was published in M. Wesley Marans' 1983 book, Sincerely Yours (p. 30), but was not part of Marans' personal collection. The photograph bears some light uneven toning that runs across Capone's mid-section and slightly affects the bottom of the "A" in "Al", a few minor soiled spots at top left and minor creases about an inch above the signature, else very good to fine condition. Housed in a antique gilt frame and ready for display.