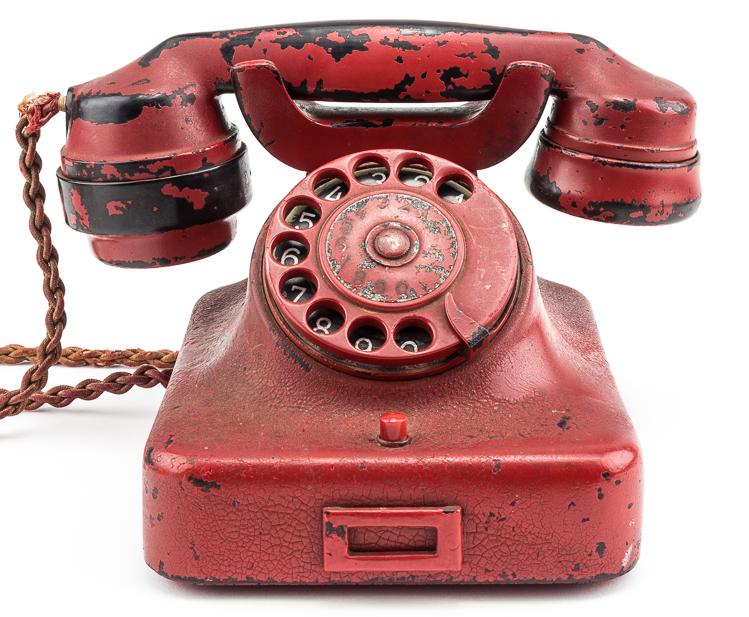 ADOLF HITLER''S PERSONAL TELEPHONE, presented to him by the Wehrmacht and engraved with his name, gifted by Russian officers to Montgomery''s Deputy Chief Signals Offcer who had arrived at the Fuhrerbunker only days after the fall of Berlin.

ARGUABLY THE MOST DESTRUCTIVE "WEAPON" OF ALL TIME, WHICH SENT MILLIONS TO THEIR DEATHS AROUND THE WORLD

This Siemens phone, originally bearing a black Bakelite body, was professionally painted a deep red and bears on the reverse a 1 1/2" engraved NSDAP eagle and swastika above the recipient''s name, "ADOLF HITLER", appearing beneath the handset cradle. The rotary dial is comprised of red Bakelite with a faded interior number dial on its surface, with a black numbered dial beneath. The handset bears an approx. 40" braided cord. Interestingly, the handset must be rotated almost 60 degrees before it can be removed from the cradle, this to prevent it from shaking loose during transport in a train, automobile, etc. The phone also has a 54" braided connection cord which terminates in four metallic loops: these loops would be pulled over pin-type connectors for quick connection. On the bottom, the phone is ink-stamped: "W38 Fg. tist 182b 31V.4." [Model W38 Fernsprechgeraet Tischstation 182b.; 31 representing the factory Berlin-Siemensstadt, "V" for 1940, "4" for April], and it is marked "A.23." in one corner. Paint on the left side of the phone is slightly darkened or scorched, and is crazed. Dimensions 6" wide, 7 1/2" deep, 6" tall. The telephone is stored in a vintage leather carrying case with strap which belonged to Brigadier Rayner and which bears various shipping line and destination stickers of the time, as well as a British wartime mail economy notice bearing the officer''s typed name.

This incredible relic, unequaled in historic importance, is accompanied by unshakeable provenance. It has been consigned by a direct descendant of Brigadier Sir Ralph Rayner (1896-1977). Rayner was commissioned into the Duke of Wellington''s Regiment, in which he served as a signals officer. He was seconded to the Royal Flying Corps in 1916. During the First World War he served on the Western Front and India. He then entered politics and was Member of Parliament for Totnes from 1935 to 1955, and was Knighted in 1956. Early in the war, Rayner rejoined the Royal Corps of Signals, fought with the B.E.F., and was evacuated at Dunkirk. Promoted Brigadier, he served under Major-General C.M.F. White, Field Marshal Bernard Montgomery''s Chief Signals Officer. On May 5, 1945, a day after the German surrender, Brigadier Rayner was order by Montgomery to establish contact with the Russians in Berlin. Very likely the first non-Soviet victor to enter the city, Rayner went to the Chancellery where Russian officers offered him a tour. On entering Hitler''s private quarters, Rayner was first offered Eva Braun''s telephone, but politely declined claiming that his favorite color was red. His Russian hosts were pleased to hand him a red telephone - the telephone offered here. Brigadier Rayner also left the bunker with an Allach porcelain Alsatian,likely gifted to Hitler as well (and offered elsewhere in this auction). Included with the lot is: the consignor''s very detailed notarized letter of provenance which fully sets forth his personal recollection of the telephone being brought to England and his research on its history; a 1977 newspaper article showing Brig. Rayner with the telephone; a Jan. 29, 1988 letter from Peter von Siemens to the consignor offering manufacturing details of the telephone and stating that the color was not typical of that produced by the firm; a copy of a photo of Luftwaffe aces Dieter Hrabak, Hans-Ulrich Rudel, and Erwin Hentschel at an awards ceremony in April, 1943 possibly handing Hitler the gift of a telephone; an original fax message (faded) with translation from ROCHUS MISCH (1917-2013), SS-Oberscharführer and a member of Hitler''s personal bodyguard, from Jan. 16, 1945 telephone operator in the bunker, states: "...From the photo I agree this was the red telephone that accompanied my Father [Hitler] constantly during the last two years of the war..."; photos of Russian soldiers in Hitler''s quarters, imprints of the telephone''s feet visible on the soot covered table (a failed attempt to burn the quarters had been made prior to their capture); a copy of a May 18, 1945 letter from Brig. Rayner in Germany to his wife mentioning meeting with the Russians in "a pile of rubble"; and a copy of a Sep. 9, 2006 letter from Rayner''s daughter also mentioning her knowledge of her father returning from Germany with the telephone. There are additional photographs and research further buttressing the authenticity of this incredible museum piece.

It would be impossible to find a more impactful relic than the primary tool used by the most evil man in history to annihilate countless innocents, lay waste to hundreds of thousands of square miles of land, and in the end, destroy his own country and people...with effects that still menacingly reverberate today. This was not a staid office telephone used to solicit contributions to the party, or to answer polite calls at the Berghof...this was Hitler''s mobile device of destruction, used in vehicles, trains, his field headquarters, at the Wolf''s Lair...and in the last desperate days deep beneath Berlin. While Hitler vehicles, tunics, accessories, tableware, and other personal items are readily available, an item of this importance with such solid provenance is offered perhaps once in a lifetime.
A video of the interview can be seen at https://www.youtube.com/watch?v=SUoynfNkArM.

ADDENDA: The handset to the telephone is not typical of those which usually were fitted to the Siemens Model W38. The ear cup of the handset and the handset itself are both marked "S.B.&CO. LTD" by maker Siemens Bros. in the UK, an independently owned one-time branch of Siemens Germany which until World War II was still actively trading on many different levels with its original owners in Germany. This receiver, in Siemens Germany''s stock, was custom-fitted to this phone simply to keep it from bouncing off the cradle while in transit. The heat-blistered paint on the body of the telephone and the braided cord match those seen on the handset and further prove that the handset is original to the telephone. Additionally, photographs shown here reveal that the interior of the telephone and its electrical fittings are original. They also show that the telephone and handset were painted red AT THE TIME OF MANUFACTURE. At some point in time, a section of the Bakelite body was broken and a contemporary repair was made with the entire phone repainted, certainly while in Hitler''s possession. This is evident as the paint over the repair (on the left side of the telephone) is uniformly crackled and blackened from the heat and soot resulting from the botched attempt to burn Hitler''s quarters in the Fuhrerbunker. Please see additional photographs.