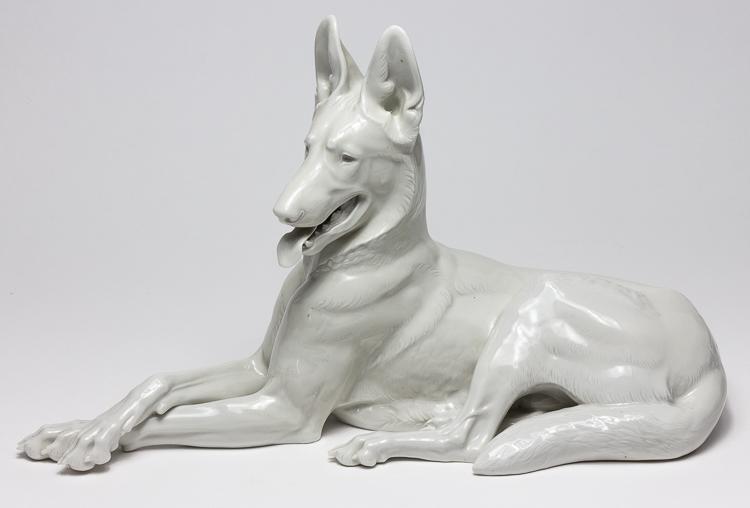 ADOLF HITLER''S ALLACH PORCELAIN ALSATIAN, TAKEN FROM THE FUHRERBUNKER
Adolf Hitler''s porcelain Alsatian figure, made by slave labor at Dachau and almost certainly personally presented to Hitler by Heinrich Himmler. The figure represents a reclining Alsatian dog, his front paws crossed, and it measures 17" long and about 10 1/2" tall. The piece is marked on the bottom: "TH. KARNER", with the number "76" with the Allach hallmark incorporating stylized SS runes. Fine condition, with absolutely no damage or repairs visible. This impotant relic is accompanied by excellent provenance, idential to that supplied with Adolf Hitler''s personal telephone offered elsewhere in this sale. It has been consigned by the daughter of Brigadier Sir Ralph Rayner (1896-1977). Rayner was commissioned into the Duke of Wellington''s Regiment, in which he served as a signals officer. He was seconded to the Royal Flying Corps in 1916. During the First World War Rayner served on the Western Front and India. He then entered politics and was Member of Parliament for Totnes from 1935 to 1955, and was Knighted in 1956. Early in the war, Rayner rejoined the Royal Corps of Signals, fought with the B.E.F., and was evacuated at Dunkirk. Promoted Brigadier, he served under Major-General C.M.F. White, Field Marshal Bernard Montgomery''s Chief Signals Officer. On May 5, 1945, a day after the German surrender, Brigadier Rayner was order by Montgomery to establish contact with the Russians in Berlin. Very likely the first non-Soviet victor to enter the city, Rayner went to the Chancellery where Russian officers offered him a tour. On entering Hitler''s private quarters, Rayner was first offered Adolf Hitler''s personal telephone, and as he left the bunker he was given the Allach porcelain Alsatian. Included with the lot is our consignor''s letter of provenance on eher personal letterhead, Sep. 9, 2016, in part: At the end of May, 1945 my father...returned from Germany with Adolph Hitler''s telephone and a large porcelain model of an Alsatian dog...My father always had Alsatian dogs as indeed did Hitler...My father told me that as we was about to leave Hitler''s apartments in the bunker he had admired the white porcelain model sitting on [Hitler''s] desk...He was then given the Alsatian by the Russians as a further good will gesture. I have kept the Allach model with great care ever since I was given it...". Additional provenance present includes: a copy of the telephone consignor''s very detailed notarized letter of provenance which fully sets forth his personal recollection of the telephone and porcelain being brought to England; three original photographs of the daughter holding the porcelain and a detail of the piece; a copy of a May 18, 1945 letter from Brig. Rayner in Germany to his wife mentioning meeting with the Russians in "a pile of rubble"; a copy of a 1977 newspaper article with photo in which Brigadier Rayner is shown with Hitler''s telephone; and a copy of a 2016 email from the Dachau Concentration Camp Memorial in Germany stating their belief that such high quality items were sent by the SS to Berlin. The porcelain factory "Porzellan Manufaktur Allach" was established as a private concern in 1935. In 1936 the factory was acquired by Heinrich Himmler to produce works of art that would represent, in his eyes, true Germanic culture. Production was based at Allach, the largest subcamp of Dachau, and it used slave labor in the production of these pieces. Himmler was especially proud of the porcelain produced at Allach, and made a habit of gifting the finest pieces to those close to him. It is therefore almost a certainty that Heinrich Himmler himself gave this figure to Adolf Hitler, who would have receive and displayed it with great pleasure.