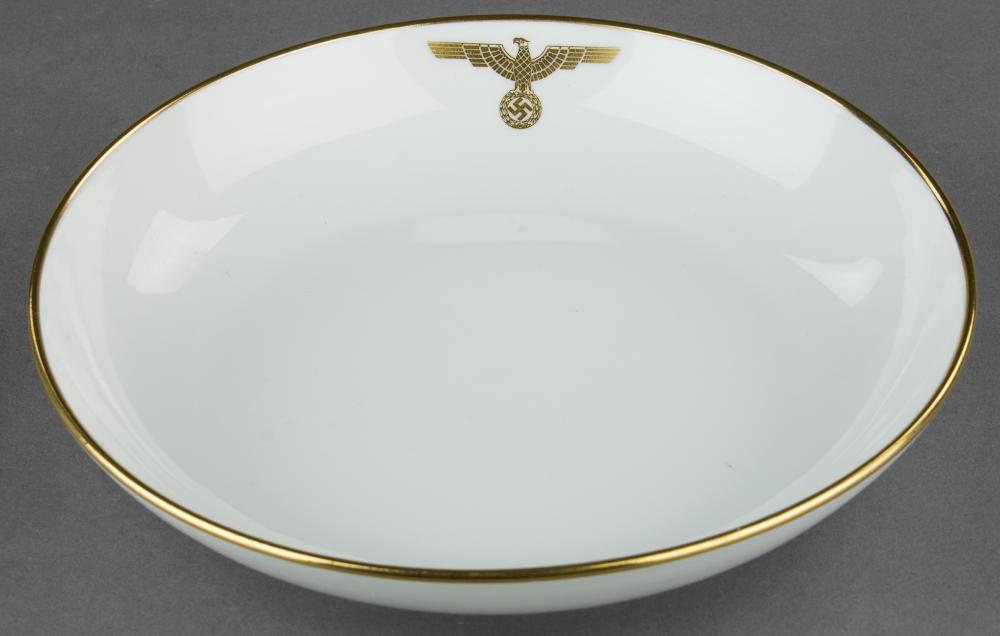 Description: An incredibly rare Hitler relic, a porcelain soup bowl owned by him during his stays at the Deutscher Hof - the hotel exclusively used by Hitler and the Nazi elite whenever they visited Nuremberg. The bowl, 8.25 in. dia. wide, bears a gilt national eagle at one side, with a band of gilding surrounding the entire lip. The bottom bears a dark blue-green maker's mark from the Nyphemberg Porcelain Company in Munich. Near fine condition, with no evident chips or structural damage. Hitler most commonly used Meissen tableware, though the Nymphenburg firm manufactured the formal dinnerware for smaller settings, including his train and Nuremberg's Deutscher Hof hotel. This pattern is shown in Tom Johnson's 'German War Booty', a hardcover manual of 'liberated' Third Militaria, bearing attestations from Traude Junge and Albert Speer that this style of tableware was used at the Deutscher Hof. Hitler was very often filmed reviewing parades and acknowledging the crowd from his suite's second floor balconies. This style of dinnerware is significantly rarer than those bearing his standard 'AH' monogram! From a large grouping of 'liberated' Nuremberg relics consigned to us from the estate of Captain Augustus B. Hill, the Chief of Real Estate and Land Resources of the Bavarian sector of the American military government. Nuremberg was the second-largest city within his jurisdiction, and his correspondence with the city's officials likely led to his collection of these pieces. Sold with a scanned copy of a letter of provenance from our consignor, who describes how Hill's property ended up in his collection.